This Was My Rolex

I had a bit of time to relax before show jumping, and took my time with our wardrobe change. I tried to focus on my breathing and avoid visualizing sliding stops into the base of each jump. It was hard. I went over my plan for the course with my trainer, which involved taking pretty much every inside turn option to cut off as much dead space in the ring as I could, and then went off to warm up. Once I started riding, my anxiety melted away, and my pony gave me another great warm up for stadium. Dino was slightly stuck behind the leg, but was still taking the bit and jumping well from a gappy distance even so. I jumped each fence at least once from each direction, and made sure to re-install the Wild Gallop button before I left the warm-up. 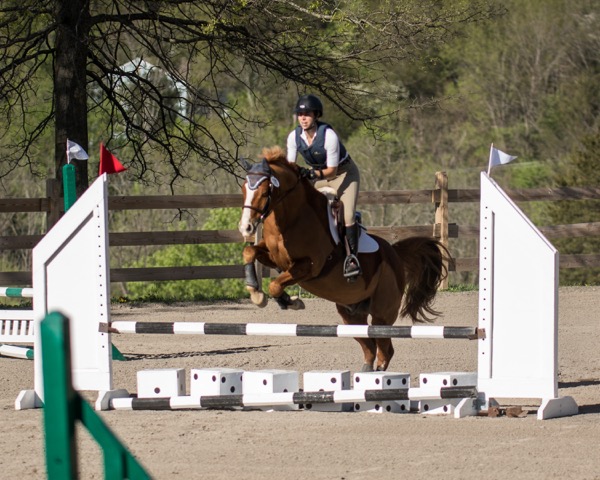 My plan for the course involved trotting at top speed into the arena, and picking up my gallop once we were headed back towards the gate, using the natural pull of that end of the ring to help get Dino moving. Euro Pony, however, knew exactly what was up and popped up into canter before I could even make the sweeping turn towards the gate. We were off! I aimed him towards Fence 1, put my leg on, and he popped right over. No first-fence-itis here! From then on out it was smooth sailing in the stadium arena. Dino was super forward, and in front of the leg enough that I could take a good feel of the bit and really manage his canter the whole way through. The couple simple changes we had to do were smooth and prompt, and he pulled me to every jump. I was seeing good forward distances, asking for them, and Dino moved right up and attacked the fences with gusto. Dino thought about spooking and stopping at fence 7 (because my 19 year old is sometimes wary of flowers, or something!?), but I just gave him a squeeze and he jumped anyway. I stuck with my plan the whole way around, even thinking on the fly on the way to 7 when I decided that I needed more time to organize and took the outside turn instead of the inside. We landed galloping on the backside of the last fence, and I gave Dino a big pat and told him what a good boy he was!

In the video, I just love how forward and flowing everything looks. Dino is taking me to every jump, he's into his job, and I'm right there for him as his pilot. I was thrilled with this course as a starting point for the season, and over the moon that I'd just had my first clear show jumping round in a very, very long time! Being able to get in there and rock around a course I was initially worried about was an incredible boost to my confidence.

I was feeling really good about cross country. The course was nice and flowing, I'd jumped very similar courses a bunch of times before, and none of the fences caused me any concern at all. There were options for the water and the ditch, but I decided on my walk to play it a little safe our first time out and just stick with the jumps for those obstacles. If things were going well, I'd school the water after the option jump, but otherwise I wasn't worried about it. There would be time for water and ditches later in the season.

Dino was a little sticky over the first two log fences, but once we landed off fence 2 he realized what was going on, and lit up. He cruised along in a great gallop and it felt like a hack in the park, just galloping away and hopping over the jumps in our path. We had one chippy distance at the ditch option fence - Dino wanted to LAUNCH it and our next fence was narrow and a short distance away on a downhill approach, so I didn't want him to land FULL SPEED AHEAD after the coop. I made him stuff in an extra stride, and looking back I wish I had sat up and compressed the canter earlier, but he jumped it just fine and we were able to navigate the next post-and-rail jump in a much more controlled fashion than Dino wanted to do it in.


After that, however, Dino started getting REALLY strong, and I was beginning to get too tired to manage his canter at that speed, so I ended up pulling him up to a walk to ride down the steepest hill on course before getting a straight line to the next jump and picking up the canter again. Dino pulled me over it, and then blasted off up the next hill to jump the coop ahead of us, and we finished strong with a powerful jump over the last coop and a gallop through the finish flags.

THAT'S A DOUBLE CLEAR, Y'ALL.

I had just finished on my dressage score on Dino for the first time in a LONG time, and I was absolutely ecstatic. Nothing could dampen the high of that personal victory! I hadn't yet checked the scores at this point and had no idea how I'd done in dressage, and I hoped I'd get a ribbon. There were thirteen in the division, and if everyone else had just dressaged better than me that day, that would be okay. The fact that we had truly done our absolute best in all 3 phases was reward enough. Dino was there for me the entire day, I did him justice by riding well, and that in itself was huge. I was proud of our performance, ribbon or not!

So after lots of hugs and smiles exchanged with my trainer and other friends at the show, I took my time taking care of Dino back at the trailer. I sponged him off with liniment and rubbed the sweat off his face. I massaged green jelly into his legs and let him graze while I organized my gear and started packing up the truck to leave. As I was wrapping his legs to load up and go home, the loudspeaker blared to life and they began announcing the results for my division, starting with 8th place and working their way up. I hadn't checked scores at all that day, and had no clue just how well I'd done in the dressage. 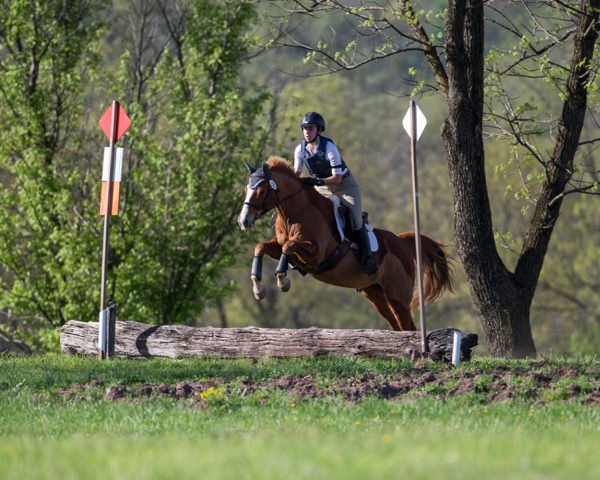 I listened intently as I wrapped my pony, hoping that maybe I'd snagged a spot near the bottom of those top 8 competitors. As the announcer continued on, I didn't hear my name. I felt a little twinge of disappointment as I heard 3rd and 2nd place announced, and neither was followed by my name and number. I'm used to my best not being better than everyone else's, and wondered how much I'd need to improve my dressage score in order to pin next time.

And then they announced first place, and I heard my name and my number and Dino's name: "And in first place, rider number 170, Allison Stitzinger riding Caradino." WE HAD WON. I stopped mid-wrap in utter shock and shouted, "HOLY SHIT!" and felt tears start to sting my eyes. I wrapped my arms around Dino's neck and squeezed, telling him he was the best pony, the very best pony! The girls at the trailer next to me asked if that was me that was just announced, and I said that yes, it was! I told them that I hadn't gotten my pony around a horse trial without a jump penalty in over a year and that I was so, so happy. They congratulated me as my trainer made her way to my rig with a huge smile on her face and gave me a big hug. I cannot accurately describe the sweetness of that moment. It was the culmination of years of  setbacks and tears and hard work and bareback winters and foxhunting and riding in rain, snow, sleet, wind, and sun. Trail riding and dressage schools and jumping lessons and always pushing, pushing, pushing past my mental hangups. Finally, FINALLY, it came together in all three phases on the same day and WE WON. 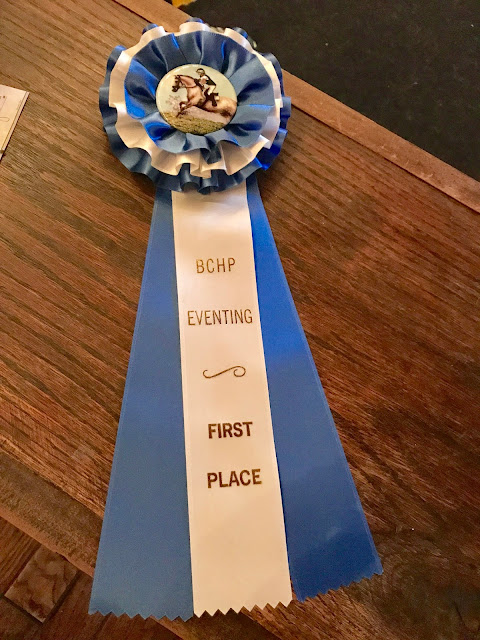 This was my Rolex. And I won it.