The Power Of Persistence

Anyone who knows me well knows that I'm stubborn. A bit like a certain redheaded pony we all know and love. It's a gift and a curse.

And I've been stubbornly working and persisting and not giving up on eventing despite how hard and disappointing it's been. There have been a lot of times in the past couple years when I wanted to give up, but I didn't, and everything finally came together at our horse trial this past Friday afternoon. 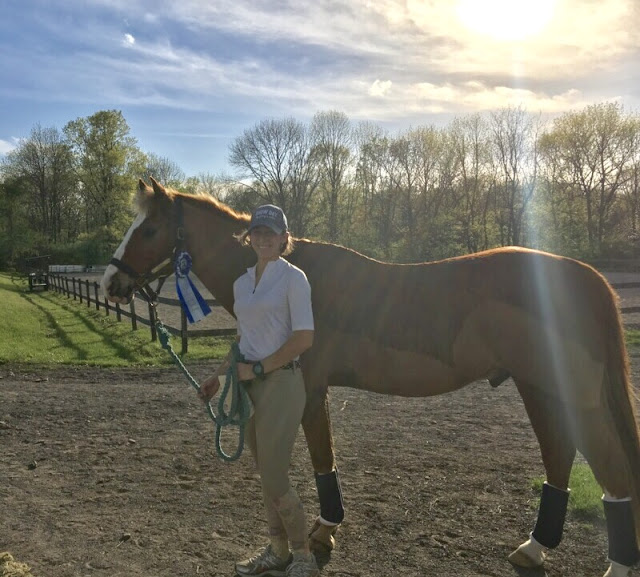 We won the whole damn thing, and it still feels like a dream.

I went into this horse trial without any huge expectations. I wanted to have a confidence-buiding first run of the season, and chose my first event accordingly. A laid-back weeknight schooling show at a venue I know very well was the perfect start, especially since I hadn't schooled cross country at all and hadn't had a jumping lesson since Dino catapulted me violently into the ground several weeks prior.

So, really, totally set up for success.

My goals were to ride with as much confidence and as little anxiety as I could, and if at all possible, to finish on my dressage score. Needless to say, I smashed those goals out of the park! I'll recap the victorious day in several posts, and we'll start with our arrival and dressage test.

The weather was absolutely gorgeous - 80 and sunny - but I was a little worried about Dino's energy level. It hasn't been that warm with any regularity here, and he's still very furry. The heat could very well make him more sluggish than usual, which would spell disaster for show day. I had him fed some extra soaked alfalfa cubes in the morning for a bit more pep in his step, curried off as much fluff as I could, and hoped for the best.

I wasn't feeling terribly optimistic when we pulled into the horse park. My stomach flipped and I felt like I wanted to throw up when I saw the stadium course as I drove up. It was set in the big main arena, which is HUGE,  and the course was just set so unnecessarily long with ridiculous amounts of space and long turns between fences. On a day when I was worried about Dino not having enough energy and enthusiasm to get the job done, the necessity of several trips up and down the big arena just to jump 10 fences was NOT comforting, and it was a totally different ring than the one I had been visualizing in my mental preparations. The long approaches also worried me - long straight lines give Dino more time to get unfocused, flat, and on the forehand, which could make me nervous and encourage a stop. But, first things first, there was a dressage test to ride. 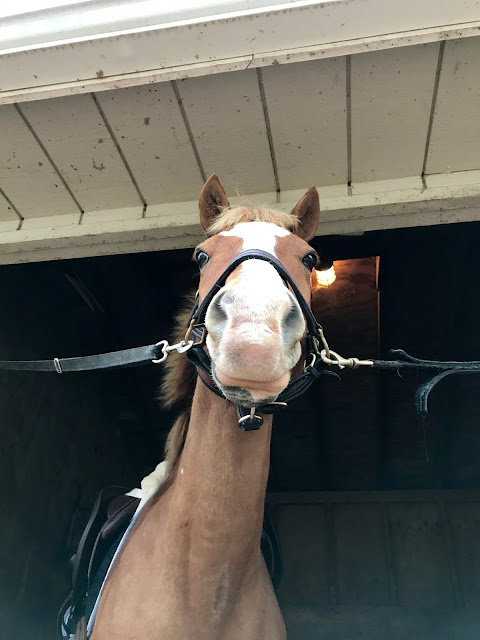 I was not feeling terribly confident about dressage, either, since our last couple rides at home were less than awe-inspiring. Dino had been sticky and balky, and our right lead canter was questionable at best. I put on his Magic Sparkle Hat TM and strolled down to warm up, giving him a few in-hand reminders to focus on me on our way down.

To my delight, Dino warmed up wonderfully and I kept my brain in my skull. He felt delightfully forward, and I resisted any urge to take up contact before he was cruising around and in front of the leg. And once I started riding, I just focused on what I needed to do to get Dino where I wanted him instead of freaking out about... everything else. I schooled lots of transitions, including the halt-rein back-canter exercise from the clinic last week until Dino was offering up forward movement at the slightest request. He got a little tense over his topline with all that work, so I finished out our warm up with lots of stretchy trot and free walk transitions in the open field next to the arena. We were ready.

And for once, I didn't totally choke when I trotted down centerline. I rode the entire test, focused on my pony instead of the movements, breathed, and NAILED the canter work, which is almost always our downfall. Dino flowed forward throughout the test, and while there were things that could have been improved as always, I didn't have to argue with him once. Dino was there for me during the entire test, and I couldn't have asked for anything more. I finished dressage smiling ear to ear!

Since this was a schooling show (my favorite kind of show!) the judge took a moment to chat with each rider after their test. She said our test was very nice (!) and that the canter work was very good (!!!). She gave me some good advice on how not to throw away points on the free walk (he didn't really stretch until after X because I stopped breathing in the corner or some such stupid thing) and commented on how great our second trot circle was after Dino had broken UP into canter for a stride or two.

I repeat: Dino. Broke into canter when he wasn't supposed to. WHO IS THIS PONY AND WHAT HAS HE DONE WITH MY DINO?!

I'd never been so happy for a mistake in a test in my life! No matter what the score ended up being, I was really, really happy with that test, and would gladly accept a score in the mid-30's for it. (spoiler alert: We scored a 30.0!) My awesome trainer was also there for moral support and as video crew, and was pretty darn pleased with the test, too!

You can see the slightly blurry video here:


I think this is one of the most forward and relaxed tests that we've ever put in. Dino just cruises along the entire time, and I don't look like I'm working overtime to get him to do it. We're both focused on the job at hand, and it makes me SO. HAPPY. Plus, knowing that if I hadn't had that mistake in the second trot circle and had ridden the free walk better we would have scored in the 20's is SO encouraging!

Even if the jumping phases went to hell in a handbasket (spoiler: they didn't), I couldn't have been more pleased with our dressage!