We had our first jumping lesson in a loooong time this week. The jump field at home is finally, FINALLY ready to roll and all the fences are up again, and we took full advantage of it with a weeknight lesson!

Riding with other horses in the jump field is still not his favorite thing ever, and sharing his space with Sully made him pretty cranky. Granted, we no longer have full-fledged tantrums in the jump field (THANK GOD), but our warm up didn't leave me with a whole lot of optimism about having a pony that was in front of my leg enough to jump.

We did, however, work on one interesting concept in the flatwork. Ms. Trainer had us riding a regular working trot on the short sides, and then lengthening down the long sides. Mostly I was just kicking and posting harder to get the lengthening, because my pony had a serious case of The Stickies. So she had us both pull up and explained to us what we SHOULD be doing with our hands and arms, which was decidedly NOT what I was doing. She asked us to weight our elbows down, which opened our chests, and then imagine pushing our fists forward into a wall without opening our elbows. So, in theory, we would give the horse space to lengthen their stride and frame without totally dropping the contact.

Thinking about riding the lengthening this way really helped me focus on the fact that I tend to release my hands down instead of forward, which causes me to break up the contact, and when I kept my elbows heavy and 'pushed' forward into the lengthening, it helped Dino stay with me a lot easier, as well as maintain his balance. It was something I really enjoyed experimenting with and will definitely continue to work on in the future.

The canter work wasn't great; the only saving grace being that I had the forethought to get light instead of over-active with my seat when Dino started to get balky in the canter, which he responded to much better than my usual manhandling.

But alas, there were jumps to be jumped!

Our jump field adds a little extra element of fun to stadium courses since it's not entirely level - the oxer rode either uphill if you rode it right to left, or downhill going left to right, and the approaches to each line varied as well depending on which way you were going. So you've got to adjust your strategy a bit depending on which way the ground is sloping, which increases the challenge.

We started off by riding the fence in the far lefthand corner (a crossrail) on a circle going to the right. So we came up the hill through the middle of the canter poles to jump the fence, making sure we had plenty of impulsion as we got going since the upward slope could steal some of the horses' oomph, causing them to putter out once the terrain flattened out and the jump was in front of them.

Dino, bless him, woke right up once he realized that we were jumping and absolutely nailed the first warm up jump several times.

Jumping the other fence in the line on a circle off the left lead, however, was a whole different story.

Dino tends to get stiff in the base of his neck and withers on his left side, making left bend challenging to attain at times. Our lackluster flatwork had not improved his left bend at all during this lesson, and riding downhill to pick up the canter, then turning and coming back uphill to jump our second warmup fence devolved into me pulling on my right rein to keep him out on the track, Dino counter-bending and/or becoming stiff as a board, and losing all softness and impulsion on our way to the jump, resulting in some pretty craptacular jumping efforts. (Note, however, that this did not cause me to panic and I just kept riding forward anyway. Win.)

So my trainer had me leg yield Dino off the left leg before even picking up the canter, and then continue that feeling of pushing his barrel out from my inside leg as we cantered up the hill and around to the warm-up vertical.

Wouldn't you know it, once we established a left bend and more softness through Dino's body, he was able to be so much more forward and the jump came up a lot easier.

Once I jumped the warm-up vertical with impulsion and left bend, it was time to start putting the course together.

The integral component here was the outside line with bounce poles in between the fences. It was set to ride in five strides on a 12-foot 'horse show' stride, but we had poles set every 10 feet, creating the framework for a bouncy, forward 6-stride line. As my trainer put it, these were the training wheels that would help us establish our pace and impulsion for the rest of the course.

When I came around to jump it the first time off the left lead, Dino was balky, dead-sided little monster. He broke from the canter before I could even make the turn, so I made the executive decision to skip the line and get him in front of my leg first. My trainer told me to come no matter what he was doing the next time - it's Dino's job to jump the jumps as long as I get him there and present the fences to him fairly.

Wouldn't you know it, that little punk cantered through the whole thing absolutely effortlessly the first time.

Our first course started with the bounce-pole line on the left lead, with a left turn over the oxer in the middle of the ring, and another left turn to sweep around and jump the other line (without poles) again in 6 strides.

I think all the left turns were purposeful. 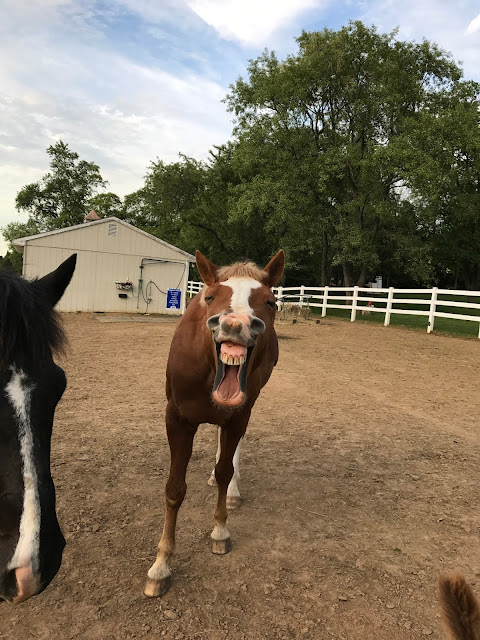 The bounce pole line rode really well again, but I was a little apprehensive coming to the oxer. It was a short four strides off the rail, going downhill, and while not overly-intimidating at 2'3", it was setting off my inner butterfly. However, I just kept coming and stayed in the backseat and kicked, and even though I got left behind a bit, Dino jumped the thing and I stayed on him and all was well. I re-organized and came through the outside line with no issues, though at that point Dino was forward enough that I definitely had to hold a bit to get the 6.

After that we switched it up a bit - bounce pole line coming from the right, right turn downhill over the oxer, left turn up the outside line. Again, the bounce pole line was great and I was a little backed off to the oxer. Instead of turning squarely to it, I bowed my line out a bit and rode to it in five strides from the rail, getting left behind again but still getting the job done. Dino lost some impulsion turning left to the last line, and I made the mistake of getting too aggressive with my seat, which really shut him down. We got over the line just fine, but I should have gotten lighter in the tack and leg yielded out to make the turn on the short side happen more smoothly.

We jumped that version of the course one more time, but not before my trainer put the fences up. Because I'm a weirdo, I measured them the day after. The first jump in to the pole line was 2'6", the oxer still measured 2'3", and the very last jump in the course was a solid 2'10".

And guys, we NAILED IT. I knew what mistakes I had made in the course before, and I fixed them. I rode much more confidently to the downhill oxer, making a more square turn off the rail and staying with Dino's jump this time, and instead of grabbing at Dino with my seat in the turn to the last line I floated him through and bounced him off my inside leg into my outside hand, making for a lovely approach to the last line and an explosive jump over the final "big" fence.

It was a great lesson for several reasons. One, I was able to rock & roll through our over-fences work even with a mediocre flat warm-up. I love that Dino is showing up to work each and every time we jump these days, and just clicking into gear once he understands that jumping is happening. Secondly, I LOVED the canter poles in the five-stride line. They helped develop great rhythm, balance, and impulsion right in the beginning of the course, and put Dino in the mindset of having to rock back at the base of the jumps and use his hind end well on takeoff while maintaining an appropriate pace. The poles created a really bouncy, adjustable canter and showed Dino what kind of canter I need from him. And thirdly, I jumped an oxer off a short turn going downhill without doing anything stupid or getting very scared.