Despite not having schooled cross country at all yet this year, this past weekend Dino and I were off to our second horse trial of the season, ready to kick some ass!

I am nothing if not aggressively optimistic.

Our whole barn went to Burgundy Hollow, and it was a really fun day overall. I braided Dino and Chance for the occasion, and we all hauled up together and hung out throughout the day. It was a nice, social change from my usual solo showing endeavors! Burgundy is also one of my favorite venues ever - they always put on such a relaxed, well-run show that is a positive experience for everyone.

In my last lesson before the show, as my trainer and I discussed strategy for the test, I told her that if I scored under 30 in dressage I'd be thrilled. I knew all the pieces were there, we had come SO close in our last test, and I just really wanted to meet that goal. Plus, at this level a score in the 20's would guarantee me a spot at the top of the leaderboard. So I stepped into the warm up ring with my game face on, and Dino did not disappoint.

He warmed up really well - forward, soft, and listening, and just got right to work and gave me everything I asked for. He felt 110% ready when the gate keeper called us several minutes before our scheduled time, so I opted to just head right into the ring and get it done.

Overall, I was very pleased with our test! Dino was definitely holding more tension in his neck and back than I'd like, but like he did at BCHP last month, he was right there with me through the entire test. We scored mostly 7's and 7.5's, with one 5.5 for our right trot circle that he cantered in AGAIN. I am clearly not used to riding a forward pony in the dressage ring! More half halts are needed. The free walk was, however, improved from last time and all of Dino's upward transitions were spot on. I would have liked him to be a little more relaxed over his back and reaching his neck forward like he had been in our lesson, but it was a pretty damn good test for us. We nailed our goal for the day with a score of 29.737! Starting the day off right in first place.

Time to take out braids, get a drink of water, and prepare for stadium!

I had absolutely no worries about the stadium course - it was a very soft 2' with almost no related distances. The turns were short and tight, but with a zippy 14.1hh pony, it would be no problem. Dino once again warmed up like a champ, carrying me forward over the warm up fences and feeling very confident. 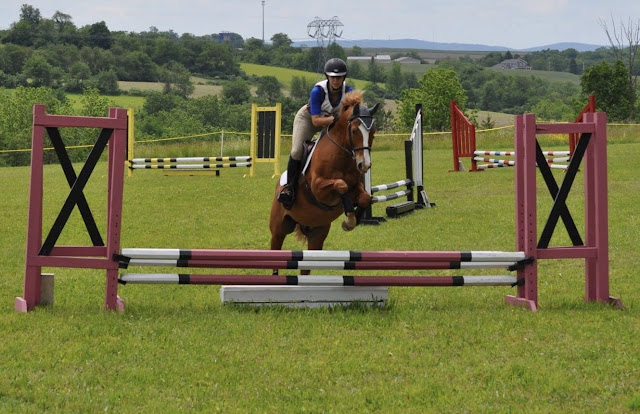 We took that confidence into the show jumping ring and cruised around the course. The jumps might have actually been a little TOO small - Dino was FLYING over the speed bump sized fences, and all I had to do was steer and half halt every once in a while. I probably could have finessed the ride a bit more, but it was fun to just blast around and jump the jumps! Needless to say, it was a clear round and we were still on top!

When I had walked the course earlier in the day, there were two elements that worried me a little. One was the up bank, which Dino had expressed confusion about before at this venue, and the red table. The table wasn't tall, but it was wide, and even though I'd jumped the BN version of it before, it's still a visually intimidating fence for me. Everything else looked like it would be a piece of cake, and I was fairly confident that with a positive, forward ride on my part we'd get around just fine.

Dino came out of the start box at a good canter, but I felt him start to back off as he sighted in the first log, asking, "Are we jumping this?!" I told him very clearly, "YES, SIR. WE ARE JUMPING THAT." And though he hesitated, he jumped Fence 1 just fine and we were off! The theme of the course, however, would be Dino's lack of confidence in just what exactly his job was on XC. He wiggled like crazy on the way to Fence 2, a small coop, and gave it the hairy eyeball and a good hard look before I kicked him over. Fence 3 was a cute little feeder, and again Dino felt hesitant, but was very honest when I told him to just GO! 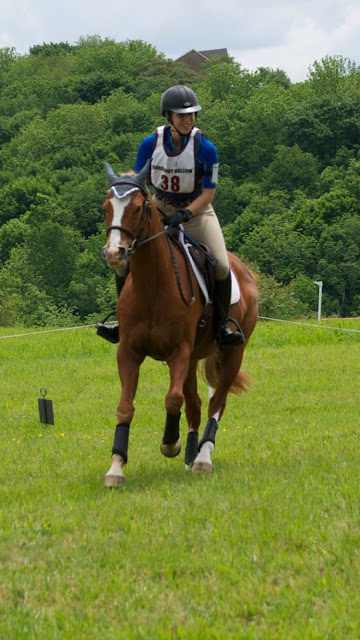 Dino landed off the feeder and TOOK OFF. The next fence was a rolltop set on a pretty significant downhill slope, and he was flying like a bat out of hell. Not in an encouraging "dragging me to the fences" way, but in an "Oh Lord I'm not sure he isn't going to crash into this fence" kind of way. With some very strong half-halts, I managed to slow him down enough to safely jump the fence, and then he blasted off again through the next element, a path down into and up out of the woods. Thankfully the steep uphill exit slowed him down a bit, and we were able to jump the next fence, a small ladder, just fine.

Then it was uphill again! Another small rolltop, then a left turn to the red table, which Dino took very nicely in stride and posed zero problems. We landed and Dino took off galloping up towards the bank. Again, he was going so fast that I worried he wasn't focused on the next question. I had planned to take the bank at a good forward trot, but Dino was running through the bit and the bank was getting closer by the millisecond. By the time he actually looked at the thing, we were practically on top of it, and he hesitated HARD and tried to run out to the left. Thankfully I was thinking and actively riding on course that day, and gave him a hard whack with my stick and kicked him up the bank from a near-standstill. We were off again, galloping towards the next fence, another coop that Dino jumped beautifully.

The last section of the course was a steep downhill run to another ladder fence, then a sharp left turn to a coop set into an arbor.

Dino, once again, was going WAY TOO FAST down the hill to be able to jump the ladder safely and make the left turn to the coop. There was no nice, balanced canter, there was only hell-bent-for-leather, flat-out running.

The pulley rein is a beautiful thing sometimes, folks.

I was able to wrestle him down to a trot to jump the ladder, and had to fight hard to get him around the turn and pointed straight at the coop. Thankfully he jumped the last two fences just fine, and we were done! Another successful HT in the books!

I wasn't sure how our ride at the bank would be scored - technically it could be counted as a jump penalty since Dino did turn away from the question before I reeled him back in and kicked him up it, but I knew the jump judges at Burgundy were also generally pretty lenient. First place might still be in my grasp if we were lucky, but regardless, it was clear that our cross country needed a lot of work. While I was really happy to have gotten Dino around the course as well as I did, I was also solidified in my choice to run a step below BN this season. Our dressage and stadium jumping may be ready for the next level, but cross country leaves a lot to be desired.

Unfortunately, I was watching Chance and his mom jump when the provisional scores were posted for my division and I didn't hear the announcement, missing my chance to contest any penalties that I may have been given at the bank. When final scores were announced, I was disappointed to find that it had been scored as a penalty, with that big fat 20 dropping us from first to fifth. 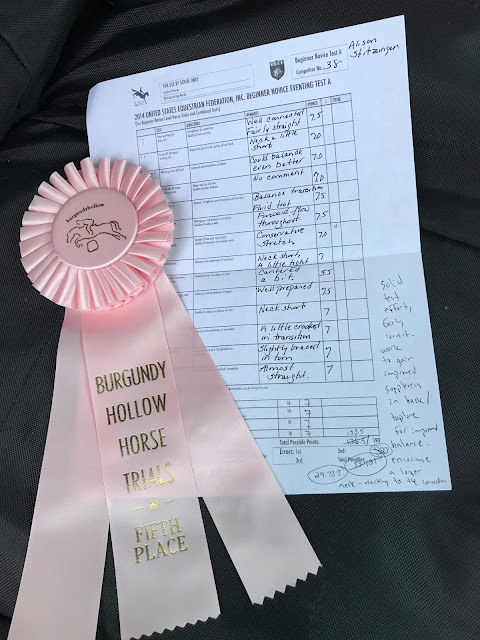 My barn mates were crying "Robbery!" but hey, that's horse showing. It was still a pretty darn good day for us all!

I walked away with a pretty pink ribbon, a third place team finish for Orchard Hill, a lifetime best dressage score, and a fire lit under me to keep working and improving before our next competition. It's a weird, wonderful feeling to actually be competitive at this sport, despite it being at the lowest level. I'm really, really enjoying our season so far, and can't wait for the next horse trial!
Email Post
Labels: horse trial