Kick On: A Lesson Recap


Well, I did schedule that lesson, and I am SO glad I did!

I told Trainer S that I needed some help jumping, and that I was looking to continue building confidence over fences. She totally, 110% delivered on that request with a lesson that combined work in both stadium and cross country.

I arrived in plenty of time to warm Dino up in the indoor, getting the go button operational with lots of big circles, transitions, and half seat. I was very firm about something happening when I put my leg on, every time, and soon we were motoring around nicely.

We started the lesson in the field next to the indoor, which was set with a small course of jumps. I gave my trainer a quick recap, telling her that I was planning on doing the 2'6" jumpers this weekend and BN at Burgundy Hollow next weekend. With that in mind, she structured the lesson with no warm-up jumps - just like at a show, we'd have to go in 'cold' and jump a course we hadn't had the chance to school first.

Before the jumping got under way, Trainer S had me working on my half seat at the canter, practicing being light in the saddle and not letting myself bob and wiggle around so much up there. I practiced going from posting the canter to half seat, finding a rhythm in the gait and lightness in my position. The goal was to be able to keep contact with my seat when needed without getting heavy and driving. It's a challenge for me, but something that will make Dino's job easier, and I can certainly keep working on it at home.

Then it was right into coursework! The fences were little, 2'6 max and many smaller than that, but the turns were challenging in the small field and many of the jumps were skinny, upping the stakes for straightness. We started with a skinny gate on the diagonal, which surprised Dino quite a bit. He backed way off to the first jump, but instead of giving up and letting him stop, I put my leg on and he went over. It was an ugly, underpowered, chippy jump, but he went! Then over a small section of black drainage pipe, around the short side to a skinny coop, around the other end to a one-stride on the diagonal, and over a tall, fat, skinnier section of pipe which Dino thought was inhabited by trolls.

It was not the prettiest course we've ever jumped, but I was happy that we got it done even over the spookier, skinny fences the first time! We continued working on different little courses, and I had a dumb run-out at the coop when I saw that we were coming in on the half stride and instead of closing my leg, sitting up, and waiting for the close distance, I totally just stared at the jump, abandoned my pony and let him squirt out to the right. Argh! It messed up my brain for only a minute though, and soon Trainer S had us back on track and jumping around just fine. 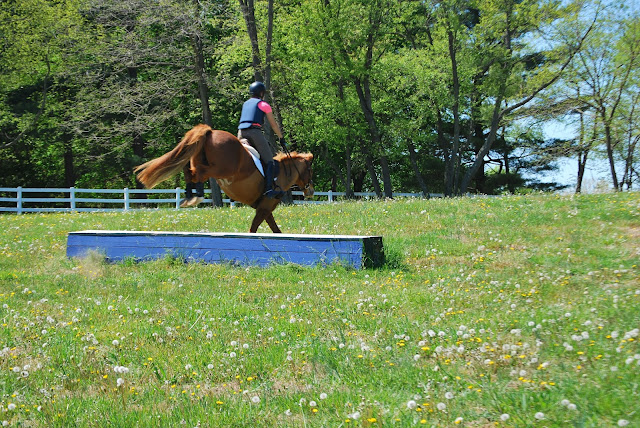 The other skill we focused on was how I rode the sharper turns and rollbacks. I was tending to look into the corner for too long instead of looking at the next fence, and actually using too much outside rein and leg, allowing Dino to get on the forehand with his inside shoulder instead of supporting it and helping him sit 'up' in the turns. A little more balance with the inside aids and the turns started to come together a bit better, though not perfect. More balance in the turns and corners also helped improve our simple changes when I needed them - without adequate inside aids, there was a lot of splatting going on in those changes!

Guys, this part of the lesson was SO. MUCH. FUN. I felt SO confident the entire time, and I had an absolute blast! We began with a line of 3 small log jumps along the fenceline, and it was nice to have the longer 'related' distances to get into a rhythm. Dino was jumping great and I was focused and committed to getting to the other side of everything. After that, we started stringing together small courses. We jumped the three logs to a BN-sized hanging log with rocks under it, jumped another log, made a rollback turn to a steep mound, jumped a skinny black pipe at the top of the mound, came down the mound, and back over the log and hanging-log-with-rocks. Aside from the rollback turn to the mound being tighter than I thought it would be, the whole thing rode AWESOME! It felt SO good, and when Dino wiggled I didn't doubt myself, I just closed my leg and rode forward. The little logs were coming right up out of stride, and the whole thing was just great! We did a similar course a second time, except the small hanging log was replaced with a Novice-sized log-with-rocks-and-other-logs. Dino wiggled hardcore to the big jump, and I DID NOT BAIL. I closed my leg, I rode forward, and we jumped it and kept going.

We made our way across the stream, which Dino handled like a champ, to the far fields where more jumps were set up. Trainer S laid out a small course for us: stacked logs, long right-rollback to a skinny brick wall, short left turn to some barrels, and a long sweeping line to stacked railroad ties.

It was frickin' GREAT. Dino was starting to really pull me to the fences, the logs came up perfectly out of stride, and even when I misjudged the turn to the barrels, we worked it out just fine. We were on fire!

We moved on to the last field, where my trainer instructed me to jump a tiny baby log, then loop around to the [GIANT, POINTY, VERY SKINNY, VERY BIG] Novice coop, and continue around the field to a smaller skinny coop, and then to a gate.

The baby log jumped fine, and as I came around to the big coop it seemed to grow taller and taller as we approached it. I stared at it. I stared HARD. I stopped riding. Dino stopped right at the base.

Trainer S laughed and chastised me for staring at the fence, and told me to stop staring, look up, use my peripheral vision, and keep my leg on.

Whaddya know, that worked and we jumped it, though it was definitely discombobulated and messed up our approach to the next coop, and the gate after that, which resulted in a stop because I was crooked and not thinking or using my legs. Whomp. I re-approached the gate and jumped it. 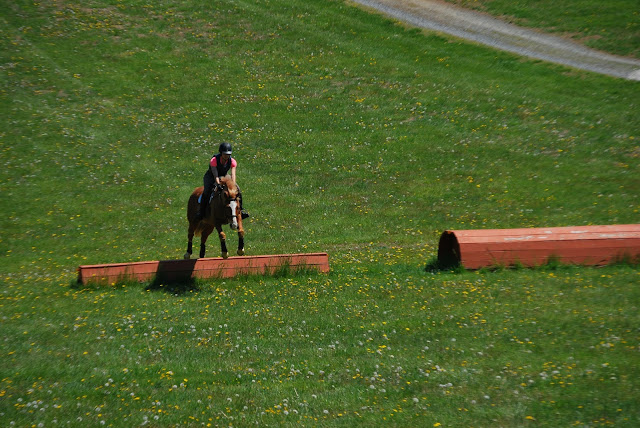 Then it was time for banks! There was a pseudo-'bank' that dropped down into the woods from this second field, and we popped up and down it a few times before putting together a course.

We started down at the stream, trotted up and around to the first field where I picked up the canter and jumped the stacked logs - brick wall - barrels - railroad ties, rode into the second field and jumped the gate going the other way, down the bank, looped around in the woods, up the bank, jumped the small coop, and finished with the big coop.

IT WAS SO FUN!

I really wish I had a helmet cam to capture the coolness of looping in and out of the woods, but guys, this course was one of the most fun, best XC rounds I've ever done. Dino was pulling me to the fences, and I let him roll forward instead of pulling back. Jumps were coming up right out of stride, we nailed the turn to the barrels this time, he was a champion up and down the banks, and we NAILED the last big coop! I saw my distance, picked my eye up, and spurred Dino to the base so that there was no question we were GOING. I was so, so, so happy with everything! Trainer S was going to take some video, but at that point her pony started rearing so I don't have any media for you, unfortunately!

We ended by working on trotting down a steep bank into the water, and as long as I supported and was confident, Dino did great.

This lesson was exactly what my brain needed - I left feeling so confident and accomplished, and totally prepared for Burgundy Hollow next weekend. I don't think I've ever had such a low level of apprehension on XC. But, to summarize the major themes and take-home tidbits:


I am feeling SO ready!