On Sunday Dino, Sully, Sully's Person and I all headed to a local H/J show to do some jumper rounds. I was planning on doing the 2'6" division, the goal being to get out to a new venue, jump some jumps, knock the rust off, and have a good time.

Spoiler: We totally accomplished all of that. And more!

As is usual with local unrated hunter shows, everything was running painfully slow. When I called the office at 10:30 am to see how our ring was running, I found out that they were still working through the first two hunter divisions. Which had started at 8. We took our time getting to the show and arrived around 1pm. Things were still moving really. Really. Slowly. We took our time checking in, and moseyed around the show to get the lay of the land.

Luckily for us, Sully's Mom is the kind of woman who knows someone everywhere she goes, and we were soon chatting it up with the very kind and lovely woman who was the owner and head trainer of the farm, and she said that she would open a third ring for the jumpers so we wouldn't have to wait for the hunter divisions to finish before showing, and that it would be ready "soon".

Two hours later, we casually tacked up and headed over to the jumper ring to school. Since there was no other designated schooling area, we actually got to jump the fences we were going to show over, which was kind of nice. I went in and schooled with the 2' riders, just to get on and get Dino around. He was feeling good, although decidedly NOT a fan of the very wet, very sloppy footing. Thankfully it was not slippery, but it was very heavy in spots.

I then dedicated myself to learning my courses and jump-offs (OMG SO MANY JUMPS) while the 2' division got under way, figuring it would be done in less than an hour. 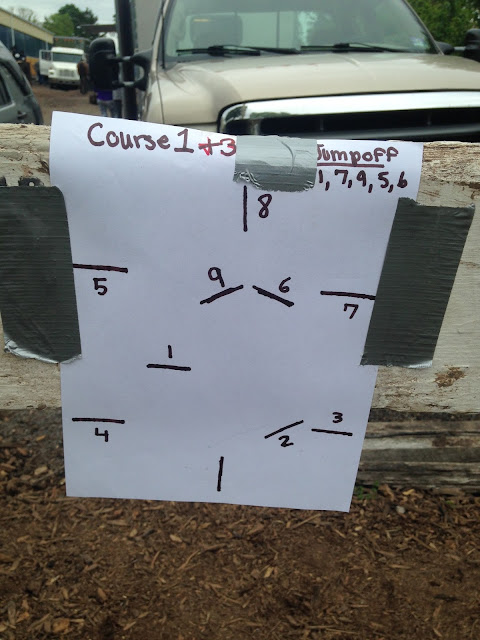 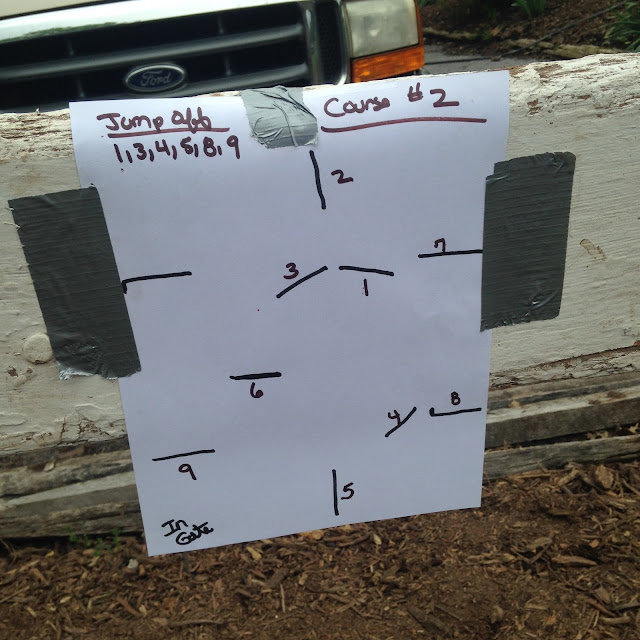 It soon became apparent via the appearance of about six more 2' jumper riders and the massive quantities of dead time in the ring where NO ONE WAS JUMPING ANYTHING, that the 2'6 division would be a while. I got off my pony. He napped like the seasoned show horse he is. We took a walk. Chatted with friends. Eventually, FINALLY, they started setting fences for the 2'6 and I hopped on to school over actual competition height jumps.

Dino felt great - moving forward, but taking the long spot most of the time. I would have to manage his canter a little better and get him more "up" and in front of my leg to make the better, closer distances happen. But he was going, we were jumping, we were going to DO THE THING!

As tired as I was of waiting, I got myself in the ring second. I knew the course, we were ready, I wasn't nervous.

Dino was a complete and total BAMF. While the round didn't feel as polished as it could have been, we went in there and got it done. He was out in front of my leg, he was super game in the rollbacks (which were no joke!), and was jumping out of tight turns with only one or two straight strides, taking every distance I asked for. I was THRILLED! 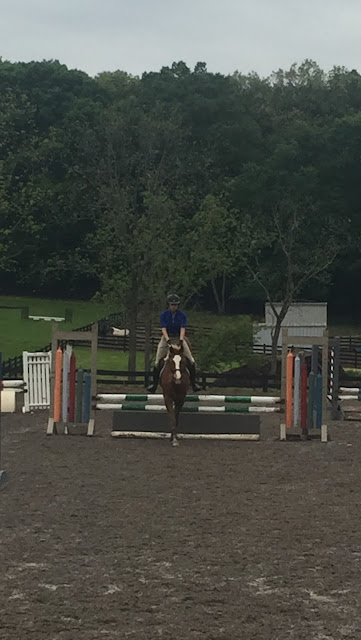 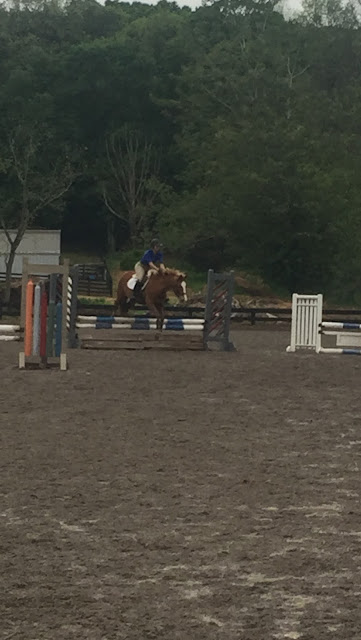 After a short break, we went right in for our second round. Dino got super cranky about having to pick up his canter in the sloppiest side of the ring, and we ended up trotting the first fence. Whatever, he's gonna learn that going forward first makes his life a LOT easier! After that, the course flowed really smoothly, and the all-rollbacks-all-the-time jump-off round was glorious. Nailed it! 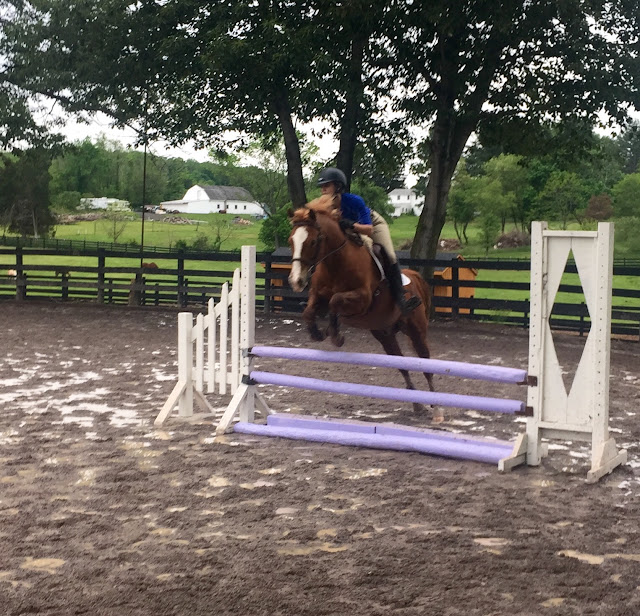 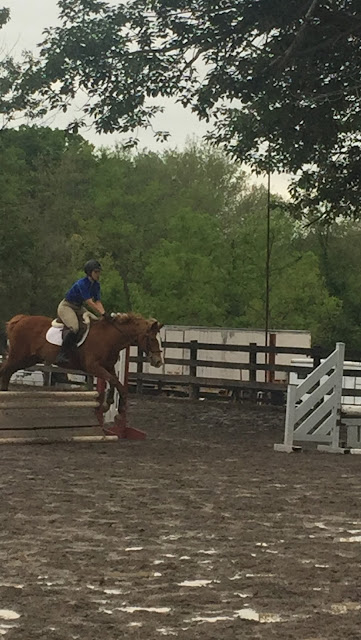 By the time we were ready for round 3, we were both definitely tired! Dino took his sweet time picking up the canter to our first fence, since pooping and cantering are not things we can do simultaneously, apparently. But after we got going, things went fabulously. Again, Dino was totally game for everything and really brought his A-game to every fence. Unfortunately, after we landed from the first fence in the jump-off, my mind went COMPLETELY BLANK and I totally forgot where to go. I pulled up and asked the gate person where my next fence was, she told me, and we finished up in fine style.

We snagged 3rd, 4th, and 5th place ribbons for our efforts, and I could not be more ecstatic with how things went! I had three great, no-butterflies jumper rounds, there was not a moment of hesitation for me or for Dino, and although the rounds were not as sharp as they could have been (omg could my reins GET ANY LONGER?!), I got in there and got it done with a smile on my face. It was EXACTLY the season opener I wanted it to be - fun and confidence-building! Video below:

As a very tired Dino and a very tired me walked back to the trailer, our friend snagged us and told me that they needed someone to fill the Long Stirrup division, since they only had one entry and the lone Long Stirrup rider really needed to show one more time before showing at a big, rated venue the next weekend.

I happily volunteered to fill the division, and headed to the indoor in our jumper attire to do some walk/trot classes.

Dino, bless his heart, was a TROOPER and such a good sport about it all! Despite just having done an entire jumper division and thinking he was done for the day, my WonderPony marched right in there and did three flat classes and a crossrails class with no complaints. No tantrums, no sass, no pony'tude, homeboy just went and did his job. He was freakin' FANTASTIC. And we got some shiny blue ribbons to add to the collection after winning the w/t/c and crossrails. The other horse BEAT US in the walk/trot and we had to settle for second place. The horrors!

While part of me never, ever wants to go to another show without ride times ever again, I am totally thrilled with how this show went. I had so much fun, Dino was a total champion, and we got some great rounds and experience in the jumper ring. I know that most BN stadium courses will not be as complex and difficult as the courses we jumped on Sunday, and I am so incredibly proud of how Dino performed. A few years ago, we could not have done what we did this weekend, much less gotten in the in-gate without hysterics. As I watch the videos, I see a confident, competent pair, and that is EXACTLY what we have been working towards these past few years.

I am over the moon!