I'd like to say that this was the horse trial where Dino and I FINALLY made it through a BN cross country course without a stop, and finished on our dressage score.

This unfortunately was not that day.

However, it wasn't a total loss, and I do feel overall that WonderPony and I are making progress. We are essentially right where we left off at the end of last season, which, in the grand scheme of things, is nothing to be overly upset about.

It was stupid-hot, and you know it was stupid-hot because I didn't wear a jacket for dressage. I almost NEVER skip the jacket. If nothing else, I am very vain about my turnout, since I like to look polished and put-together while being a total shit show, but Sunday was just way too hot at near-90 and humid. Dino was, however, sporting some really fabulous Dutch braids thanks to Austen's awesome tutorial! 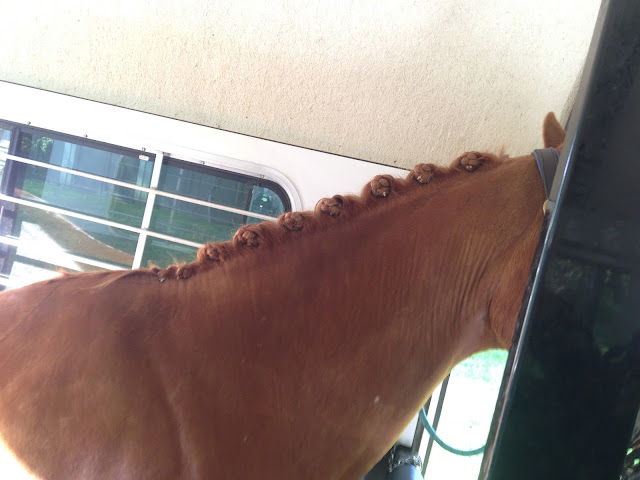 Euro Pony was definitely a bit sluggish in the dressage warm-up, and while Dino was generally obedient, he felt lackluster and little slow off the aids. I didn't have quite as much 'oomph' as I wanted, but warming up longer would only make my pony more tired, not any sharper, so we went in for our test without me feeling that he was truly on the aids and ready to rock. In the heat of the day, his energy levels weren't going to get any better with more schooling, so I had to work with what he was giving me.

Our test was nothing special, but definitely not our worst test ever. I was too tense in my arms (as per usual) and the canter departs were inverted, but we got it done for a score of 36. Not too shabby for a "meh" feeling test, and I know that the heat played a big part in how Dino performed.

Stadium, however, was AWESOME. Dino was on fire from the second we stepped into warm-up, and I only needed to jump about four fences before I felt he was ready to rock & roll. We were on the same page and attacking the fences, and we both felt extremely confident. We entered the ring, and without any prompting Dino picked up a canter and moved into an awesome forward pace when I asked. The entire course was basically flawless, and I finished stadium grinning like a fool. It was smooth, consistent, forward, and FUN! There was not an awkward distance, missed lead change, or unbalanced turn to be seen. I had a blast! All of the work I've put into our stadium performance over the last few months has totally paid off, and it felt incredible to go in there and completely crush that course.

Dino practically strutted out of the stadium ring, and I was feeling really good about XC. The fences all looked totally doable, and the only thing I was really concerned about was having enough gas in the tank in the hot, humid weather. On my course walk I made it a point to look at the Novice fences as well, to remind myself that BN is No Big Thing, and to my delight there were only one or two jumps on the Novice course that elicited an, "Oh Hell, Naw" reaction. I felt we were ready to tackle cross country.

I came out of the start box riding as aggressively as possible, but Dino seemed unaware that we were actually, you know, starting cross country. He sucked back behind my leg, and despite my kicking and Mr. Sticky, he stopped at the first fence. I gave him some serious whacks for that one, because that is no longer OK in the least, came at it again, jumped it, and continued on. The next two fences rode just fine. Fence 4 was definitely the spookiest on course, shared with Novice and set in a shady row of trees with a downhill landing. While Dino peeked at it, he jumped right on over, and I aimed him at the big table at Fence 5. However, our rhythm was disrupted by the peek-and-bunny-hop at Fence 4, and Dino sucked back and stopped again. More whacking, turned around, jumped the table. The next two jumps were uneventful: the ditch at 6, up the hill to a small log at 7. I wasn't anticipating any issues at the up bank at 8, but Dino got his eye on the Starter bank vs. the BN bank, and he almost stopped/ran into the flag before climbing up over the bank. Still, he went, so I'm not too upset about that one.

Fence 9 was a hanging log that jumped fine, and Fence 10 was a big rolltop at the top of the hill. Again, Dino dropped down out of the good gallop rhythm we had for some unknown reason and got crooked to the rolltop, where he stopped again. Of course, he jumped it fine on re-approach, as he always does. We finished the course well, jumping the log at 11, walking into the water at 12 and then trotting out, trotted the small coop at 13, and finished up jumping the feeder at 14 without issue.

Miraculously, even after I had to correct my score with the show manager because they only had me down for one stop on XC instead of three, we still got an 8th place ribbon! I didn't fall off or get eliminated, so there's that.

My first reaction to our XC run was frustration and disappointment. I was feeling SO ready for this show, and I really wanted this season to be the season of no more XC penalties.

After talking it over with Rachel for close to an hour, I'm feeling a lot better about how things went. It's obvious that this course was MUCH better than our last run at Flora Lea in the fall - 3 stops definitely beats the approximately 17 stops I had on that day. And I realized that I am so much more confident than I was last year. The jumps don't scare me anymore. In fact, most of the Novice jumps on this course didn't scare me on my course walk. But even though I believe that we are capable, Dino doesn't yet. My lack of confidence on XC over the past year or so has essentially trained him to be hesitant, and even though I've improved, Dino still doesn't trust me that I mean it when I say GO on the XC course, because I've gone back on my word so many times with him.

I've also noticed that the stops happen when we lose the forward rhythm. When he's out in front of my leg, Dino inherently seems more confident about the jumps. With that good forward gallop, the fences ride more like speed bumps on our track instead of huge, intimidating obstacles that I have to set him up for perfectly. It's like floating along on a rushing river, or riding a roller coaster, instead of facing down once fence at a time. When Dino isn't rolling forward on cross country, bad things happen.

The pattern was made pretty obvious on this course - the stop at the first fence came because we had nowhere near enough momentum out of the start box. The second stop, because Dino was backed off to the fence prior, and landed behind my leg. And the last stop came when Dino dropped behind the rhythm as he neared the top of the hill and slowed way down.

I think the issue is partially Dino's lack of belief in me and lack of confidence, and partially my needing to re-install the go button on XC the same way I've done in stadium. There's clearly a serious lack of respect for the leg out there, and I freely admit that I've built a terrible pattern of shutting him down out of fear when he got "too fast" for my comfort level. I'm getting some lessons lined up for the next couple weeks, and hopefully we'll be ready to come out swinging for Plantation next month. Trainer S will also be there coaching, which is a big relief!

In the meantime, I'm taking hold of the small pieces of progress we've had thus far, and settling into the grit, determination, and pony'tude I need to keep moving forward. As Rachel reminded me during our conversation, there was a time not too long ago when getting around a 2' equitation course at a local show was a Big Freakin' Deal for me. We've come a long way, and now I know and believe in my heart that I've got the guts and skills to get it done. I just need to convince Dino that it's true.

This year, we WILL run a clean XC course. I'm not going down without a fight.