Our First BN: A Tale of Survival

It's official, we did it! Dino and I finished our first Beginner Novice horse trial, and man it feels good to have gotten through it in one piece!

Well... sort of in one piece. Dino decided to remove a pice of his blaze before we even got on the trailer, a la Courage: 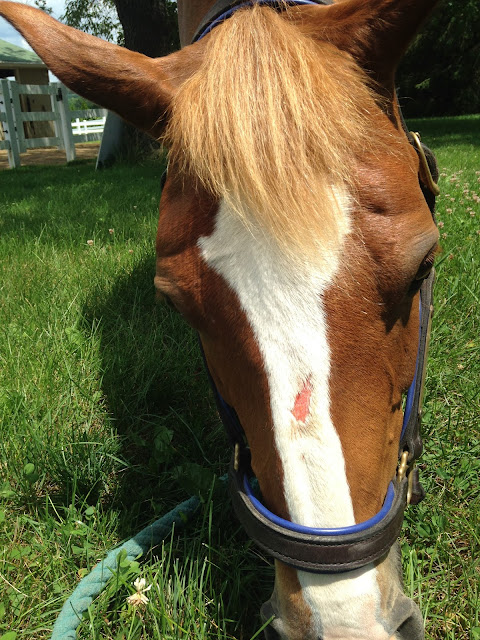 I was irrationally upset about this. There was no blood, no swelling, he just took off some hair with his halter when he thought his precious donks were in trouble and tried to bust out of the crossties to 'rescue' them. Chivalry and whatnot. But RIGHT BEFORE WE LEAVE FOR A SHOW!? Not cool, man. Not cool.

In any case, Becky (Dig My Size) arrived shortly thereafter to be my wonderful groom for the afternoon! Everyone who was supposed to be at this show with me ended up not being able to come, so I was beyond thrilled and grateful for Becky's offer to come hang out! She's a total lifesaver.

When I went to the show office to get my pinny and the course map, I was met with quite a surprise.

The show secretary informed me that the BN course maps weren't correct, but that the course was EXACTLY THE SAME AS THE RECOGNIZED EVENT and helpfully let me know what color the number flags were.

The prize list for this HT said that the cross-country courses were soft, move-up schooling-level courses with options for the tricky stuff. This was the main reason why I decided on this event as our first BN outing.

But instead, THIS WAS A MAX HEIGHT RECOGNIZED COURSE.

I was, to put it mildly, freaking out a little.

Becky and I walked the course, and while most of the fences looked doable, there were a few that made my stomach turn. Namely THE scary green bench from schooling on Monday, the ramp one stride out of the water (that had no option, just so you know), and a seriously huge-looking pile of logs off of a short turn through the woods with questionably deep footing. There were a couple other jumps that I just sort of glanced at and walked past, not wanting to really know how big they were.

But I had to put it out of my mind for a little while, because there was a dressage test to be ridden! Dino warmed up absolutely great - he was in front of my leg, soft in the bridle, and really starting to move well over his back and into my hands instead of getting heavy or resistant.

Unfortunately that didn't carry over into the show ring. We trotted down centerline and I could feel the tension creeping back, and as we turned the first corner Dino started bulging against my inside leg and he felt stiff as a board. Our trot work to the right was okay, but my pony wasn't giving me his best effort by a long shot. Once we changed direction to the left things got better, until we approached the first canter depart. My pony felt like he was about to stop and poop, or just totally otherwise quit on me, so I had to boot him into a rather ugly canter transition. Thankfully he pulled it together once we were in canter, and we actually had a pretty ok first canter circle.

Then I forgot the second trot diagonal, and started walking instead.

The judge rang the bell for my error and I immediately knew what I did wrong. I was SO mad at myself! I KNEW that that second change of direction was one I needed to keep in mind, but I just totally missed it. I regrouped and finished the test, riding all the correct movements this time. It wasn't the best ever, but I was pretty darn happy with our free walk, and the last trot down the centerline was quite nice. The halt was a hot, un-square mess that happened somewhere before X, but it happened.

It was certainly not our most inspiring test, but even with the error we scored a 37. Not too bad, considering!


As you can see there were some pretty ugly parts of that test, but I do think that Dino's connection and throughness are showing overall improvement, even though it's not 100% consistent. SOMEDAY we will not totally screw up the dressage and we'll get the awesomeness we have at home in the show ring. Someday.

We only had about fifteen minutes to get my vest on and slap some boots on Dino, and then it was off to stadium!

The course walked well, I wasn't concerned about any of the jumps themselves, and I made a plan to ride some of the trickier turns. No big deal. Dino also warmed up AWESOME, and he jumped so well and with such a big bascule over one of the warm-up oxers that I'm pretty sure his withers made contact with my chest. He was locked on and ready to roll!

Dino jumped everything like a champ, but I was almost TOO relaxed about this phase! I should have been on top of my canter a bit more to create a more powerful, bouncy canter all the way around the course instead of going back to my bad habit of holding to the base. We had a serious miscommunication about the distance to Fence 6, and my WonderPony jumped it from a SUPER awkward distance for me. Even so, we jumped clear. Phase 2 done. Video below:

Let's be real, I was terrified about this XC course. I was NOT expecting a max-height course with no options. I was seriously doubting whether or not we'd be able to finish. While it wasn't trappy in the least, it was not the friendly, soft course I had envisioned.

Dino warmed up beautifully again, jumping really well and boldly over the warm-up fences. I jumped the crossrail once and the oxer twice, and with that we were ready to go.

Fences 1-3 rode great. I made sure to get in the back seat and ride strongly over the first two until we got into a rhythm, and Dino rose to meet me, jumping each fence with room to spare. Fence 4 was a wide feeder/table thing that had a downhill landing side. Dino started off coming to it pretty boldly, but as we got closer I felt him get unsure about it. It was the biggest jump on course thus far, and even though I got him to a good distance, he couldn't read the landing side very well and stopped. I felt discouraged, but circled back and tried again, and Dino jumped it wonderfully on the second try. Unfortunately we had another stop at Fence 5, the chevron, partly because of Dino's uncertainty, and partly because I didn't ride as straight and strongly as I should have. I AM happy, however, that I didn't PULL him to either stop! Again, we circled around and Dino jumped it beautifully.

After that, we had no more stops, but it was far from smooth sailing. We jumped (very large) Fence 6 from a crawl, but nailed Fence 7 and the water at 8, and Dino took charge jumping the ramp one stride out of the water at 9. Fence 10 was actually super straightforward, and 11 was just a jaunt over a giant steep hill, similar to the Mound at Flora Lea. 12-14 all jumped very straightforward, and THEN... I had to jump the giant, horrifying green bench. I half-halted Dino really strongly after he landed a bit flat from the ditch, sat him on his butt, and rode a big, bold canter to a longer distance and told Dino we were JUMPING. And he did! Fabulously! After that, there was one more fence. This steppy-thing (Produce stand? I don't know the proper names for these XC fences yet!) that looked kind of big and scary, but I pulled out my last bit of energy and oomph and rode it just as confidently as the bench. We flew across the finish line, and our first Beginner Novice was complete!


Honestly, after that challenging run I was just happy that we finished! With 2 stops, I wasn't expecting to be in the ribbons at all. And that was okay - we had made it through our first BN alive, we had survived a serious XC course, and that was a pretty great achievement in itself.

To my surprise, as we were getting ready to leave, the announcer gave the placings for my division, and announced Dino and I for FOURTH PLACE! WE WEREN'T EVEN LAST! That ribbon was just the icing on the cake, and I'm excited to keep improving so that next time we won't just survive, we'll perform.

I can't believe that Dino and I completed our first Beginner Novice this weekend. Just a year ago, I was having a complete meltdown over schooling the tiny Starter fences, and was freaking out about entering our first horse trial. We had FOUR stops on XC at that first HT, at much tinier, friendlier fences than what we jumped this time. I honestly never thought I'd be brave enough to do this. I never thought I would be eventing, much less willingly taking on the huge challenge of the course we jumped at this event.

I hardly even recognize myself anymore as a rider, but I like who I'm becoming.