Another horse trial is in the books for Team PONY'TUDE!

Huge shout-out to Jenn who came out to be my groom & moral support for the day, and to Michael for driving the trailer even though he was so tired that he napped in a hammock all day at the show. You guys rock!

I was SO nervous about this show the night before. Logistics really freak me out, and the fact that we were going to a new venue that was further away, and I didn't know the layout of the show grounds, or what the arenas would look like, or what to expect on cross-country, etc. was really making me anxious. I ended up buzzing around the house cleaning things until almost midnight because I just couldn't calm down! Needless to say, there wasn't a whole lot of sleeping going on the night before Flora Lea. I woke up a few times in the middle of the night in a total panic feeling like I was about to puke.

Thankfully, once I got to the barn to get ready on Sunday morning, having something to do really helped me calm down. Dino had stayed pristinely clean overnight, so I barely had to do anything to clean him up! I had given him my special tail treatment the day before, as well as scrubbed his white stockings and clipped up his face. Homeboy looked gorgeous.

As usual, it turned out that I had absolutely nothing to worry about. We arrived at Flora Lea with over an hour before my dressage time, and I was able to take my time getting the lay of the land, checking in, taking Dino on a walk around the grounds, and doing the first walk of my cross-country course.

I was also really pleased to see that dressage warm-up was located in a gently sloping field. Score! It's  kind of footing and atmosphere (no fences) that I know Dino is really comfortable in, so I was really happy to see that I wouldn't have to try and get Mr. Cranky moving forward in a crowded schooling ring. No reason for a tantrum = good day.

Dino was on fire at this event - super game and forward! He bounced right into a forward trot the second I asked, and I knew that I'd need minimal warm-up time to get him going. Canter departs were instantaneous, and there was plenty of "go" at my disposal. After a really discouraging week of schooling at home, it was awesome to feel my pony so ready to go. While Dino was a little heavy at times, it was nothing like our past couple schools at home, and I was really pleased with how he was going so far. I did some leg yields and shoulder-in to get him more balanced and stepping under, and we were ready to rock!

Personally, I thought this test was miles better than our May test at BCHP. I was asking for bend, Dino was in front of my leg, our canter departs happened when I wanted them to, and he was mostly round. The free walk again was not up to our potential (grr!!!) but in the Intro C test it doesn't carry a coefficient, so it didn't hurt us too badly.

Unfortunately the collective marks for "Submission" DO carry a x2 coefficient in this test, and with an uninspiring score of 5 on that one, we ended up with a 39.5 despite mostly 6's and 7's on the rest of the movements. To be honest, I was disappointed in that score after feeling like we had improved since the last test. We did improve our halt scores though, with a 6 on the first halt and a 7 on the last! The judge commented that she would like to see the rider allow the pony to stretch more into the bridle, and that I had too much hand movement. Both things are true! She also wrote that we had "much potential" which made me smile!

While we didn't get ANY comments about needing more bend, the judge did remark several times that Dino was stiff in his back and neck, and needed more stretch into the bridle. I've only just really started feeling that stretchy "cycle of energy" feeling with any consistency at home, so I know it's in there, I just need to figure out how to harness it. Probably by doing less with my hands.

After a 2 hour break and another walk of the XC course, it was time to suit up for stadium.

Now, correct me if I'm wrong, but when the specs of an event say that a division is 2'3", I would expect the fences to be set at near that height, maybe around 2' if it is a "soft" course.

I was not expecting barely-18" verticals and a crossrail on my stadium course.

I went back and forth on even posting the video because it was honestly EMBARRASSING to be competing over a course that tiny.

But since I knew that we were clearly not going to have any penalties over these sorry excuses for jumps, I decided to just go for time and try to make some fun tight turns. Dino was having SO MUCH FUN and launched into the stadium ring with great enthusiasm! We essentially just galloped around the tiny speed bumps making inside turns everywhere and throwing lead changes all over the place. It was silly, but it was fun, and my pony was super game. A nice change from having to coax him over the first two fences from a trot!

We went right on to cross country after that, and while we were waiting our turn Dino kept trying to sneakily drift over to the start box. It was so funny!


I have to say that this XC run was the best I've ever had. Dino exploded out of the start box, and while he did take a good hard look at the first fence, I stayed present and rode him over! A lot of horses were having stops there; it was tough for them to see the landing side since the terrain dropped down a bit and the more inexperienced riders were having a hard time encouraging their horses over it.

After Fence 1, Dino was ON FIRE. Holy crap, guys. My pony has never gone so fast on XC as he did that day! He was sighting in to every jump, blasting over them, and then GALLOPING off the backside like a real event horse. I remembered to sink down in the tack a few strides out, which really helped Dino make a good effort over each jump. The word "sink" instead of "sit" made a big difference for me in settling into the saddle vs. getting behind the motion and driving hard with my seat.

Fence 4 was not a jump at all, but a giant 10' tall super-steep mound that we had to ride over. The upper levels had jumps before and after it, but us weenies just had to get from one side to the other. Galloping up to it, Dino kept sighting in to the Training fence in front of the mound, which was awesome but slightly terrifying! He galloped up the front of the mound, and was totally ready to gallop down the other side and jump the training brush at the bottom too, but weenie me said we were WALKING down that crazy thing! Dino was very polite about it and walked down, and then we blasted off again towards Fence 5, which involved a lot of me saying "WHOA! WHOA!" since homeboy had decided that Mach 10 was going to be our speed for the rest of the course.

Fence 6 was the water crossing, and thankfully whoever set the flags was very merciful and you could technically get through it with no penalties and not actually have to set foot in the water. Dino was giving the water the hairy eyeball BIG TIME, so we opted to skirt around the edge instead of risk penalties. The water is set in a shady wooded spot that you rode downhill to after coming out of an open, sunny field, and the water was dyed a sketchy shade of teal. Dino was not a fan and thought that there were probably hippos in there.

So we tippy-toed around the edge and then FLEW to Fence 7, a cute little brush box, and then galloped like the wind up a steep hill to the coop at 8. Dino was a maniac in the absolute best way! Another long gallop to the 'big' log at 9, which involved quite a lot of half-halting and "WHOA"-ing on my part to get him to not launch it from a mile away. Fence 10 was another nice little log and then we flew over the last jump - our first bench!

At that point, I didn't even care if we got a ribbon or not that day. My pony was so incredible, so phenomenal, and I had just had SO MUCH FUN out on XC! That run was totally worth the stupid stadium round. It was worth the whole day to come through the finish flags smiling so hard it hurt, riding the world's most badass event pony.

Our 4th place finish on our dressage score was just the icing on the cake! 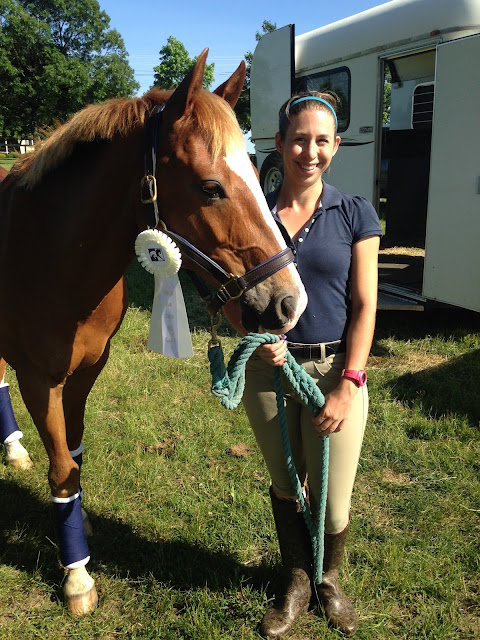