Conditioning and Trail Rides and Jumping, Oh My! 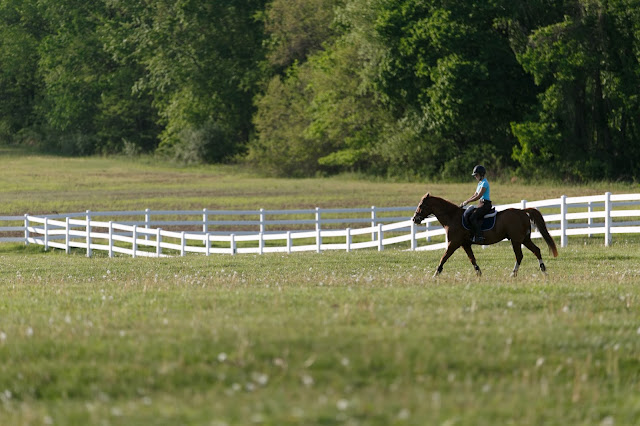 Dino and I had a GREAT weekend of riding, and it's been really tough to have to get back to work this week instead of hanging out at the barn!

On Friday I had a conditioning ride on my schedule. I really want to finish cross country feeling stronger (i.e. not about to collapse) than I did last month, as well as feel that my pony has more than enough gas in the tank to tackle the course and finish strong. Naturally, I forgot my watch on conditioning day, so I just did some loops around our big back field and sort of estimated how long each loop took to ride. We started out with two trot loops - one in each direction - and then did three canter loops on each lead. The field is pretty darn big so I figured that each loop probably takes about 1 minute to ride.

Dino was awesome! He felt strong and confident the entire time, never broke to the trot, and took the speed up a gear each time I asked. I am really starting to get the hang of letting him take care of the balance when cantering downhill, and tried hard to keep my elbows soft and following. It was really easy to see how a soft elbow allowed and encouraged Dino to go forward when we were galloping.

Saturday was trail ride day! My barn owner and I took the boys to Tyler State Park in the afternoon, and we had a BLAST! The weather was so perfect - hot and sunny with a light breeze blowing, and the shady wooded trails were absolutely gorgeous. The park is humungous at over 1,700 acres and has all kinds of different terrain to ride on, from steep mountain trails to wooded lanes to open fields to creekside trails. There aren't any pictures from our amazing ride because I was too busy having the time of my life to take photos!

Dino was totally amazing. He absolutely earned the title WonderPony that day and I am SO PROUD of how he handled all of the new situations we encountered. He led the way through a covered bridge early on in the ride, being a brave leader for Sully who was not too thrilled about it. Then he went in the river - rushing water, rocks, and all. There were also snakes in there. He did not care. HE WAS AMAZING!!! Not to mention all of the crazy terrain up and down steep hills, roots and rocks, changing footing, blind curves, random logs to jump, and other park goers with bicycles, scooters, dogs, strollers, and every other 'scary' thing you can think of. At one point we passed by the boat launch area and my rockstar pony just had to stop and take it all in - it was the most fascinating thing he'd ever seen!

I also rode him on the buckle literally the entire time, whether we were galloping through woods and fields or just strolling along. He was so chill, and so happy. I had so much fun and I CAN'T WAIT to do it again! Galloping through the woods with your best buddy on a beautiful day is what this life is all about.

Dino and I topped off our weekend of awesome rides with a jump school early on Sunday morning. My super-awesome pony was a little miffed to be stuck inside the confines of a fenced area after running free, and he definitely had on his pony'tude pants that day. He met my requests to go forward with a whole lot of attitude and angry faces, and I was quite embarrassed to have him acting up in front of my new barn mate the very first time she saw us go! After several arguments, I finally got Dino going, and he was great for the rest of the session.

Our new barn buddy is also an experienced event rider, and she set up some killer jumping exercises for all of us to work on.

The first one was recently posted by Lainey Ashker on Instagram, (video here)and it consists of several poles or small bounce fences set on a curve.

It is STUPID HARD. You watch a rider and horse go through this exercise that really know how to ride it, and it looks so simple. Keeping the bend through some poles, how hard can it be? Hard enough to make you feel like you CANNOT RIDE. We nailed it going to the left, but going to the right was also going downhill, and I kept losing the bend by the last pole. Very frustrating!

Exercise number 2 consisted of 3 fences set on an "S" curve. There was a very sharply angled turn between them, and the distances were set at 2 strides. Again, our new friend and her lovely Training level horse made it look so, so easy.


Meanwhile, EuroPony and I completely blew past the second fence about four times before I figured out that we had to jump the first one on an angle in order to get to the second one within two strides. A few times Dino took over and launched from the long spot, leaving me behind and totally blowing the turn.

After many, many determined tries, I finally figured out the "key" to riding this exercise! I compressed Dino's canter before the fence and sat (lightly!) to the base, riding the turns in a compact 3 strides instead of 2, and with that more controlled ride we met each jump perfectly. My little sports-car proved that sometimes smaller is better! When I let him really roll on forward for the 2 strides, the finesse just wasn't there to be able to make balanced turns. What does this teach us about the proper canter for the job!?

We ended the ride with a few jumps through the 1-stride line, which was pretty flawless if I do say so myself. I worked too on keeping Dino STRAIGHT on landing and not letting him zoom off like a motorcycle to the inside. Steering FTW.

Homeboy has today off after such a momentous weekend of riding, and hopefully tomorrow we will be able to squeeze in a cross country school between raindrops!