In my never-ending quest to find toys for Max that both keep his attention and do not find their demise within 20 minutes in his Jaws of Destruction, I picked up an old standby, a natural knotted rawhide bone. I got it in a "big dog" size to keep him from destroying it too quickly.

To put it mildly, he thinks it's the greatest thing in the universe. 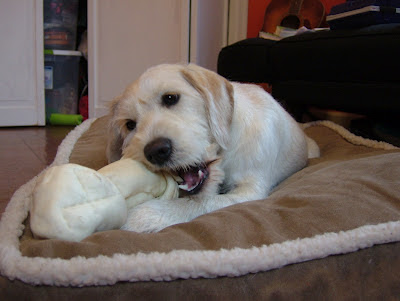 He did not get up to say hello to Michael when he came home... because he was chewing his rawhide. 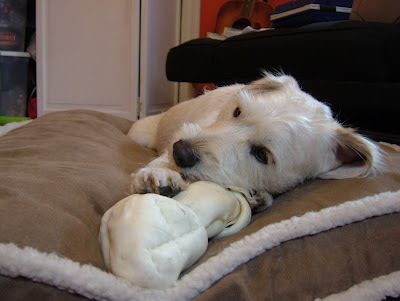 He did not want to go outside to pee... because he was chewing his rawhide. 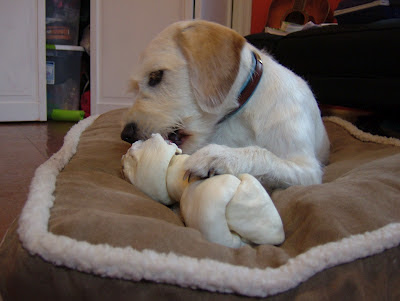 He cried until 1:30 IN THE MORNING... because I ruled that it was time for bed and he could not chew his rawhide. 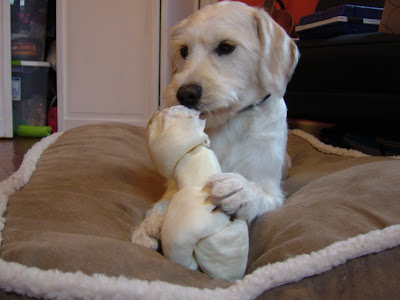 And this morning, after ripping off a sizable chip, he did not set in to gnaw on the smaller piece. Oh, no. Max spent almost an hour carrying it around the house looking for a safe spot in which to "bury" his treasure. The rawhide chip was hidden behind the futon, next to the radiator, underneath the power cord of a lamp, next to the desk, under the living room table, in the hall closet, and next to some boots. Max must make sure his precious, precious rawhide is safe from anyone who might steal it.