Up: A Lesson Recap 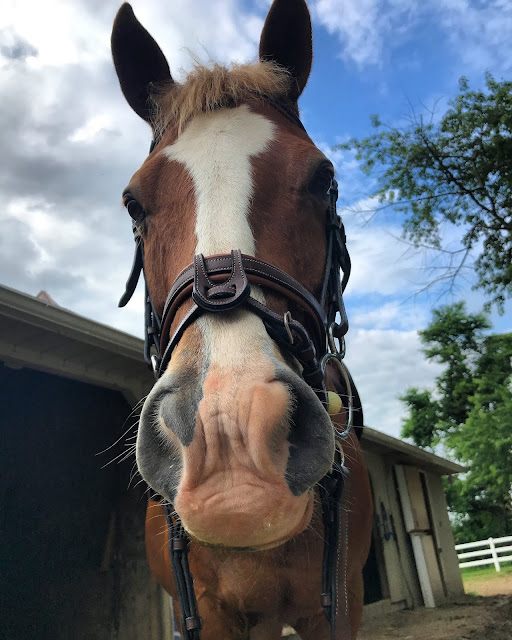 Last weekend found Dino and I finally back at our trainer's barn for a lesson! It was good to get some input and direction injected into my riding life again. Thankfully,  the weather has been steadily improving so we were able to get out of the uneven, dusty indoor and ride in the huge outdoor arena. Though if you ask Dino, the ring still isn't big enough and the mere existence of the fence was seriously cramping his style.

I started off the lesson "warming up" at the walk on a floppy rein with my hands pretty much totally open while I chatted away with my trainer.

This... is not very productive. It gives Dino the idea that we're just going for a happy hack and he doesn't have to actually a. be in front of my leg or b. accept contact. He would go on to feel pretty sticky and sluggish for most of the ride. His rider needs to get with the program and insist that his existence inside an arena means IMMEDIATE FORWARD MOTION!

Once I was done lazily wandering around the ring, we started working on a big circle over two raised cavalletti set about 9' apart, first at the walk and then at the trot, all on a longer hunter-length rein. The idea was to let the exercise do the work for Dino, asking him to think and pick up his little legs, while I just focused on keeping him in front of the leg and making a circle that was mostly round.

Shockingly, when I insisted on forward and, like, steered, we met the poles very nicely and Dino floated on through. When I did not, he had to reach to get over them and everything was difficult and awkward.

Carrying my hands UP and IN FRONT OF ME also made a HUGE difference in Dino's way of going throughout this lesson; something that I've been noticing a lot in our rides at home. If I dropped my hands and opened my elbows, the connection suffered a lot and my pony was much less willing to go forward. But when I focused on carrying my hands up and keeping an elastic 'bounce' forward in my elbows, Dino happily reached out to the bit and motored on through the exercise. Once we stopped flailing through the cavalletti at the trot, we cruised twice around the huge ring in canter before starting to jump.

The first jumping exercise was very simple: trot over one crossrail, canter away, make a nice transition back to trot and trot another crossrail in a figure-8 pattern. This went well until Dino very slowly NOPED out of jumping the second fence.

He refused. A crossrail. 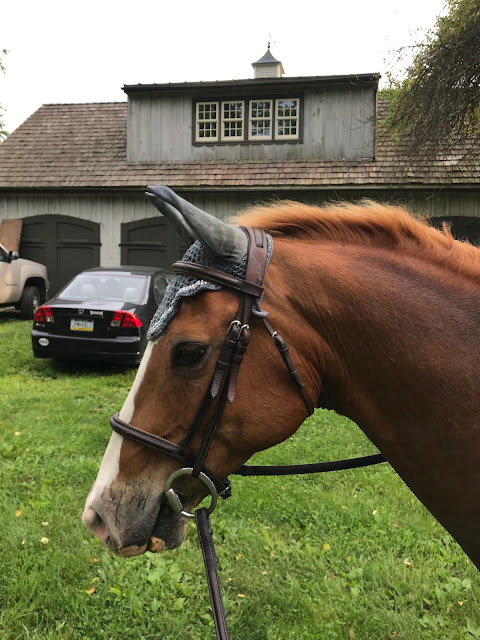 After much pony-beating I got him over the godforsaken thing, and we were able to move on with our lives and continue jumping around several different manifestations of the crossrail figure-8, adding in the two cavalletti at the end of the ring as well as a small vertical as it struck my trainer's fancy.

When I rode well - keeping my hands up and in front of me, holding my upper body up away from Dino's neck instead of collapsing forward, keeping my leg on so he actually cantered the bits he was supposed to canter, and making wide, sweeping turns instead of spinning him around on a dime, things went beautifully. Dino's canter became more balanced the more I balanced myself (shocker!), we saw all the same distances, the turns were more fluid, and the little courses just flowed.

If I let myself collapse, dropped my hands down, didn't plan my turns, or got tired and lazy about keeping Dino motoring forward, everything was a hot mess.

For me, the biggest difference-maker in this lesson was keeping my upper body and hands UP. When I collapsed forward, Dino did too, and I felt that scary runaway-shopping-cart feeling of him just careening around on his forehand at the fences. I know this is mostly a strength and fitness issue on my part to correct, but it was good to have it identified in the lesson so I wasn't left wondering why jumping felt uncomfortable and a little unnerving.

Our homework is to build lots more of these physically simple but mentally challenging exercises at home to continue working on our combined strength, fitness, and finesse. We'll see what I can come up with!