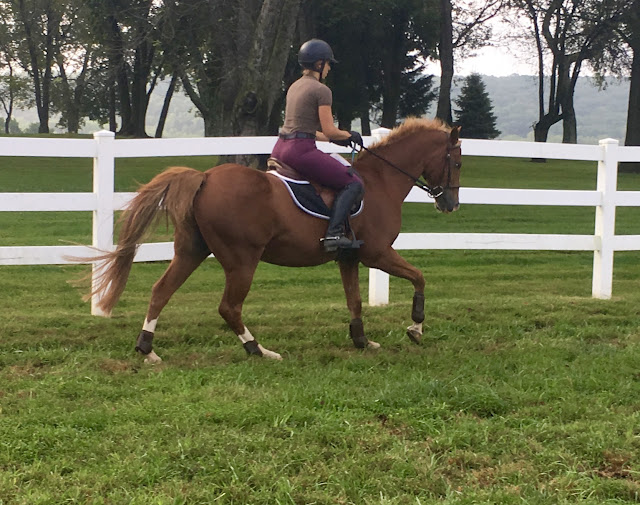 The good thing about having lessons at 7:30 in the morning before work is that we get to enjoy lovely cooler temperatures, ponies fresh from a good night's rest, and starting the workday in a great mood.

The bad thing about having lessons at 7:30 in the morning before work is that the grass is really wet and slippery because it hasn't had a chance to dry out after the previous day's rain.

After our last lesson on wet grass, Dino seemed to have learned to be a little more attentive and that I'd keep him from falling on his face if he just paid attention. Instead of whipping around the corners on his forehand, slipping on the wet footing, and ignoring my half halts, he kept his hind end underneath him, listened to my balancing and bending aids, and was all-around just plain balanced and rideable. This tuned-in, conservative, sure-footed pony was a huge improvement over the one I had two weeks ago!

While the warm up flatwork was simple, just walk/trot/canter with some big loopy circles and changes of direction, Dino was on point the entire time. He was consistently pushing well from his hind end and felt delightfully soft over his back as he reached into the bridle. And in the moments that he ducked behind the bridle and my leg a little bit, I just squeezed him back up and that was that. My trainer caught this neat series of photos that show how that worked at the trot:


I've been trying to be REALLY disciplined about not going right to my seat in moments like this, and it's exciting to see that I'm getting better at it! Shockingly, the canter work was even better than the trot in this lesson. Dino stepped right up into it and stayed light, round, and on - but not behind - the bit. My trainer said it was probably the best quality canter she'd ever seen from him! I was tickled.

And the best part was that even on the very slick, uneven, soaking wet grass, Dino was so balanced and listening so well that even without studs, he didn't slip once. I was thrilled!

We did opt to keep the jumping super simple because of the slick grass, starting by riding a big figure-8 over two cavaletti. The focus was on taking my time, waiting for the close distance, and keeping my leg on. I had a little trouble getting Dino up in front of my leg to begin the exercise (he's still not the best at taking breaks!) but I really liked the slow pace of this pattern and how it allowed me to really balance and school the trot on the loops between the straightaways before picking up the canter and heading towards each jump. It was also good practice for Dino to transition back and forth between trot and canter.

The lesson ended with a nice little course: the cavaletti figure-8, wide sweeping right turn around the short side of the ring to a small crossrail, then down the centerline over a small 2' grid comprised of a vertical, one stride to an oxer, one stride to another oxer.

Our first go through the course started out very sticky; Dino didn't want to go back to work after a break, and I couldn't get him in front of my leg for the first cavaletti. He went over, but it wasn't pretty! Thankfully Dino happily moved forward throughout the rest of the course, and really tried hard to keep cantering around the tight, slippery turns. He jumped the grid flawlessly, and I was pretty darn pleased with him! We finished the lesson by jumping the entire course one more time, and I fixed the behind-the-leg-to-the-first-fence problem for a picture-perfect course. He took me right through the grid, and was generally a total rockstar of a jumping pony.

I was SO pleased with how Dino and I tackled the small-but-thoughtful exercise, and left the barn feeling totally ready to dominate Fair Hill this weekend. Dino was there for me and working with me, and there are few feelings more confidence-inspiring than that! And as of the publishing of this post.. we're headed to Maryland right now! Wish us luck!