It feels GREAT to be back in weekly lessons again! This week the name of the game was gridwork, and we accomplished a lot! 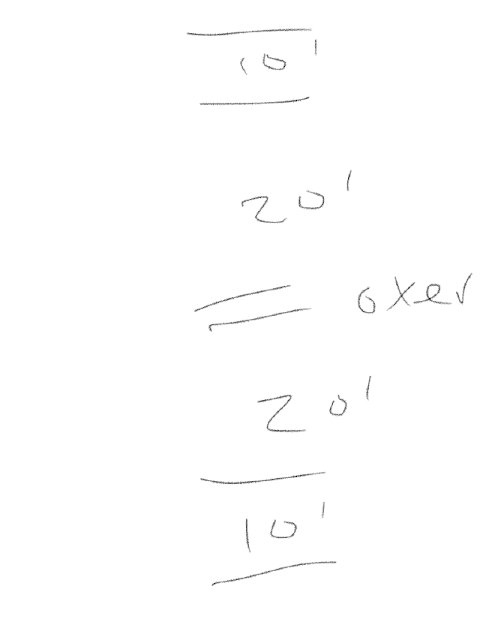 While Dino had gone amazingly the day before in our flatwork ride, he wasn't a huge fan of going to work in a jumping lesson first thing in the morning. He was pretty stuck behind my leg during the warm up, so we had to gallop around like lunatics to get the Go Button working again. Thankfully it seemed to do the trick, though I did fall into the trap of letting Dino get on the forehand and behind the leg during a change of direction, and got a good reminder to keep him UP and half halt before downward transitions!

We got right into the meat of the grid straight away, and spent pretty much zero time on flatwork once Dino was going forward. Everything started as poles on the ground except for the fences in the first bounce, which my trainer put up on just one side.

Dino blasted right through the exercise, and it was great to have him moving off my leg so well, but he was also just running over the poles and over-shooting the distances. At the end of each run through the grid we halted at the end of the arena and came back around in the other direction. Slowly, the fences went up bit by bit until we achieved the grid's full height - 2' verticals in the bounces and about a 2'6" oxer in the middle.

Once the jumps started growing taller, Dino started objecting a bit. He actually had to use his butt, and that was hard! I got a few bucks on approach to the grid, but always sorted him out and got him going again by the time we got to the first fence. I just had to focus on not micro-managing the first jump - when I really gunned for a distance or got my body ahead of Dino's center, the grid was a lot sloppier and less rhythmic than when I just kept my leg on, sat quietly, and waited for a closer take-off.

We just kept coming through the grid until I was able to keep my leg on and wait and Dino was able to jump strongly through the entire exercise at its full height. It was really wonderful, thoughtful practice for me to manufacture a good jumping canter, and then just support it without over-riding or leaning at the fences, and the exercise REALLY helped Dino rock back on his hind end and jump fantastically well from that balanced canter. We finished with a bit of a course: jump through the grid, turn right and ride alllll the way around the field to the hogsback, turn left, and jump through the grid again. The hogsback was on a LONG approach, so it would really test my ability to maintain the good canter that the grid had created.

The first time through we nailed the grid, and then had an iffy jump over the hogsback. I was trying really hard to just wait for the fence to come to me instead of gunning it for a longer spot, and I should've added a little more leg and energy in the approach. But Dino and I were both rapidly losing steam, and as we approached the grid off the left lead he sputtered out, I couldn't get him going again, and he made an impressive sliding stop in front of the first bounce.

I got scrappy and put on my Mean Trainer Pants and made Dino do transitions until he was practically leaping forward off my leg and seat before coming back to the grid. With my pony actually in front of my leg, we nailed it! Miss Trainer, of course, wasn't 100% thrilled with that and asked me to ride the whole course again, with the grid lowered a bit to let Dino know that when he does hard things well he WILL get a break, and it went really smoothly except for the hogsback, which I again should have ridden just a wee bit more strongly since Dino wasn't taking any initiatives to carry us over at that point in the lesson. We drifted allll the way to the left and chipped it badly, and it was very nearly a stop. I couldn't end the lesson with that crummy jump, so after establishing a good canter I approached the hogsback again and rode more actively this time, thinking about riding Dino's energy UP instead of just OUT, and we had a picture-perfect jump!

I was really, really happy with how both Dino and I performed over the course of this lesson, and how the exercise pinpointed areas that we both needed to work on. He was jumping GREAT once he slowed down and sat down on his haunches, and it tested my ability to ride in a strong and balanced position with a supportive but not over-active seat and leg. But I have to say, I'm most excited about the fact that I got scrappy and mad after Dino stopped at the grid instead of shutting down, AND was able to hold my position through the grid throughout the ENTIRE LESSON. Our last gridwork lesson left me flopping all over the place like a rag doll, and I was absolutely thrilled with how much stronger I felt during this lesson! Trainer even commented that my position was looking so much stronger, and I'm very, very pleased with that.

After just two lessons back with my coach I'm feeling on top of the world again over fences, and definitely feeling a lot more ready for our HT next week!
Email Post
Labels: jumping lessons