Sometimes I make really good choices about our competition schedule and carefully plan our horse trials to allow for the best possible performance by myself and my pony.

Other times I schedule two HT's on back to back weekends, the second one being on a Friday afternoon in an unseasonable heatwave, while being nearly-overwhelmed by work and personal goings-on, and also sign up to run a 5K the morning after that.

This is the story of that second scenario.

I really, reeeeeally wanted to finish up our qualification for the horse park's Friday Evening Eventing year-end-award series this month and then ease into the fall with a less frantic show schedule than we've been keeping so far this season. (7 horse trials, one schooling jumper/fun show, and one western show, if you're keeping track at home!) We've done a LOT this year and man has it been SO MUCH FUN, but I am more than ready to let off the throttle a bit. So I entered hoping that I could wrap up the points I needed and take it easy for the rest of the fall. 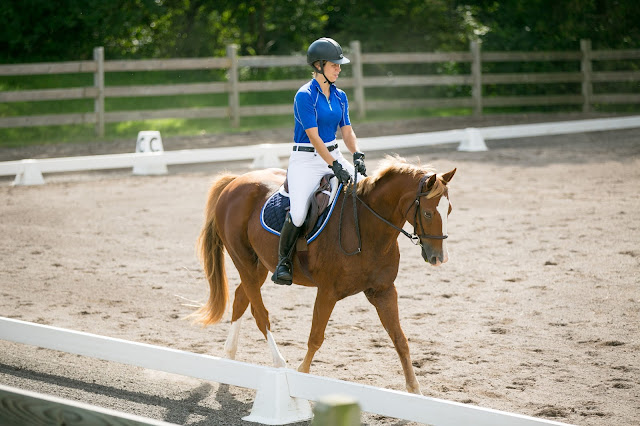 Because climate change is a thing now, our lovely and seasonable end-of-summer-early-fall weather had made a hasty exit and we went back in time to July, when temperatures were in the 80's with plenty of humidity. For a pony who'd already begun to grow a thicker, plushy coat, it was a recipe for a stressful show.

Dino warmed up for dressage feeling uninspired and behind the leg. I got him working okay, and he was obedient, but he really wasn't keen on volunteering to push up into the bridle and really work over his back. He was hot, sweaty, and maybe not super enthralled about showing again just six days after Fair Hill. 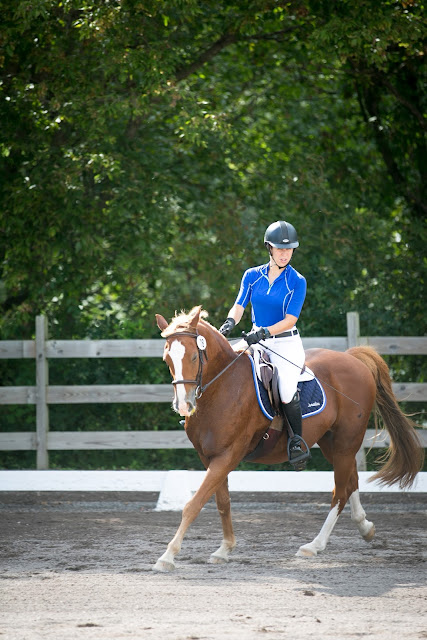 Our test lacked energy and impulsion on his part, and as a result I rode way too aggressively, pretty much holding my pony together with my legs throughout the entire thing. Thankfully the judge LOVED him, and had some really nice feedback to go along with a rather respectable score of 33.6. She encouraged me to let Dino take some responsibility for the impulsion and to stop working so hard to carry him through the test. Noted! Despite feeling like it was far from our best, I was happy with Dino for being so obedient even though he wasn't feeling tip-top in the heat, and especially with the 7.5 we scored for our free walk. 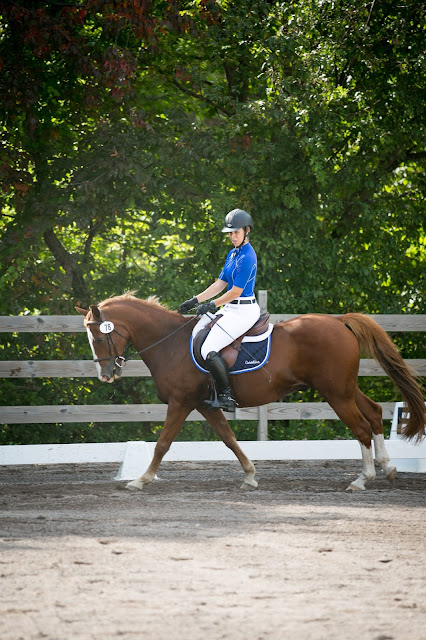 A quick wardrobe change before stadium and we found ourselves back in the warm-up ring, which was blessedly a lot less crowded than the last Friday Evening show we attended. Again, Dino started off a little bit behind the leg, but after some hand-gallops down the long sides of the arena and a few jumps over each warm-up fence, he was feeling a bit perkier. I didn't want to overdo it in the heat, so kept to my standard each-fence-once-on-each-lead jumping warm up even though Dino felt like he could use a little more enthusiasm for his job. It was the right choice - after just six jumping efforts Dino was definitely feeling the heat more than usual, so I parked him in the shade until it was our turn to go in the ring.

We had an okay stadium round. No penalties, but Dino wasn't motoring forward like he usually does in the show jumping and pulling me to the fences, and instead of our usual quick, sharp lead changes we had some sloppy turns through the trot. Nevertheless, we were going to move into cross country with no jumping faults. 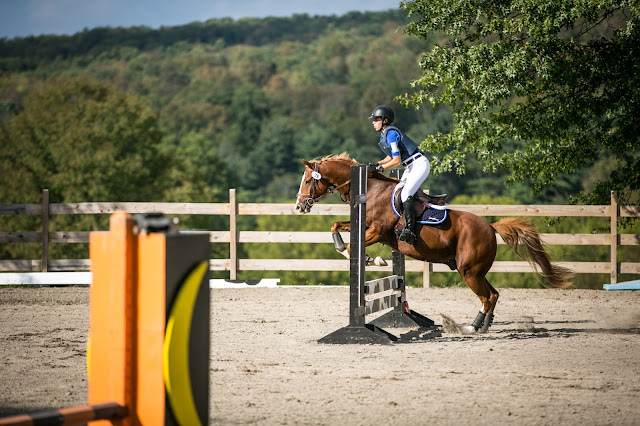 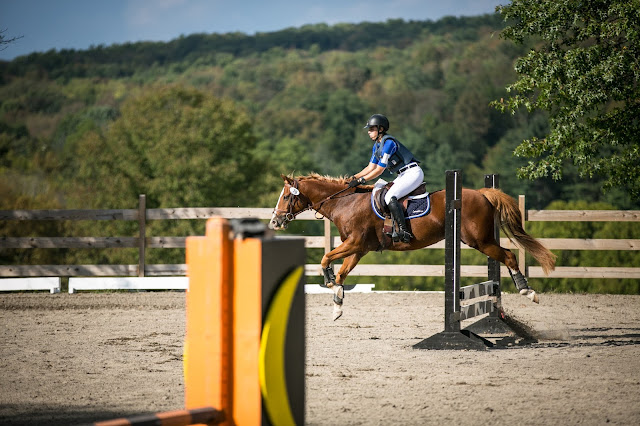 As we left the ring and I took a minute to catch my breath, I saw that Dino was having trouble catching his. He was very hot and not recovering as lightning-fast as he usually does. Thankfully Mike was at the show with me and he ran to get a bucket of cold water to sponge Dino off with right away. I stood him in the shade as Mike doused his neck, chest, and flanks with water, and saw with great relief that Dino's respiration was returning to normal as he cooled down. It was, honestly, a little scary! I let him mosey as slowly as he wanted to the start box, keeping to the shady tree-lined path as much as possible.

Because my pony was clearly not feeling up to par in the heat, I planned to take it super easy on xc, letting him trot if he felt like he needed to and not worrying about making it our best run ever.

Thankfully, once we got out to the warm-up area by the start box Dino had recovered fully and absolutely dragged me over the little crossrail, galloping away merrily. My event pony was back!

The course began on the air strip with three logs set nice and far apart, which I was pleased with. This would let us get rolling and get into a rhythm before there were any difficult turns or terrain to deal with, and I could see what kind of pony I had under me.

Dino jumped the first three logs without hesitation, but it became blatantly clear to me that even though he was enjoying this part of the day more than he did stadium or dressage, he was struggling a bit. I just couldn't get his motor running fast or powerfully enough, and what should have been easy gallop fences jumped out of stride rode a lot more awkwardly, with Dino uncharacteristically chipping in to every one. I tried my best to get his hind end under him for Fence 4, a post-and-rail jump, and ride him more actively to the base, but my EuroPony just didn't have the steam to do what I was asking, and instead of re-directing his energy into a bouncy, upward canter, he petered out to a stop. He still got a quick spank for that one, but jumped the fence without drama upon re-approach, and continued on to a small downhill vertical set in a split-rail fence. 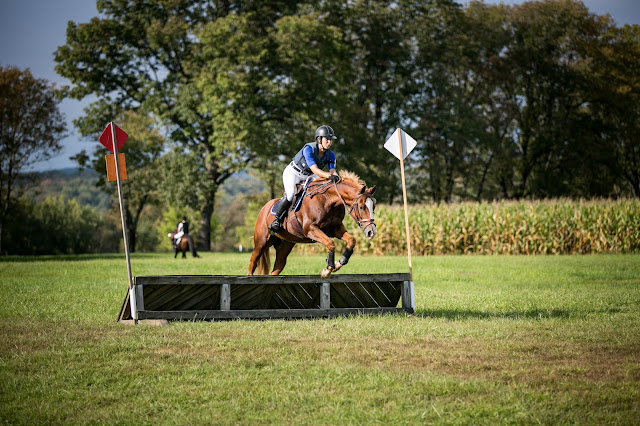 After that, the course moved into a shady wooded area and Dino seemed to wake up and get his act together. He took me boldly down the steep hill and around the sharp right turn to the hanging log, and then charged away, weaving between the trees to one of the biggest fences on course; a near-BN-sized ramp. Up and over! He negotiated a tricky blind 90-degree turn to the other big fence on course, a solid table that was a new jump for this venue at the Elementary level, like an absolute professional.  I thought Dino might back off the fence a bit, so I made sure to support him with my leg, but he jumped neatly over without issue. The table had claimed quite a few victims that day, so I was pretty excited with how Dino tackled it. Good pony!

Then it was through a narrow tunnel in the trees over a small log, and we blasted uphill and through the treeline to the last three fences on course: a small coop, a row of upright logs, and a brush box. Dino jumped them all like a total champ, and I leapt off of him as soon as we crossed the finish flags. I loosened his girth and made our way towards Mike, who was waiting with another bucket of cold water to help my buddy cool off. With that pesky 20 penalties we finished in 7th place, JUST out of the ribbons and far from the end score of 33 that I'd hoped for. We may still have one more show to go to this season after all. 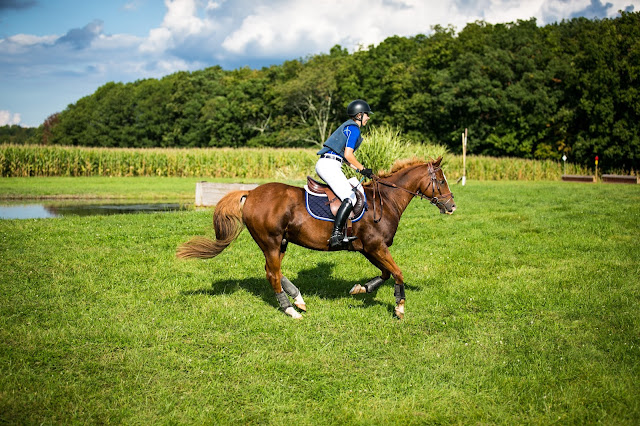 But considering the conditions of the day, I have to say I'm pretty darn happy with my pony. Dino was hot, tired, and not having a very good go of it in the heat at this show. He could have said "No" a lot more emphatically than he did, and considering the fact that the weather made things tough for him, he was incredibly generous to me. I'll forgive him for the XC penalties, and get him body clipped ASAP!
Email Post
Labels: cross country dressage eventing horse trial stadium jumping