And now for the fun part... cross country!

Who am I that I just called XC "fun"? I don't even know myself anymore. In any case...

After our less-than-perfect stadium round, I was feeling a little nervous about heading into our most challenging phase with a stop already on our record and on my mind. With Megan and Emma at my side to remind me to get angry and ride hard, I popped Dino over the XC warm-up fences while we waited our turn to head into the start box.

He felt good. He was taking me over the little log pile jump with no issues, and letting me place him right at the base of the jump instead of flying along on his forehand and supermanning it from a gappy distance.

With 45 seconds until go time, I tuned him up to my leg at the walk with a solid slap of my jump bat as we meandered around the start box. I was NOT going to mess around.

We blasted out of the start box and I gathered up my pony between my leg and hand for a solid jump over the first log. So far so good! 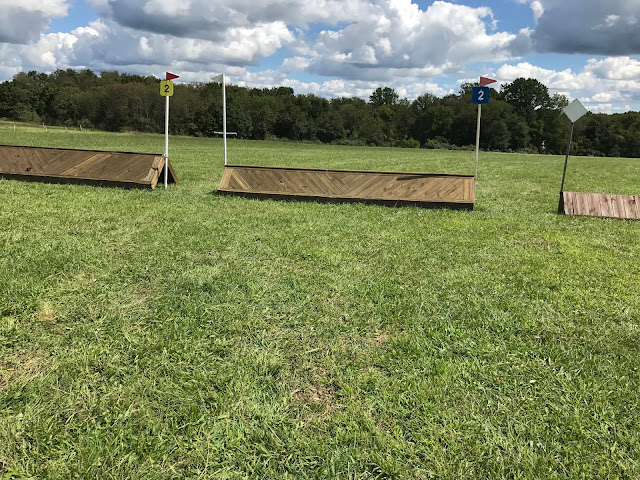 Dino and I made quick work of the coop at Fence 2, and we were already on our way to the biggest jump on course: the Red Table of Doom was the third fence, and I was actually feeling FINE about it. Set the way it was, it looked a heck of a lot smaller than it did last time, and we were up and over with absolutely zero difficulty.

After that, we were cruisin'!

My main focus during this course was not to let Dino get into Runaway Shopping Cart Mode. Above all, I wanted him to be balanced and solidly between my leg and hand before each fence, and I'm very happy to say that we achieved that goal! 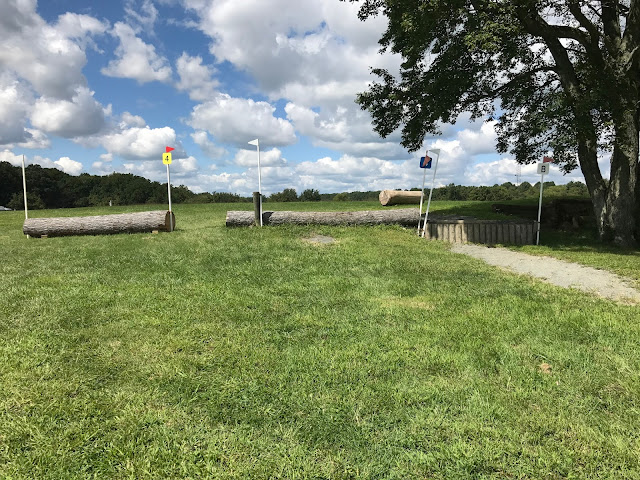 After picking up speed on the way to this nice little uphill log, I had to bring Dino back with some very strong half halts on the way to Fence 5. He protested by flipping his head in the air, but he sat on his butt and slowed down without losing impulsion, and I was more than happy with that response! 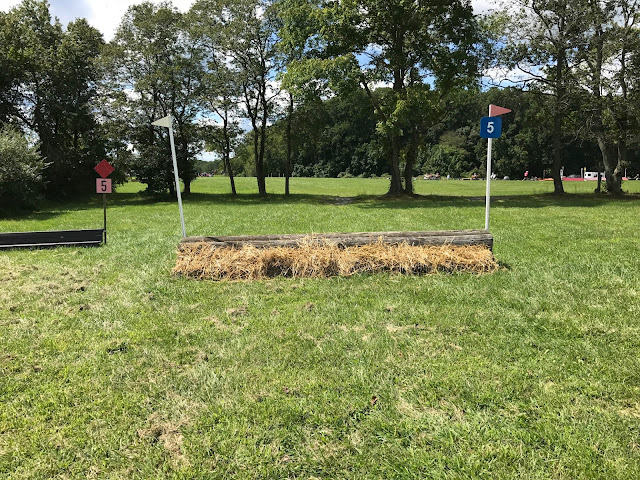 Fence 6 was probably one of the smallest on course, a wee little ramp, but there was a LOT going on around it. Between the shaded tree line, a cluster of vehicles and jump judges, and a view of the entrance to the path through the woods, there was a lot for the horses to look at. Dino peeked a bit at this fence, but with just a little encouragement he hopped on over. 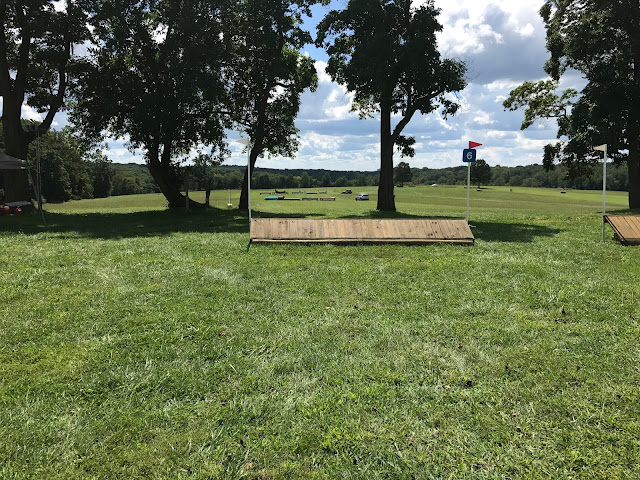 Down the hill we went (complete with lots of firm half-halts to get the pony off his forehand!) towards the train. This jump is just adorable. My half-halts worked SO well indeed that we jumped this low and wide rolltop from a forward trot. 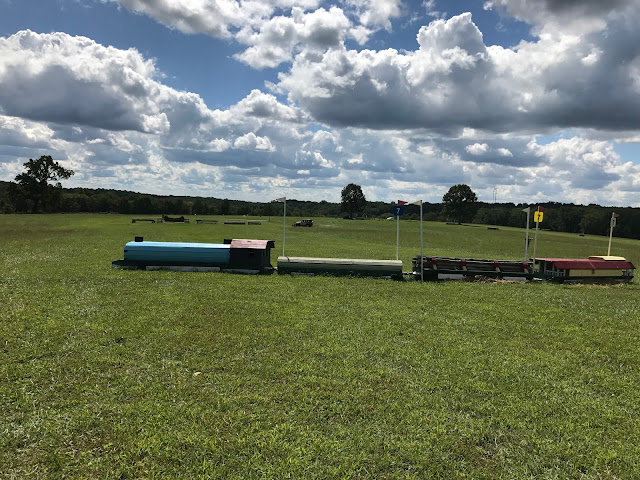 Another easy cruise to the log pile before heading to the entrance to the water. The course was spread-out with lots of easy gallopy fences, and Dino just ate it up. He's so much more confident when he has time to think and recover between XC fences, and I just love how he runs at Fair Hill! 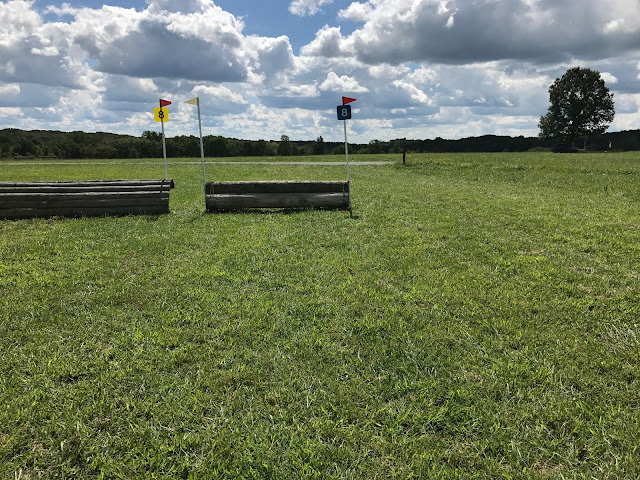 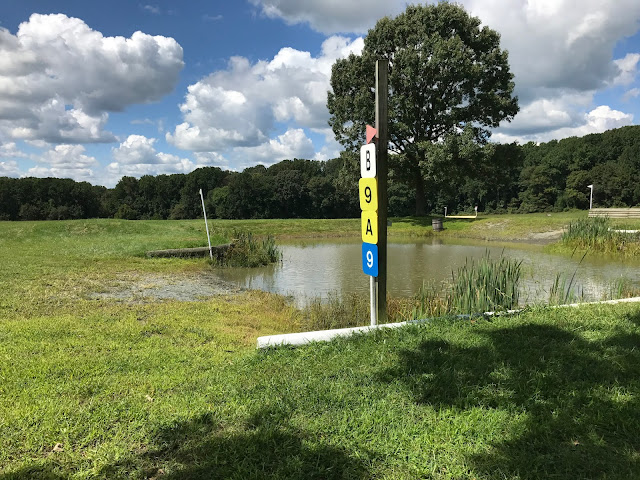 I had considered jumping the BN fence out of the water, but our slow & easy trot through the complex left me with zero impulsion to use to get over the sizeable rolltop, so we just moseyed on down the hill to the ditch. Again, my half halts were working SO WELL on the downhill approach that we trotted the last bit of the hill in front of the ditch, at which point Dino locked on and surged over! 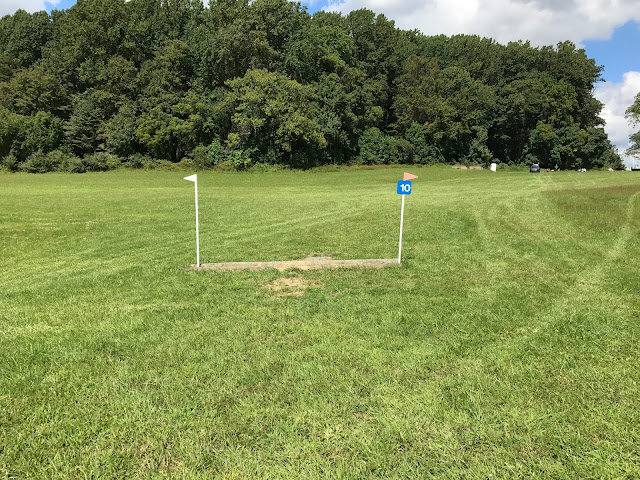 After the ditch it was a nice gallop up the hill to the black box, which was in the same spot on course as last year. It jumped great, just like last time! 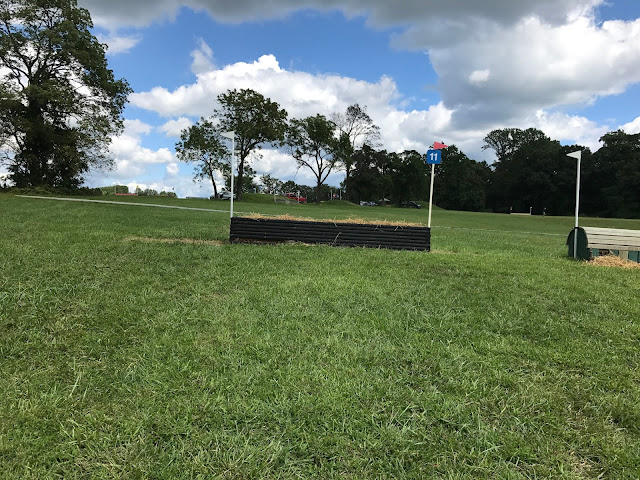 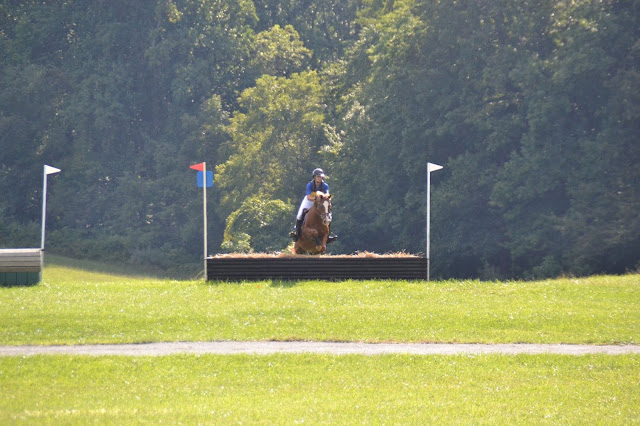 With just two more fences to go, Dino and I galloped confidently away from the box to some hay bales, which he jumped right out of stride. 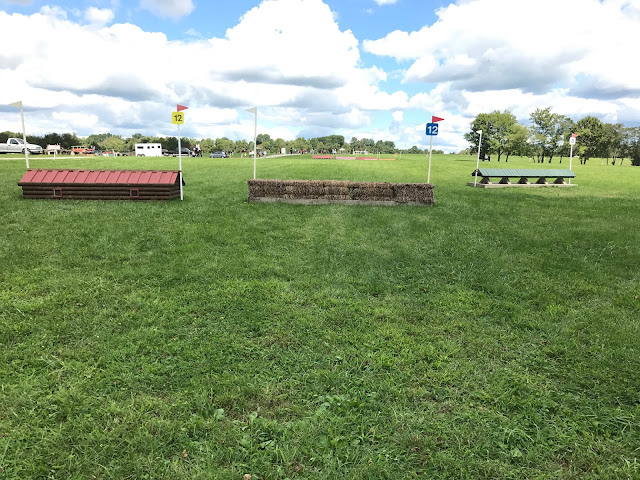 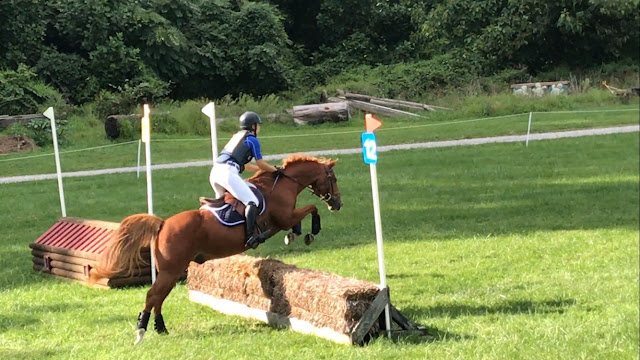 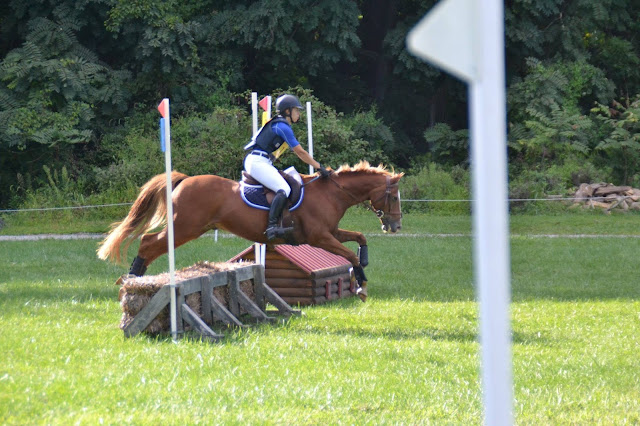 And after some Get-Off-Your-Dang-Forehand half-halts on our way to the final coop, Dino cantered politely over the last fence and through the finish flags, sealing another penalty-free XC run for Team PONY'TUDE!

While I was less than thrilled with our performance in dressage and stadium at this show, I was positively delighted with how Dino and I both stepped up to the plate on cross country. The course was shorter and less technical than it had been the last time we were at Fair Hill, and it rightly felt like a canter in the park for us. Many of the BN fences looked positively friendly, too, and I'm more than happy with how I handled my own headspace, as well as with how bold and confident Dino was throughout the course.  I think I may finally be getting a feel for the canter I need from him in front of the XC fences, which is exciting! And I'm also very pleased with how I was able to ride aggressively instead of letting memories of our refusal in stadium paralyze me - there was a time not so long ago that I would have had a psychological breakdown over that!

With just 4 faults added to our score from our show jumping round, Dino and I finished in a very respectable 6th place out of 12 competitors, adding another bit of satin to our collection. But most importantly, I had a BLAST running cross country at Fair Hill and hanging out with all of my Mid-Atlantic blogger friends! 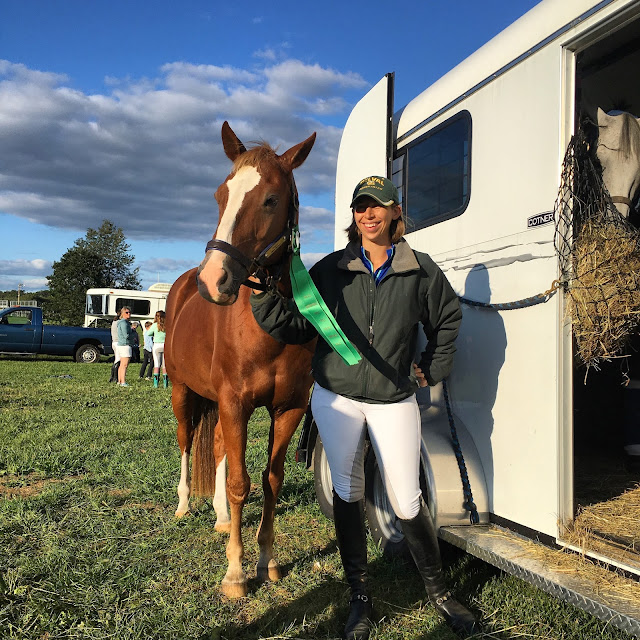