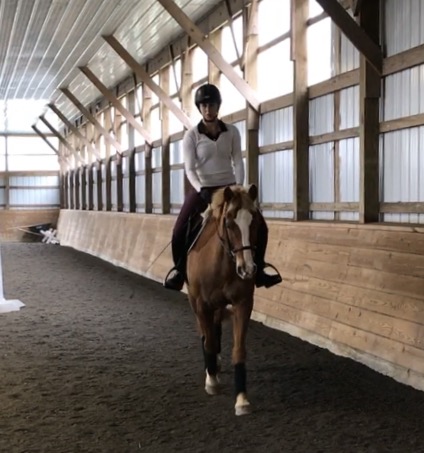 The day after the Centered Riding clinic, I was lucky enough to get a lesson scheduled with my trainer at our farm! I recapped what I had learned and worked on the day before, and she was able to blend those concepts into our lesson, which focused on getting ready to ride the dressage test at our upcoming horse trial.

Dino was not super thrilled to be back doing hard work in the jump field, and felt sticky and behind my leg throughout most of the lesson. Our warm up focused on getting the horses moving forward and pushing them out into the outside rein while making nice round 20m trot circles, but I was reluctant to really take a good feel of the bit since Dino was feeling so unmotivated, and rode on a pretty light contact the entire time.

This would come back to bite me in the ass later.

We dove right into practicing BN A, and my first attempt was an absolute hot mess.

My brain went into "AHH! A DRESSAGE TEST!" mode and any semblance of good riding went out the window. Canter departs were angry and almost non-existant, circles were not round, and there wasn't really any sort of pony going on the bit happening.

So, we took a break, I galloped Dino up the hill to try and get him a bit more forward, and we tried again.

The second attempt was marginally better. There were more reasonable canter departs, Dino was working on the bit more often than not, and the whole thing was less of a total disaster. But my trainer noted that I wasn't really using my outside rein at all, especially to the right, and it was making Dino REALLY crooked and making a decent canter and round circles nearly impossible.

As always, she was right, and I was subconsciously opening the fingers of my left hand and letting go of that outside rein, causing everything to fall apart. She suggested that I 'check in' on the outside rein once in a while to make sure there was a softness and connection there, especially before the right lead canter. I was riding like a pansy because I was afraid that Dino would shut down, and I just can't be doing that! 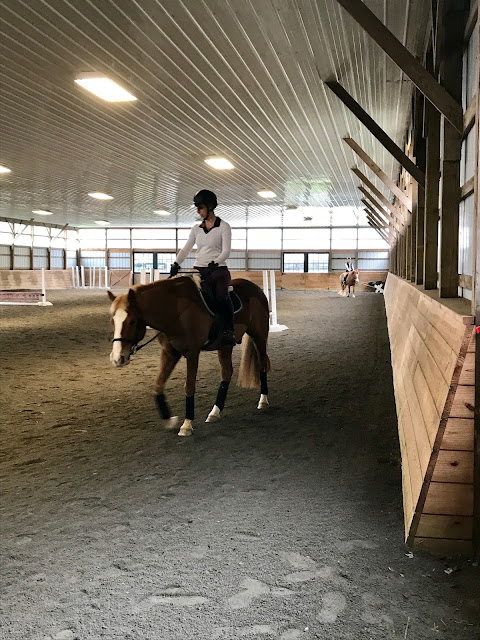 Attempt #3 was VASTLY improved. I made the effort to, ya know, use my outside rein and keep my leg on while I was doing it. Dino of course responded in kind by connecting himself back to front and  holding himself round throughout most of the test. He did also get behind the bit a little and was definitely more tense in his topline than I like him to be, but overall our last test was so much better when I stopped staring at my pony's ears and took a feel of the outside rein.

I opted to practice some more canter transitions after the test riding was done, and wouldn't you know that using my legs and holding the outside rein in my closed fingers with a heavy elbow made my pony hold himself round and pick up the canter whenever I asked. As soon as I stopped pussyfooting around and actually rode decisively instead of anticipating some sort of bad reaction or blow up from Dino, things got a million times better.

Inside leg to outside rein, y'all. It works.

As they often are, the conversations I had with my trainer during and after this lesson might have been even more valuable than the actual riding. We talked about how just getting the canter, or just getting through the test isn't really good enough anymore. We CAN do a really bang-on job and have a fabulous test, and I need to shoot for that instead of being okay with merely surviving. It's got to be a GOOD test and a GREAT canter (or trot, or free walk, or whatever) because we are more than capable of putting in a really excellent performance at this level. The same goes for the jumping phases - it's not enough to just get over everything, we can get over all the jumps WELL, and I need to believe that and ride like it's true.

I need to ride like a winner, because dang it, I AM a winner.

One other miscellaneous point that I'd like to keep in my back pocket was remembering to keep my eye level and my energy level UP. As soon as I shift my focus to Dino's ears and what he's doing (or might be thinking about doing), my ride suffers and I get sucked into his Jedi mind tricks. Just like what I learned in the clinic, 75% of my focus needs to be on myself and what my mind and body are doing, with 25% of my focus going to Dino himself. He needs to exist more in my peripheral vision than directly in my line of sight. The image of my glowing, spinning, sparkly ball floating upwards inside my body was one that helped me a lot with this, and is something I want to try and think about during the show this week.

If I can just stay relaxed and confident, can you even imagine what we can accomplish?!