One of the things I find endlessly fascinating about horses is herd dynamics. I could watch them for hours out in the field, observing the ways they interact with each other, build friendships, and determine their place in the herd. I've learned that equine relationships truly are dynamic, and that each horse's role changes depending on the situation they find themselves in, as well as on individual growth and change in the personality and self-confidence of each animal. A healthy herd is vital to a healthy, relaxed, confident horse as well, and over the years I've witnessed so many positive changes in individual animals as a result of being placed in a secure, healthy social environment.

Before I moved Dino to Orchard Hill, he didn't have healthy friendships. He was in a borderline abusive relationship with his one pasturemate, Charlie, and acted like a controlling boyfriend. He wasn't particularly NICE to Charlie, but if Dino couldn't have him, no one else could. Much of his turnout time was spent chasing the other horses away from His Charlie, and then refusing to play when Charlie wanted to gallivant around.

Now that he's in a smaller, more stable herd in a much healthier environment all around, Dino has developed a fast friendship with Sully. 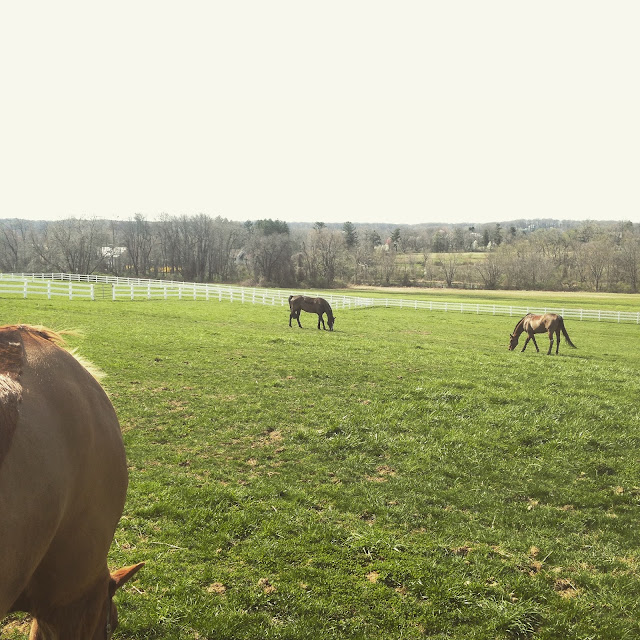 Sully is without a doubt, the most friendly and social of our three horses. Acting as a bridge between contentious parties, Sully is the nice guy who is friends with everyone, loves meeting other horses, and also often acts as the herd leader. He almost never displays aggressive or defensive behavior towards Dino and Chance, and yet they are more than happy to follow his leadership. Sully is welcome to share food with either of the other horses, and generously shares his own feed with them as well. He moves easily throughout the herd, is always treated with respect, and kindly cares for his friends. His playful nature often results in bite marks on Dino and Chance's rumps, but it's all in good fun as far as Sully is concerned. Out on the trail, the other horses defer to Sully as leader, a job which he takes very seriously. Unless, of course, we encounter something that Sully finds unnerving, in which case Dino will step in to take charge of the situation and lead the younger horses through. Sully is also extremely friendly with humans, very much wants to do a good job as a riding horse, and always wants to know what we are up to. Our kind-hearted social butterfly, Sully is the one who keeps the little herd healthy.

Dino is the quintessential grouchy old man. His personality is dominant to the point of being aggressive towards other horses, he doesn't like to share, he doesn't like other horses getting in his personal space, and he ABSOLUTELY doesn't like anyone telling him what to do. If Dino isn't in charge, or if another horse challenges his authority, things get ugly. I can just hear him saying, "GET OFF MY LAWN, YOU ROTTEN KIDS!"

However, what has been totally fascinating to observe during his past 2 years living at Orchard Hill is the way that Dino falls into line behind Sully. Before Sully came into his life, I had never seen Dino share food with any other horse, or play, or lay down in the pasture, or allow another horse even close to his personal space bubble while eating. More often than not, he would actively chase other horses away from his food or out of his space; ears flat back and mouth open. He was constantly on guard, ready to defend himself and make sure everyone knew that he was king of the hill. Sully changed all that. 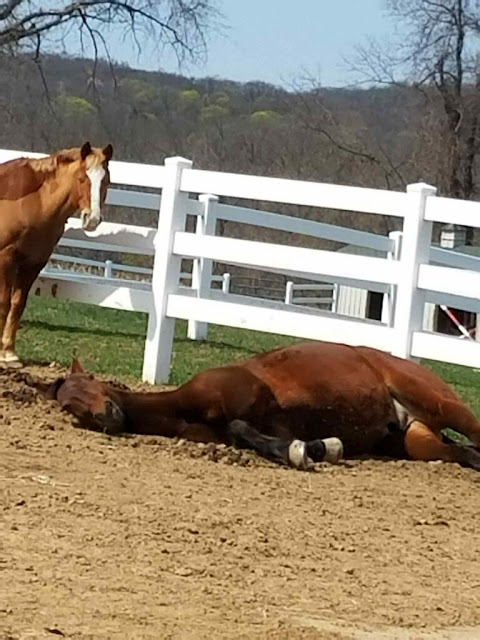 Dino shares his food with Sully without complaint. He lets Sully tell him what to do. He PLAYS with Sully in the pasture, and will lay down to sleep with his big buddy watching over him. Their relationship has only gotten stronger with all of the traveling they do together, and Dino and Sully have the most lovely friendship - I almost never witness any kind of fighting or tension between them. When Sully is unsure about something, Dino rises to the occasion and is brave enough for both of them. Sully leads the way in the hunt field, and puts Dino in his place when the little jerk gets too big for his britches. Dino's even learned to self-load and unload from the trailer by watching his friend Sully!

I think that a big reason why Dino is able to relax under Sully's leadership is not only because his environment and food situation are so secure and reliable here, but because Dino has also taken the position of Herd Leader for the girls, and fulfills his need to be the boss in that way.

Dino, Millie, and Mabel form their own mini-herd within the larger group. After the first two weeks of living in abject terror of the donks, Dino did a complete 180 and adopted them as his own little minions. It is the sweetest thing to watch him care for his girls, always aware of where they are and what they're doing, keeping the big boys from chasing or playing too rough with them, and letting them share his meals. Dino and his girls will even lie down and cuddle together in their stall on cold winter nights, and he often stands guard while they nap. If Mille and Mabel start making any sounds of distress, Dino will run to their rescue and put himself between them and any perceived danger. It is so, so precious to see my grouchy old man caring for his girls with such tenderness! The three of them will often play together, and most days Dino grazes alongside his girls instead of with Sully and Chance. 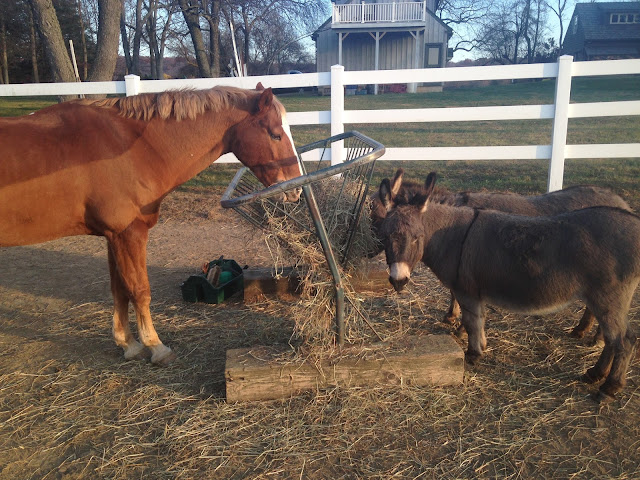 Chance is the new kid, arriving at Orchard Hill just last June, and it's been very interesting to watch him as he figures out his place in the herd. While he's the biggest of the three horses, he's also the youngest and the lowest on the totem pole. Chance hasn't seen much of the wide world, living most of his life on the farm where he was born, and is often easily overwhelmed by new situations. He hates getting in trouble, so he quite naturally fell into his submissive position in the herd. Dino can't stand Chance even looking at him the wrong way, and relishes chasing him off with an ugly face and a snakey neck, swinging his lighting-fast orange butt around to kick at Chancey if he gets too close. Chance is NOT welcome to share Dino's food, and is required to keep his distance from my little old man. But kind Sully has taken Chance under his wing, and will share food and space with him. Chance and Sully spend most of the day together grazing, napping, and playing, and Chance often looks to Sully for direction and security.

Lately, though, Chance has become much more confident and is starting to stand up for himself, and push the limits of his position in the herd. He's beginning to say "NO!" when Dino or Sully try to move him around, and has been testing out a bit more of an assertive attitude. I'm not sure he'll rise to the position of herd leader, but it's certainly interesting to see Chance start to test the boundaries! 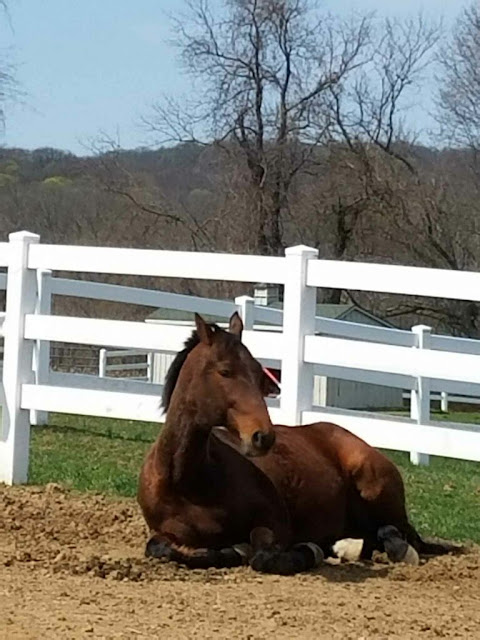 Observing herd dynamics is one of my great joys in being a horse owner and caretaker. Watching our horses and donkeys interact with each other has taught me so much about communication, behavior, their individual personalities, and equine psychology. Watching horses do their thing out in the pasture is one of my absolute favorite things to do!

Do you love to watch your herd as much as I do? Where does your horse fall in the social structure? I'd love to hear all about it!