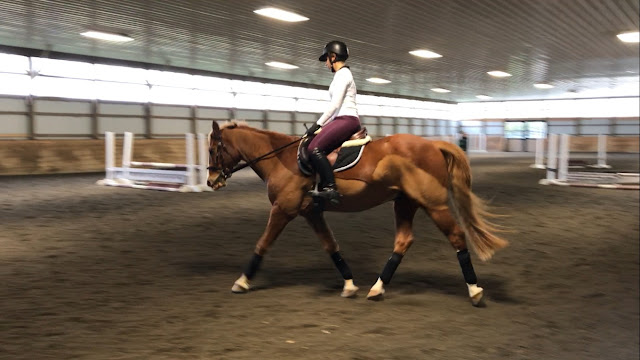 Before we got started riding on the second day of the clinic, we met in the tack room with Dorothy for a short un-mounted session.

We talked about how when we try to force something, we're often very ineffective. As riders, we expend a lot of energy trying to MAKE things happen with a lot of physical effort, and that often backfires on us. We tire out before we get anything accomplished, our horses are reluctant to comply, and the whole thing falls apart.

To illustrate this, we did another neat partner exercise. I got to be partnered with our clinician, Dorothy, so definitely got the full effect of this one!  She placed one hand on my bicep and the other under my wrist, and told me to resist as hard as I could and prevent her from bending my elbow and pushing my forearm up. I'm pretty strong for my size and put up a good fight, but Dorothy had more leverage and got my arm up easily.

After that, she told me to center myself, get as grounded as possible, focus on my breathing, and imagine that my arm was a fire hose with water gushing out through my fingers. She told me to set my thoughts firmly on NOT letting my arm be pushed up, but not to use any kind of physical resistance to do so.

I closed my eyes, breathed, and imagined water coming forcefully up from my center through my arm and out my fingers. My arm started to feel heavier, and Dorothy had a seriously difficult time lifting it! It was crazy how much of a difference there was between my physical and mental resistance against her. I got to try lifting Dorothy's arm too, and I could NOT get it up when she was grounded and thinking about making her arm heavy, but if she broke focus or stopped breathing, or tried to resist me with just the physical strength of her arm, I could easily push her arm up.

If I had any doubts about the fact that this sport is 90% mental, they were totally dispelled at this point!

Then it was time to ride! Each lesson was made up of only two people, which was really nice and allowed for everyone to get plenty of individual attention on what they needed to work on in the moment. I was paired with a really sweet woman who was mounted on an adorable little chestnut appy lesson pony. It was the Pony Power Hour! 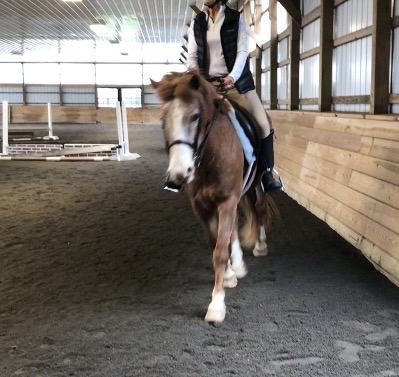 The focus of our lesson was on getting more out of our horses with less physical effort on our part. I was pretty pumped about this, as Dino is really talented at getting me to work way harder than he does.

We started with walking and really focusing on feeling our ponies' motion, and how their bodies move ours. Dorothy said that "following the motion" isn't something that we actively DO, it's something that our horses do to us. That idea made a huge impact on me, and really stuck with me during and after the clinic. We spent time feeling and thinking about the way our ponies' backs were moving our seat, their necks were moving our arms, and how our feet actually make a walking motion along with our ponies' shoulders. I'd never noticed how my feet move as my pony walks, and it was pretty funny to feel it for the first time!

Once we were in sync with our ponies' motion, we worked on sending them forward and back in the walk using primarily the energy in our centers. Dorothy asked us to imagine that there was a spinning ball sitting in the bowl of our center, and that spinning it faster would send our ponies forward, and slowing it down would make them walk slower, too. I imagined that my ball was glowing and sparkly, because why not!? Dino was super on-point with slowing down from just my imaginary spinning ball, and got better and better about moving forward as the lesson went on, but I definitely needed to use a stronger leg aid.

He was AWESOME at halting with very minimal aids, too! All I had to do was exhale deeply and think about my ball coming to a stop, and Dino rewarded me with a fantastic square halt.

We did a ton of transitions in the lesson, progressing from going back and forth in the walk and halt to asking for the trot with just an exhale and a spinning of our imaginary ball. Dino was a little sticky with this at first and needed a strong leg aid too, but soon was picking up the trot when I imagined "revving up" my spinning ball, breathed out, and lightened my seat. It was really cool to feel him listening for my next request as the lesson went on, and thinking about what these very quiet aids meant. I really liked having the opportunity to break down and be thoughtful in riding every transition, thinking intently about my own body and breathing before asking Dino to do something. It afforded Dino the ability to respond without being blocked or hindered by me, and I noticed the quality of his gaits and self-carriage really improving over the course of the lesson as well.

I also worked a lot on my 'firehose arms' in the lesson. My tendency is to straighten my elbows and carry my hands too low (especially when my reins are too long!), which breaks up my contact with the bit and is just ineffective all the way around. When I concentrated on weighting my elbows down, keeping my hands up, and sending the imaginary water and energy through my elbows and out my hands, Dino felt like he could move forward more easily and reached out for the bit. Another image that really helped me with my hands was to imagine that I was holding the bit with my fingers, and that the rest of my arm was a giant rubber band that was stretching with each movement of Dino's neck. I found that helped me keep a much more consistent, elastic contact with the bit!

The final part of the lesson was a progression of an exercise that began with a halt, rein back 3 or 4 steps, and then walking forward. We focused on achieving each transition with the most minimal aids possible; ideally with just our spinning ball and a deep breath and very, very soft rein and leg aids. Dino responded so well to this, and it was a great exercise to tune up the go button. He responded to lighter and lighter aids as the lesson went on, and by the end was CANTERING out of the rein-back!

The canter work was actually pretty good, and got even better when I remembered to breathe out, weight my center, let Dino move me, and send energy forward through my firehose arms. Dino took the contact, lifted his back, and motored around the indoor like a champ.

We also worked a bit on moving towards installing a canter/walk transition. While we have a consistent walk/canter, coming directly back down to the walk isn't really a thing we do. Dorothy helped us refine the transition down from canter, and we eventually got back down to the walk from the canter with just three trot strides in between. Once again, the more balanced and grounded I made myself, the easier this transition was for Dino. I was really pleased with how we had both improved over the course of the ride, and was looking forward to continuing to work on the things we had learned.

While the clinic wasn't completely groundbreaking and we didn't do anything "exciting," I really enjoyed this dive into Centered Riding. It's not often that we make such a detailed breakdown of how we do the most simple things in the saddle, and just changing the way I thought about my body and how I was asking things of Dino made a distinct difference in how he carried himself and how we worked as a team. Taking the time to be quiet and feel what's happening in our bodies and our horses' bodies is SO valuable, and I loved getting guidance from Dorothy in doing so. 10/10, would definitely take the Centered Riding plunge again! 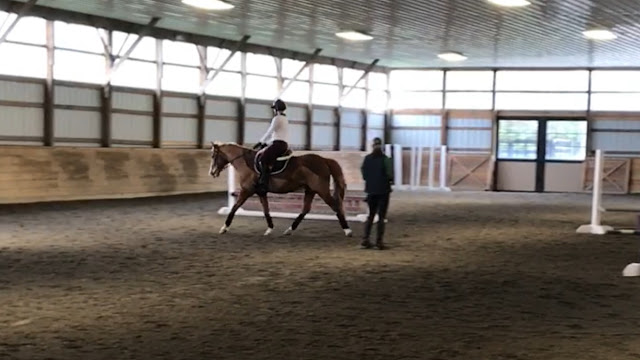