Last night Dino and I went cross country schooling for the first time ever. It was an emotional evening to say the least. Additionally, apologies for blurry action photos! We were losing light and our iPhone cameras were not quick enough to catch clear pictures, but I still wanted to share with y'all.

It is well-known that logistics stress me out, often a lot more than the thing that I'm planning logistics to get to. Put me in an airport with a flight to catch on time - total wreck. On the plane? Cool as a cucumber. During a clinic, show, or lesson, I'm totally relaxed! But in the truck on the way... panic attack.

So I was getting pretty anxious in the hours leading up to our departure for the Bucks County Horse Park. I got to the barn around 5 to get Dino ready, pack the trailer, and make sure all my gear was together. Michael and Rachel were planning to meet me there around 6:30, load up, and head out. Naturally, Rachel got stuck in traffic, Michael was mostly on time, and it looked like a rain storm was going to blow through at any moment. HELLO, ANXIETY! I was worried about the rain, worried about having enough time to ride before it got dark, worried we'd get in trouble because the course was closed except for the Starter and Elementary level fences, and just generally worried about nothing in particular.

But somehow we managed to get three humans and a pony all loaded up and over to the Horse Park. First step accomplished!

My rockstar crew and I did a super-speedy tack-up, I got locked and loaded into Rachel's safety vest, and we headed out to the course. I was mildly terrified, but Dino was absolutely incredible.

I have quite honestly never seen my pony so happy as when he was out on the course. Ears up, relaxed, curious, and confident the entire time. Dino absolutely LOVED it! We warmed up trotting and cantering in a big circle around the water complex, and Rachel had me put my stirrups up a hole so I could get out of the saddle a little better. Dino was so chill that I was having a little trouble getting him to open up his step! Once we were ready, we headed over near the show rings to pop over some stadium jumps that were set in the field there. We jumped a crossrail and a little vertical, and then I aimed my pony at our first little log jump. Dino, of course, took it like he's been doing this all his life.

I chose to trot most of our first little fences. I wasn't feeling panicky or overly anxious, but a sense of caution was present in my mind. Everything we started with was 2' or under with no width to it.

Dino was amazing and never even hesitated. Once I got more comfortable, we started jumping slightly bigger fences from a canter, and my pony continued to amaze me with his XC skillz. 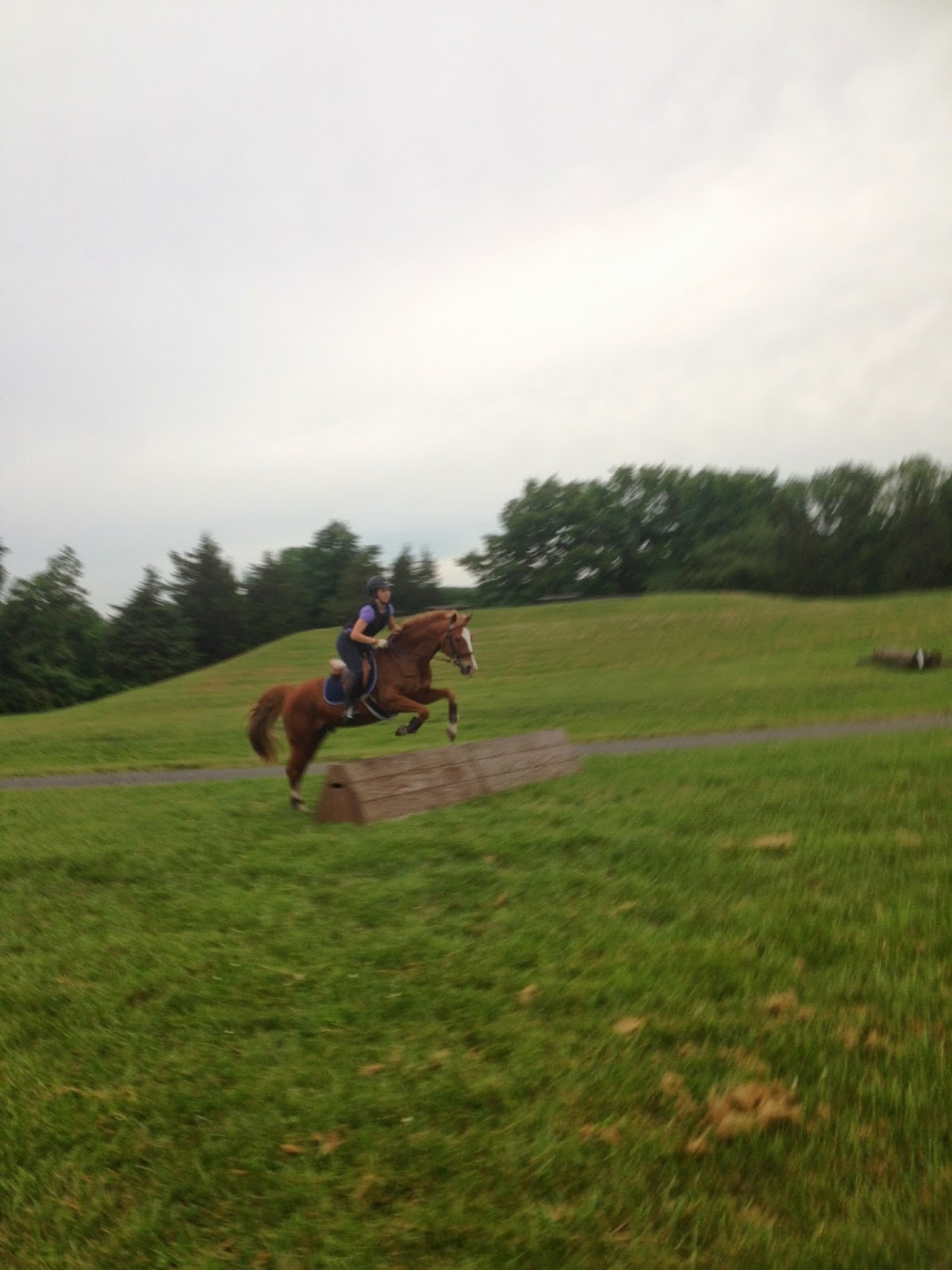 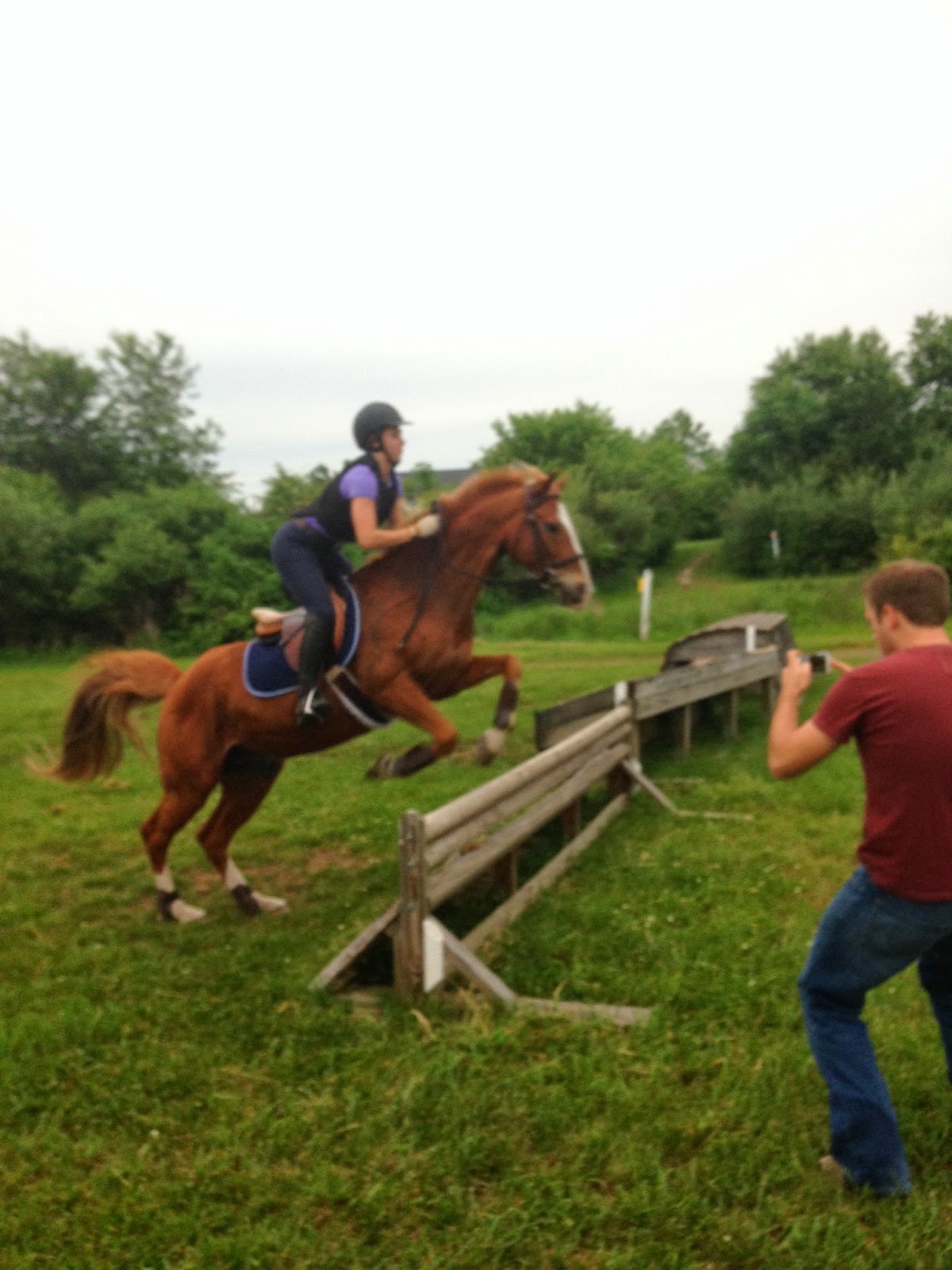 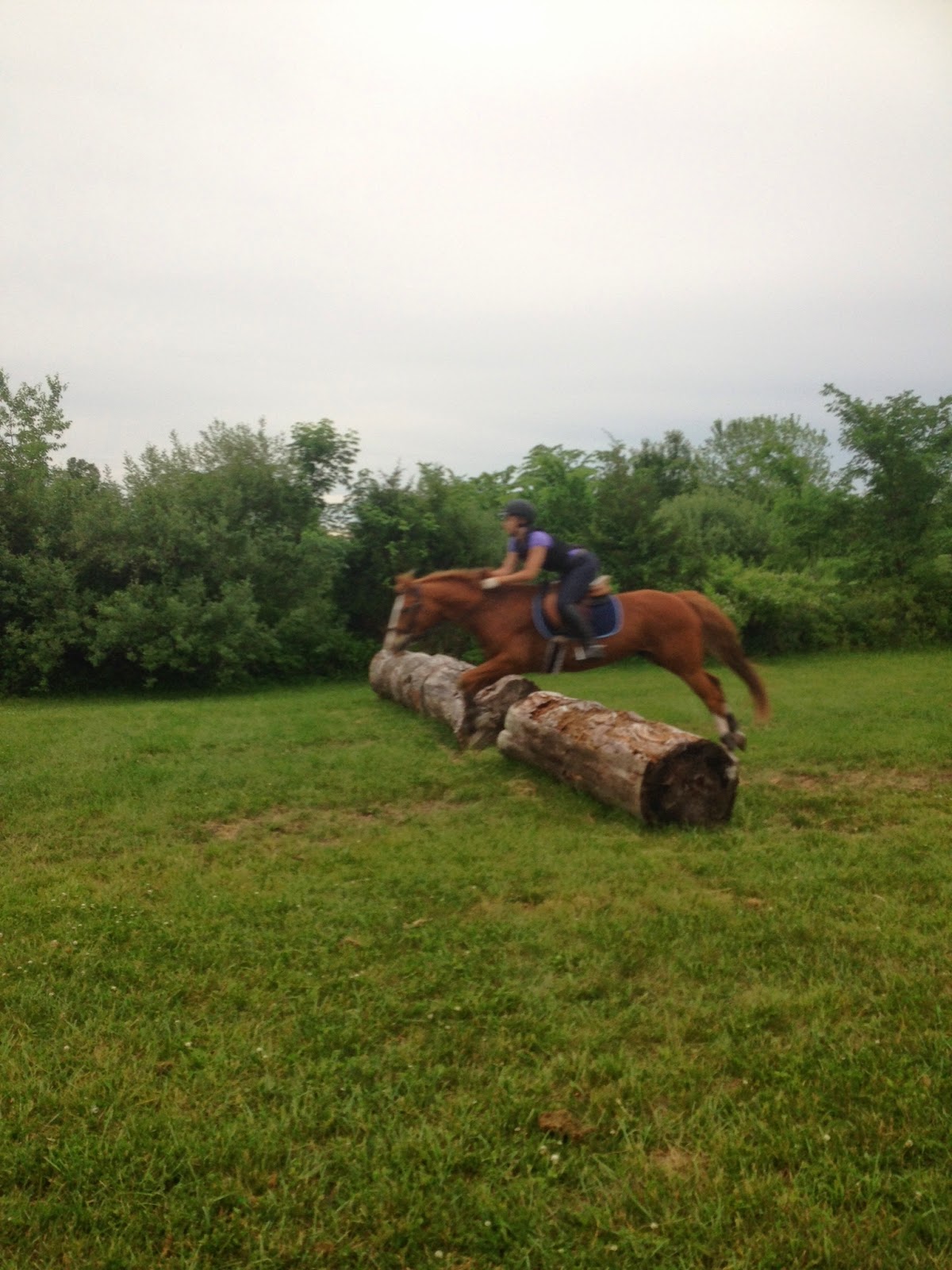 A few times I opted to chip the last step to the jump, just because the short distance is my security blanket and when I wasn't quite sure, I'd hold a little. Dino jumped everything like a cross country machine, and totally took care of me when I wasn't feeling super confident.

I was astonished at how QUIET Dino was out on cross country... Rachel had originally asked me if I was planning on bitting up for the outing, but I just put him in his regular snaffle, like always, and he never got heavy or rushed once. He actually landed off the fences even better than he does in the ring; landing softly and loping away instead of bearing down and running. He was So. Happy.

To be honest, a couple times I thought I would burst into tears just from the emotion of really stretching out of my comfort zone, but I held it together.

And then Rachel walked us over to a group of banks.

Cue feelings of panic and dread.

I convinced her that going down was not the way to have my first bank experience, so we started with up.

I got in my two point, grabbed some mane and trotted Dino towards our first little up-bank.

Which he tackled fearlessly! 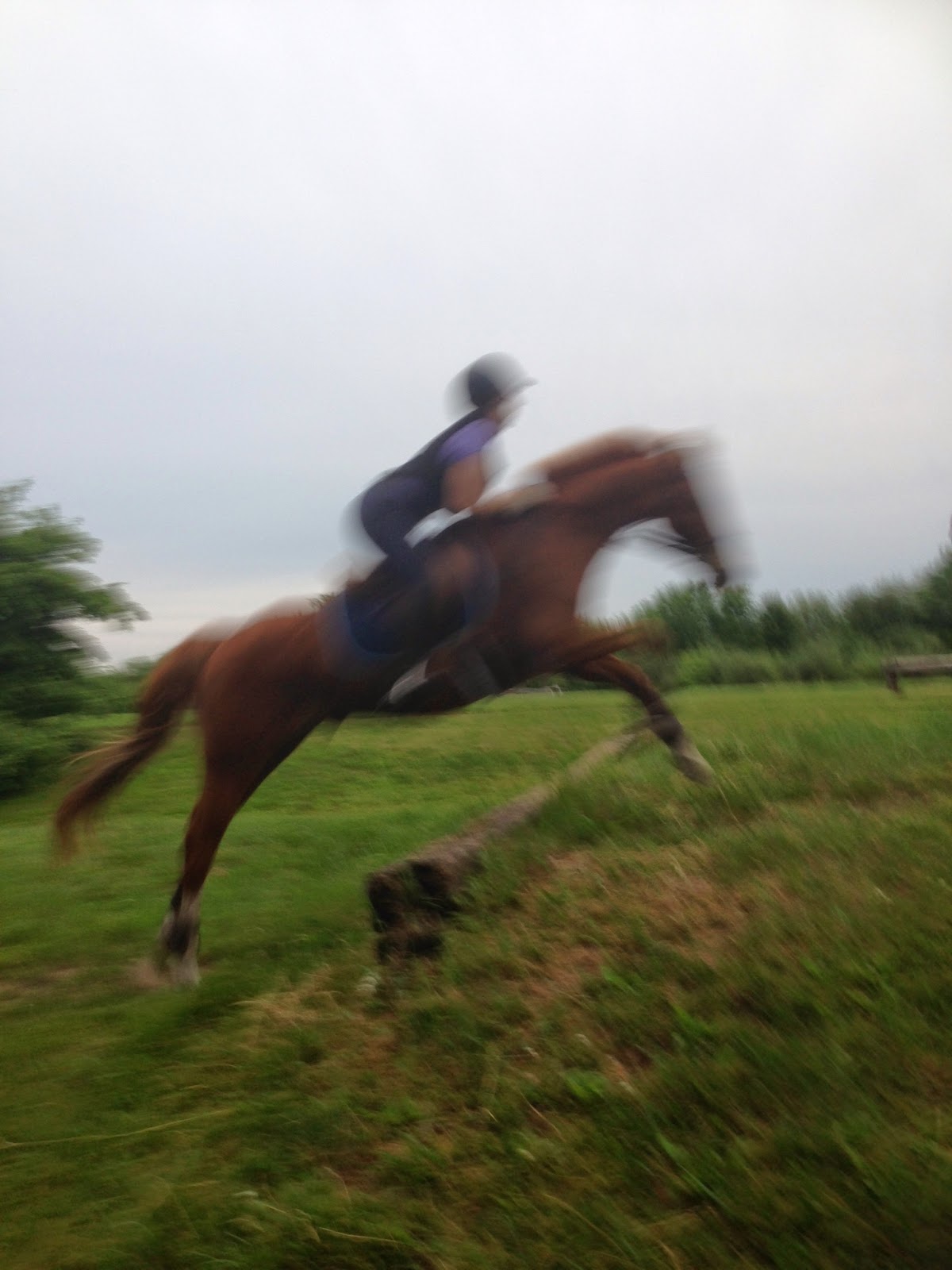 Dino totally killed the bank. Like ate it for breakfast killed it, and then cantered boldly towards the down bank on the other side, which I promptly steered him away from. He was incredible!

Up bank conquered, time for the down bank.

The down bank was definitely the scariest and most stressful part of our outing. I do not like going down. I have only recently mastered trotting and cantering down gentle slopes. Down is not my friend. And you want me to jump down a bank!? NO THANK YOU.

But Rachel always knows how to push me just enough, and talked me through it. One of the best things she said to me was that Dino already knows exactly what to do - horses just have an instinct for this sort of thing. She told me to just trot down it, and ride it like I was going down a slide.

I took a deep breath, mentally put my life in my pony's hooves, and headed towards the bank.

AND WE DID IT!


It was scary, but we did it! I JUMPED A DOWN BANK. I still can't believe it!

After that, Rachel wanted us to hop up a bigger bank, but Dino broke down to the trot on the way to the bank, got discombobulated and unbalanced, so I turned him away from it and decided not to attempt it. At that point I really started getting panicky, so I took a break for a minute just to regain normal breathing patterns. We ended by jumping some little railroad ties, and then called it a day.

I would count our first cross country schooling a complete success. I still can't believe what we accomplished, and looking back at the struggles we were having a year ago, I never would have even attempted what we did last night back then. Our partnership has grown so much over the past year, and it's incredible to see how much Dino and I have come to trust and believe in each other. I really feel like we are teammates and friends. And he absolutely LOVED going cross country! Dino is so, so good at it, and now I'm having conflicting feelings about switching 100% to eventing because of it.  I've never seen him happier about his work, ever. Something to think about.

I also couldn't have done what I did without Michael and Rachel. They are amazing, and so, so supportive. With them by my side I have accomplished so much more than I ever could have on my own! 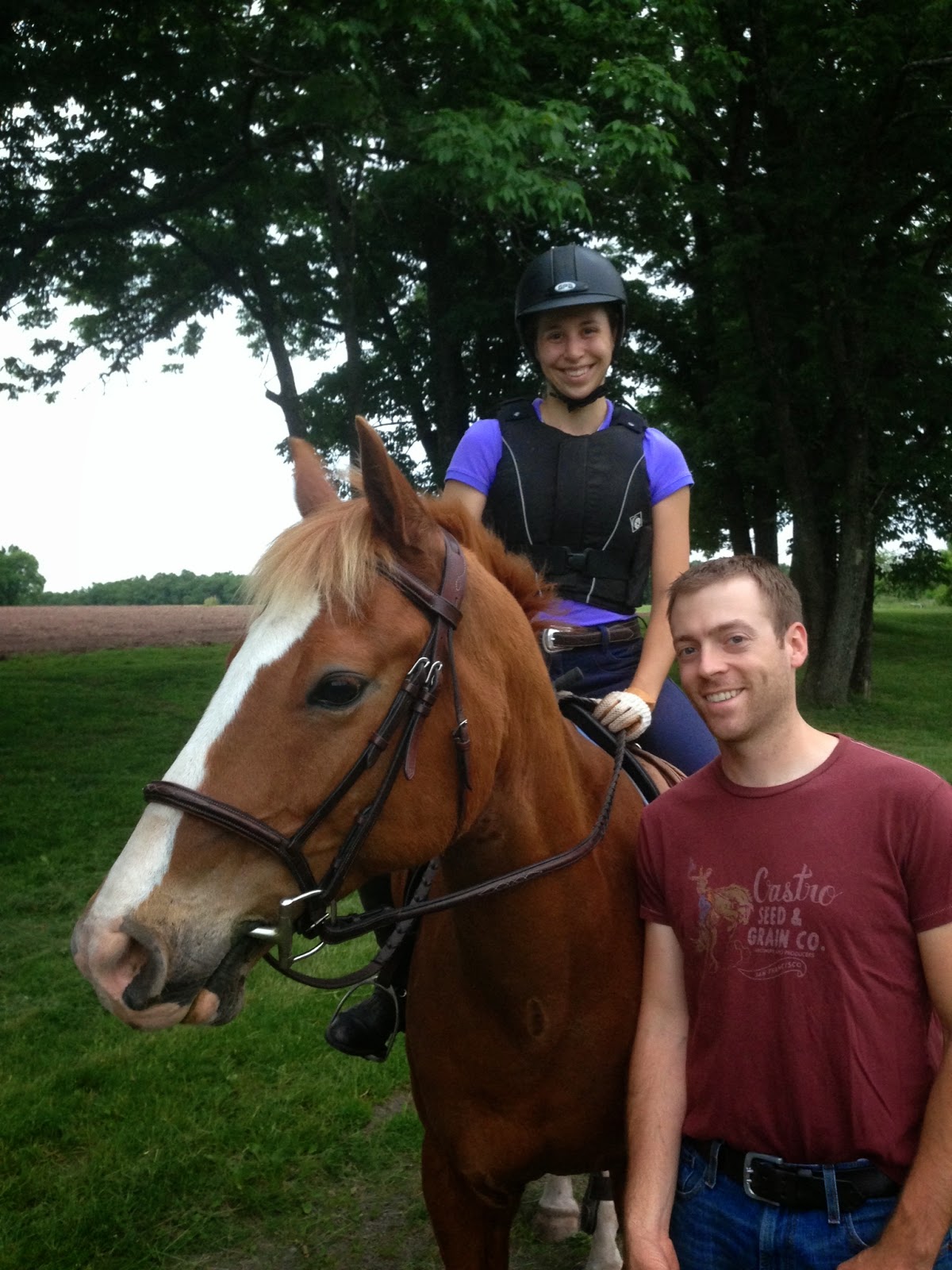 And then, to top off our awesome evening, my ankle collapsed as I was STEPPING OUT OF THE TRAILER and now I'm pretty sure it's sprained.

So now I'm sitting here with my foot elevated, wrapped in zebra-striped vet wrap, hoping I can manage to stuff my swollen ankle into some boots this evening because I have a date to ride with my friends, dammit, and I was really looking forward to it!

Life is so funny sometimes.