The Lightbulb Turns On, And We Go Through Some Ugly 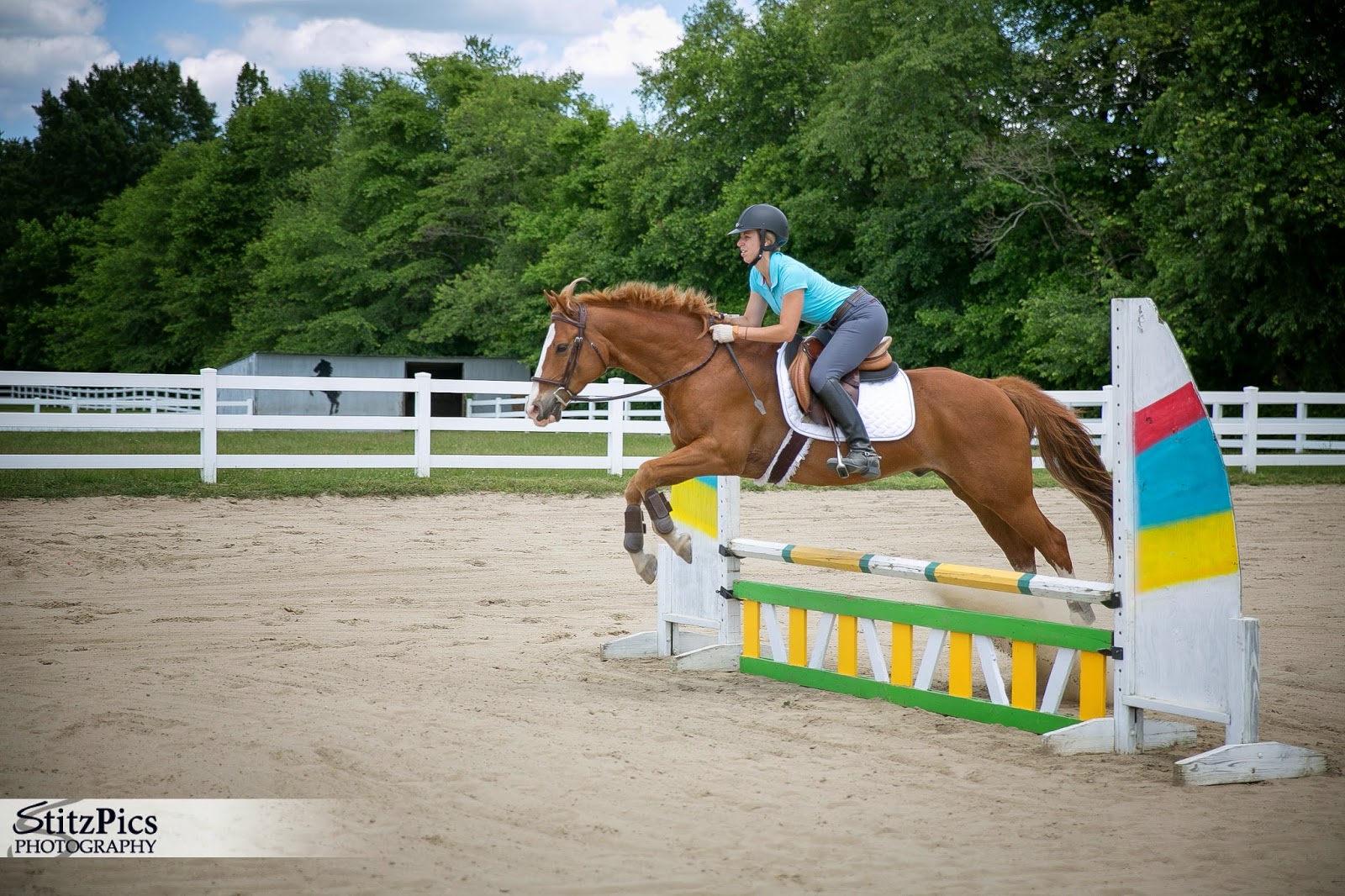 After a day off on Sunday, I got to the barn on Monday last week ready to get down to work and practice the new concepts we'd learned at the clinic.

I warmed up very intentionally, trying my best to send the softest signals possible, and back them up with our 'magic go button' when necessary. I wasn't too concerned with Dino's frame at this point, just wanting to get him responsive to very, very quiet aids.

And what do you know, it worked. Funny how the things you learn from talented professionals actually help you improve. I had Dino moving forward and back off my seat, and sideways from a little swing in my hips, which was one of the first times that that's ever happened! I concentrated on being light, light, light, and lifting my seat when I asked Dino to move forward, giving his back a place to go. He responded really well, and felt nice and loose underneath me.

At the walk and trot, once I concentrated on being soft, I was able to start steering WITH MY EYES. No rein. No overt leg aids. I just looked where I wanted to go, and he went. It was pretty awesome how a more respectful, quiet ride got the best response out of my pony. It's going to be tough to get past the need I feel to over-ride him all the time, but I am even now starting to get a taste of what it will be like when I do!

The canter, as usual, was the toughest gait for us. I had to REALLY focus on being soft and not driving with my seat. I tend to over-manage the most at the canter, so this took some intense concentration. It was so, so hard for me to just follow and close my leg when Dino started to back off a little instead of sitting down hard and driving. But he did respond better to it! And I was able to start moving him to the outside with my hips instead of going right to my spur.

And as I'm trying really hard to do less in the canter, I realize that if I want my pony to go in self-carriage, I need to actually let him carry himself instead of doing all the work for both of us.

It made me feel incredibly stupid and incredibly profound simultaneously.

I also 'discovered' during our ride that when I look down at my pony while trying to get him to go forward, I end up blocking him and not getting very far. During my session over the weekend Dr. Jenny kept telling me to look forward and "give him somewhere to go". I can now see why! Looking down to check out what his head and neck are doing is not conducive to giving Dino a clear purpose when it comes to marching forward. 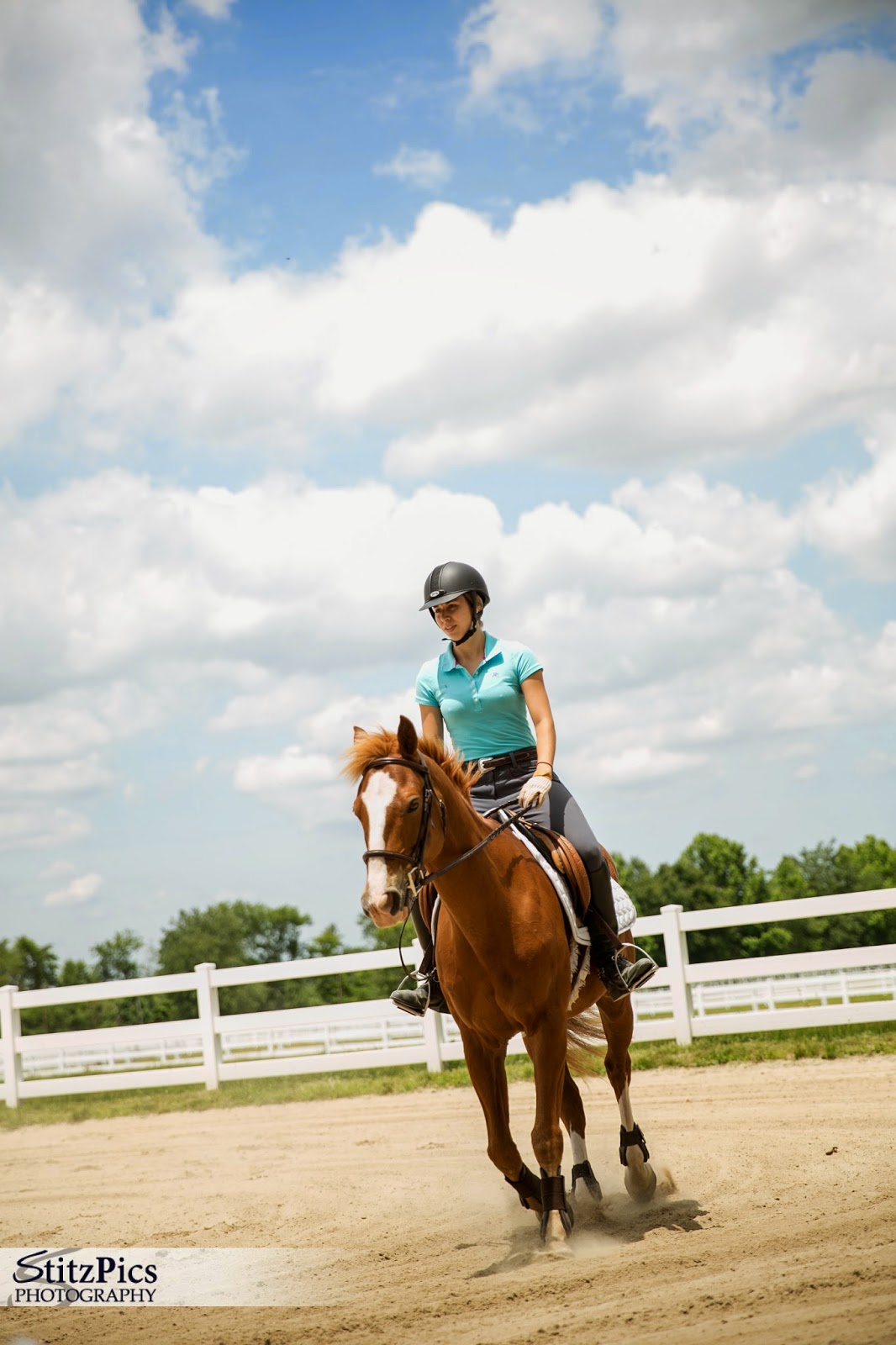 Our next couple rides last week were not as miraculous. Whether it was because Dino declined to pee before we rode and was a little uncomfortable, or was just not into working, or decided to see how little he could get away with since I started using lighter aids, I suddenly found myself having to really get after him to just Go. Forward.

Knowing that we share the same personality and that it can take a big blow-up to get me to apologize or submit or admit I was wrong, I just kept at it, trying really hard to keep my emotions out of it and just correct my pony firmly when he ignored my aids.

Eventually it paid off, and I got my forward, round, compliant pony back, and we had a great run-through of our dressage test, despite a break from the canter because he was exhausted at that point. Woohoo!

The next day, whichever day it was, I had a jump school scheduled for us. Again, I had a sticky, icky, non-responsive pony at the start of my ride, though not quite as bad as the day before. Again, I kept after him every time he ignored me and eventually got a good hand-gallop going to get loosened up for jumping.

I warmed up over a couple crossrails and then made myself a little course, thinking ahead to the HT next weekend and wanting to be confident in our ability to march into the stadium ring and git 'er done. Everything was set around 2'6" ish with one 3' fence thrown in there for giggles.

The first couple attempts only got us to fence 3... I just did not have enough impulsion or attention from Dino to continue safely, so I just kept starting over, and eventually we had the focus we needed to finish the whole course.

And then I kept going, and practiced an outside oxer - to - diagonal line that I wasn't 100% happy with, and jumped it until we totally nailed it.

This is one of the first times in the last year that I've had the guts to just keep working at jumping, by myself, without any coaching, until we got something right. Normally I would let myself be done after doing the course once, out of fear that if I tried again something would go wrong. This time I didn't even think about it, I just went to work.

If any of y'all have worked through fear or anxiety in riding...  you know what I'm talking about! To be able to ride with total confidence in my skills and my pony is an incredible feeling.

And to top it all off, I had a phenomenal dressage school on Saturday morning that I did end early because Dino was such a flippin' rockstar. [Note to self: Warming up on a long rein to stretch out, then going into haunches-in and shoulder-in creates a very connected pony. Replicate that at shows.] We even had some baby half-pass going on, AND a lovely, connected, balanced left lead canter, which is tough for His Royal Highness. I guess our 'discussions' from earlier this week finally got through to him.