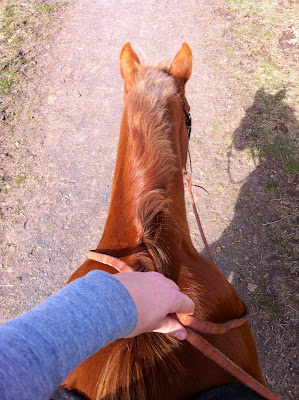 Where do I begin? So much has been going on in our little world lately!

I bit the bullet and bought a western saddle. ($250! On consignment! BARGAIN, BABY.) I've been riding Dino in it a few days a week, and the thing just feels like home. (aside from the rock-hard seat, but hey, you can't have everything.) Dino really appreciates the variety and a chance to just chill and go in a long frame on our western days.

Aside from that, have you ever read your horoscope and had it be super creepy accurate? I had one of those moments a couple weeks ago. I was reading an article on 4 different horse "personality types," and though I expected it to be really hokey, once I got to the Thinker type I stopped dead in my tracks. It was like someone had been spying on me at the barn with a hidden camera. It was SO DINO. The article said that horses who are "Thinkers" like to take things at their own pace. They are easily bored and frustrated by repetition, and see no point in repeating something they've already done correctly. They aren't flustered by new challenges or situations, and prefer to calmly think through them at their own pace instead of becoming overwhelmed. "Thinkers" need a job, and prefer to be going somewhere instead of going around and around in circles in a ring. They like to be rewarded for a job well done, whether it be with a pat or a short break.

Um, WOW. I already knew my pony had all those traits, but the article really brought the point home, and changed the way I think about how I ride and train. I've been trying to get Dino out of the ring a little and reward him with a break when he performs well. He seems to be happier in his work when I let him walk on a long rein outside the ring after a few minutes of good solid work. Letting him know that I won't drill him to death definitely makes a difference in his attitude. Reading the article was also like reading a description of my own personality, which was a liiiiiittle creepy.