This weekend Dino got his long-awaited bodywork tune-up from our very favorite equine massage magician. Unfortunately, he also decided that he now only wears one shoe, so I didn't get to take him for a spin afterwards to share in how good he felt. If anyone needs me, I'll be trying to psychically communicate with my farrier to get him to return my texts and come tack the shoe back on so I can ride on Sunday.

Despite the lost footwear, Dino really enjoyed his bodywork session and had some dramatic postural changes as a result. He's figured out how to work with Tara to get the most 'feel good' stretching out of it, and during the neck stretches especially the blissful look on his face was priceless! 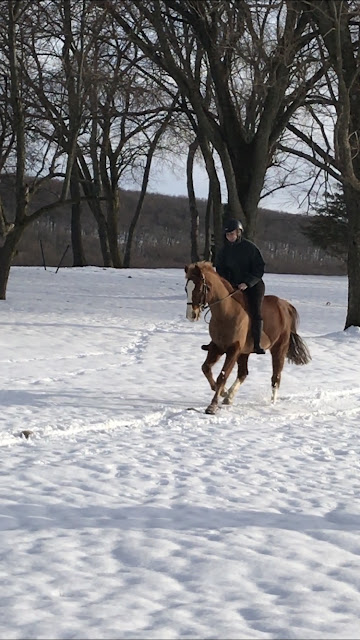 Tara was VERY pleased with Dino's overall body condition, topline, and muscling. Despite having done next to nothing all winter (and most of the fall, really), Dino has retained most of his muscle and really doesn't have any catch-up to do in that department as we look towards spring and getting back into real work again. The diet we've had him on over the past couple years is clearly agreeing with him, and I'm happy to see that no changes need to be made in that department.

She said that the scar tissue that has formed around the site of Dino's laceration injury hasn't impinged on his flexibility at all in that area, which I was relieved to hear. His entire right side was, however, all kinds of jacked-up, which confirmed what I'd been feeling over the past couple months. While the muscles from Dino's withers down to the point of his shoulder were pretty loose and soft, his pecs, the underside of his neck, ribs, and pretty much the entire right front leg were tight and stiff. Tara worked this side of his body until all the kinks were worked out, and Dino's improved posture and relaxed face told us that he was feeling MUCH better on that side afterwards! 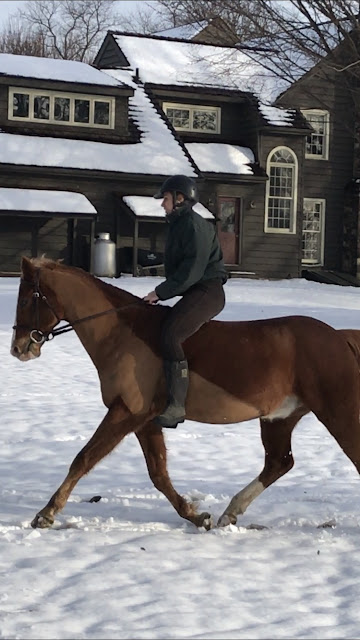 Dino's back, the top of his neck, and hind end were all in pretty good shape, though there is still a slight asymmetry in his back muscles. Tara recommended that we keep the shim in the left rear panel of the half pad for now to support the left side of Dino's back where he has less muscle than the right side. She also suggested that I sit with a folded washcloth under my left seatbone in my chair at work since I've been prone to collapse on that side lately. We truly cover all the bases when she comes out to work on Dino!

As always, it was a pleasure just to talk with Tara and have her educated eyes on my pony. She often identifies problem areas I wasn't aware of, or confirms things that I feel when riding, and she ALWAYS makes Dino feel like a million bucks when she works on him. It's so much fun to 'talk shop' with another sport pony enthusiast while learning how to keep my own sport pony at the top of his game. Here's hoping that the next time we see Tara we will have been in good, regular work for a few moths!