WARNING - there are gross and gnarly wound photos in this post; if that squicks you out, skip this one!

Saturday was likely to be one of the very last beautiful, temperate fall weekend days in this part of the world. I planned to spend most of it at the barn setting a new jump course, riding, cleaning tack, and then heading to a different farm to body clip a friend's horse.

All of those plans went out the window when Dino limped up to me with this bloody mess:

It was an ugly, bloody laceration on the inside of his front left leg right above the coronary band. Dino was reluctant to put weight on it, and it was streaming blood. After having a moment of panic, I immediately went into crisis-management-mode and pulled him over to the wash rack, took pictures of the wound, washed and disinfected it, and called and texted my vet. She advised me to wrap the wound, give Dino some Banamine, and wait for her to arrive.

My awesome vet arrived at the farm and prepped her surgical tools. She was actually quite pleased with the wound upon inspection. It was a very clean slice, had bled profusely well and flushed out any debris that may have been present, and had only gone through the first layer of tissue. No important structures in the leg were injured at all, which was a huge relief! While my vet said that the wound would likely heal on its own with just bandaging alone, she thought that a few staples and stitches would definitely speed the process along. I gave her the go ahead to sew up my pony. 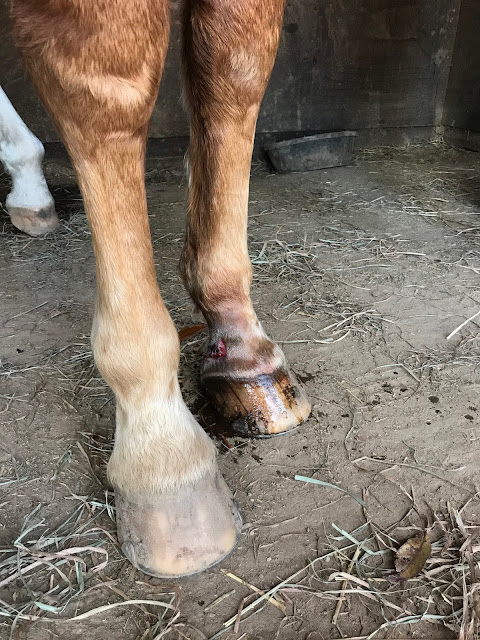 Now, this is the part where Dino is an absolute CHAMPION and honestly the greatest, best pony in the entire world. He stood like a rock for the vet to clip the area, and didn't even flinch when she put a needle into several areas of the wound to administer local anesthetic.

Did I mention that Sully and Chance were both being body clipped nearby at the time, and Chance was thrashing around and making an awful ruckus?

My vet did not administer ANY general sedative. She later told me that she NEVER performs any kind of surgical procedure on a horse without some kind of tranquilizer on board, except for this time, on Dino.

Dino stood patiently and stoically with his muzzle resting on my shoulder while my vet put in five staples and four stitches, closing the wound nicely. He never flinched. 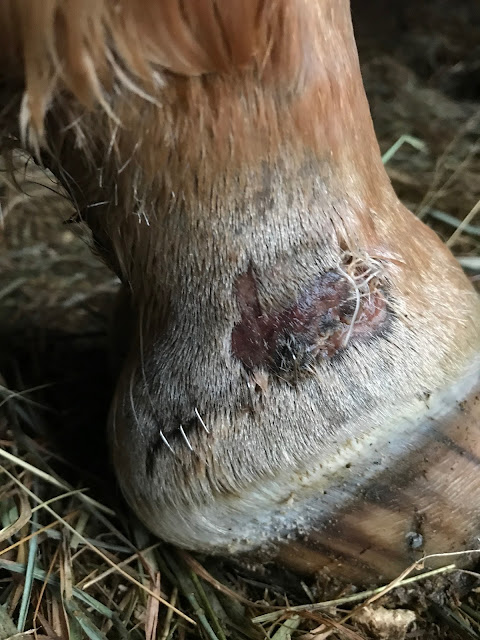 He'll need to be bandaged for another day or so, and is still quite tender on the wounded leg (wouldn't you be?!) but his sutures will come out early next week and after that Dino should be good to go! Because of the nature of the wound, he doesn't need to be on any antibiotics and should heal absolutely beautifully. Unfortunately, his stitches and staples won't be out by Opening Meet next week, which is so disappointing, but I'd rather have Dino sound and ready to rock for the rest of the season than risk the wound opening back up or getting infected by hunting him. I'm so pleased with how the laceration is healing already, and have full confidence that Dino will be off the injured list soon!
Email Post
Labels: injury stitches wound