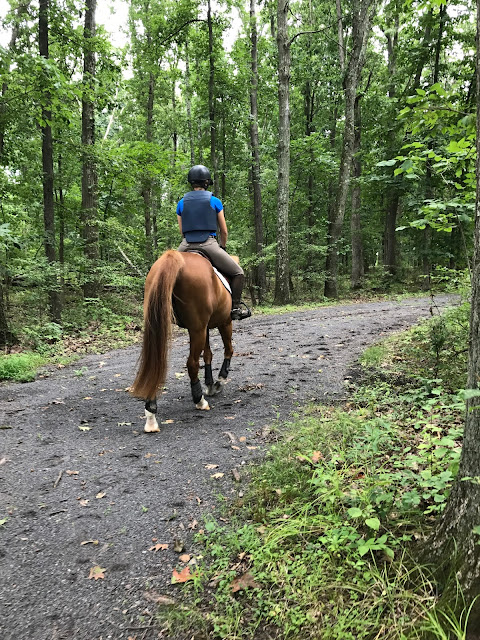 This weekend I finally got us up to the horse park for some XC schooling! My dear sweet husband agreed to come along as ground person, and I had big ideas about practicing our Magic Gallop over some actual cross country jumps, and perhaps even schooling a bunch of BN fences.

Dino warmed up great. I focused on getting him forward, up in the bridle, and tucking his hind legs under his body. After trotting and cantering around a big open area in each direction, he felt ready to get started jumping. I decided to trot him over a wee baby coop, continue on to a wee baby log jump, and then circle around through the water complex on our way to a wee baby brush box.

Not so much when your pony's last experience of "going out somewhere to jump XC" involved a hell of a lot of not jumping, and you go into the ride with the attitude of, "I'll just see how he feels to the fences." This was my first and fatal mistake.

Instead of heading towards those first few fences bound and determined to ride my pony over no matter what, I waited for him to take the lead. He didn't. I needed to put on my Mean Trainer Pants. I didn't. Needless, to say the ride started out with some struggling.

So, we moved around the course, picking and choosing the smallest fences with the best footing since the previous day's rain had made a lot of the takeoffs and landings a muddy, slippery mess. I didn't need to give Dino any more excuses not to jump!

When I rode aggressively like a Mean Trainer, he jumped. When I was a pansy and took my leg off and rode backwards, he did not.

This seems like a lesson I should have figured out by now. I guess I'm a slow learner!

I also noticed a bad habit that was causing me a LOT of issues, and that I hadn't quite understood that I was doing until now. At one point as I was cantering up to a jump, I lost the feeling of Dino being in the bridle. Instead of kicking him up to the bit, I MOVED MY HANDS BACK until I felt connected again. It was an eye-opening moment to become aware of what I was doing and why, and from then on I was able to analyze what was happening on the way to each fence. Could I feel Dino in the bridle? Yes? Keep going. No? KICK HIM UP! This little bit of self-awareness was a total game changer for me!

Despite a lot of frustration, I was able to improve things greatly by the end of the ride. We were able to string together several jumps in a row with a confident, easy canter, jump up and down banks, and canter through the water. That day, I had to be happy with being able to make the pony jump the jumps, even though I wasn't gleefully galloping over BN houses and tables. By the end of the ride, I was eyeing up the bigger fences, confident that next time we'd have a much better starting point to our schooling. Next time I'll be wearing my Mean Trainer Pants!