A Foray Back Into Hunterlandia 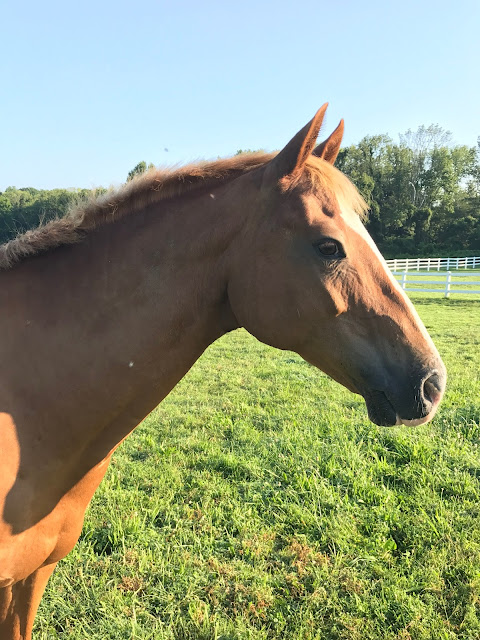 Time for us to go back in time for a lesson recap!

Since my regular coach is still out of commission for a bit, last weekend I decided to head up to take another group lesson with Cristina and her Fancy Hunter Trainer. I haven't had professional eyes on me since June, and was way, WAYYYY overdue for some input. Plus, riding with friends is always fun!

It was unfortunately also really, stupid-hot out, so our lesson was a little less intense than I was hoping for, but I still got some good takeaways from the ride!

We started off with simple flatwork; getting the horses trotting forward and working on our position, alternating between two point and posting every few strides. Knowing that I need to work on re-securing my jumping position, this was a great exercise for me! Hunter Trainer encouraged me to think about holding myself strongly in my core, letting Dino move forward towards a very very light contact, and giving him space to hold his frame and the pace on his own instead of nagging him every stride. It was a good reminder, and Dino's work improved quite a bit as I focused on doing less and letting him be responsible for more. We also worked on large circles at the trot, alternating between posting and sitting, letting our horses move out in the posting trot and bringing them back a bit in the sitting trot. Each transition was slow and thoughtful, and really got me thinking about the details of how I hold my body and ask for the change in Dino's trot and in his bend.

The canter work was more of the same, with a focus on staying strong in my middle (no belly dancing!) and light in the saddle, allowing Dino to travel forward and carry us along without nagging or feeling like I had to hold him together the entire time. It was tough not to micro-manage him, but Dino did respond quite well to more polite riding on my part. Who would've thunk?!

After a break, we got to the jumping. Dino was not enthused about having to go back to work in the heat after standing around, and gave Hunter Trainer a taste of his pony'tude on the way to the first exercise! It was a simple one - trot a flowerbox on the diagonal and then canter around the short side of the arena to a small vertical on the outside. Dino put up quite the protest, bucking and hopping and not wanting to go forward, but I got him over both jumps successfully, if not beautifully. I was reprimanded for going right back to my go-to methods of Heavy Driving Seat and Lots of Spur to get Dino over the fences, and worked for the rest of the lesson on being lighter and doing less.

Do we sense a theme, here?!

The exercise gradually morphed into a little course: trot the flower box, canter around to the small vertical on the outside, take the long way around to another vertical on the diagonal, break down to trot in the short end of the arena, and trot in and canter out of a line of verticals in five.

Our first attempt was not pretty.


Dino was moving off a LITTLE bit better once I realized that today was not a day to let him stand around between turns, but still not carrying us forward enough and not hitting his stride in our Magic Stadium Canter. As a result, I rode too heavy with my seat since I didn't trust him to Do The Thing, and our trot fence was downright disastrous.

Thankfully we got the chance to do it again, and things went MUCH better the second time. I got Dino cantering forward right away, stayed out of the saddle, and tried my hardest to resist the urge to sit and drive and instead just closed my lower leg to send him towards the fences. As a result, the entire course was smoother, Dino jumped better, and we nailed every distance. I was happy to end on that note!

It's always a good thing to make a foray back into hunterland and take another look at the details of jumping position and a focus on smooth, consistent rounds. Especially since I've been in git'er done competition mode for most of the summer, this lesson was a welcome examination of the little things that will ultimately make my stadium rounds even better!
Email Post
Labels: jumping lessons