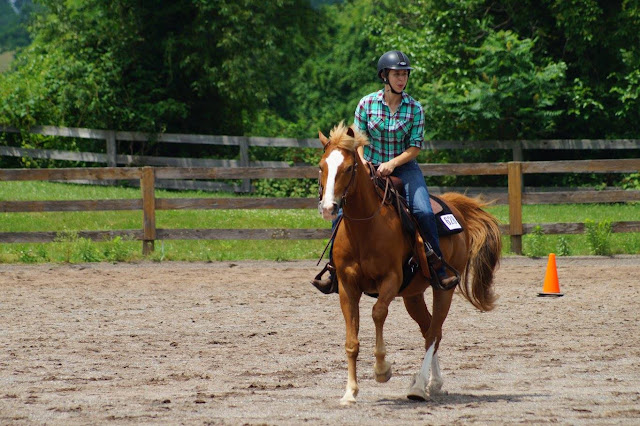 Things I Learned Riding At My First Western Show, Despite Having Spectated Many Western Shows In The Past:

-Safety pins are a necessity. Coming from the land of pinnies, bridle numbers, and tying back numbers on with a string, needing to pin my number onto both sides of my saddle pad was something I didn't plan for. Thankfully my friend's barn family adopted me for the day, and one of the show moms generously lent me some pins.
-Spurs are something I'm definitely going to need to invest in if I do this again! Another wonderful barnmate of my friend lent me a pair for my pleasure classes, and they made a huge difference in being able to keep Dino going along SLOWLY without scrunching my leg up or using too much seat.
-An "extended jog" is kind of like a normal slow trot.
-Trail classes are SO. MUCH. FUN. And I want to do another one!
-We are totally not cut out for gaming. Dino thinks it's real dumb.
-Remember when super-low-rise boot cut jeans were all the rage? So does my closet. I'm going to need a pair of higher rise pants if we do another western show. Thank goodness for long shirts.
-There is fun to be had and skills to be learned in every riding discipline out there, if you just give it a try and keep an open mind!

Dino and I had so much fun at our first western show this weekend! I had a great time trying something totally new for me, and Dino was game as ever to go to work for me, even though he had pretty much no clue what was expected of him. Everyone we met that day, including a couple of the judges, was so friendly and helpful, and more than happy to walk me through things I had questions about, which was pretty much everything. My friend, who I had planned on taking media for me, unfortunately got recruited to steward another ring just as my pleasure division started, so I have pitifully few photos and video! Sorry, guys! Thanks to one of the barn moms, I do however have some barrel racing photos!

We started the day with a schooling pleasure division, which I was feeling pretty confident about after  our warm up. I knew Dino would definitely be going too fast, but he was attentive and I was pretty sure we'd be able to perform passably well in our rail and pattern classes.

That is, until the rest of my competition entered the arena.

They were the Western Pleasure version of Middle-Aged-Dressage-Ladies. Mounted on lovely, typey horses with giant butts and tiny feet, decked out head-to-toe in beautiful clothes weighted down with rhinestones and tack dripping with silver, they outclassed Dino and I by a lot. I had been expecting more casually-dressed riders on green horses in a schooling division at a local show, not these fancy creatures! Nevertheless, we did our best. 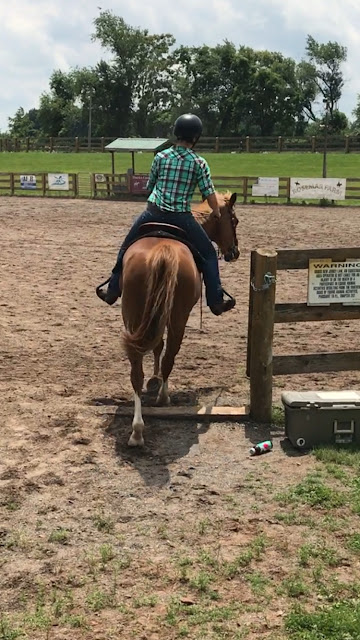 Our walk/jog rail class served to give me a feel for how I'd have to ride, which was MORE. More leg, more half-halts, just MORE. It was really hard to keep Dino going as slow as he needed to be without him breaking, and the struggle was evident to the judge, who pinned us fourth out of four. No mind, we had three more classes to go, and I had a better idea of what I needed to do.

Next up was our pattern class, which blissfully was just walk/jog, because our lope was taking a bit to get organized. We had to walk up to the starting cone, jog straight on to the next cone (which had to stay to our left, for some sort of arbitrary reason that I'm not sure I understand), and then make a circle of unspecified size in an "extended jog." Then we continued the extended jog to another cone (keep it on the right this time!), broke down to a regular jog, and ended the pattern with a halt and backing 4 steps. 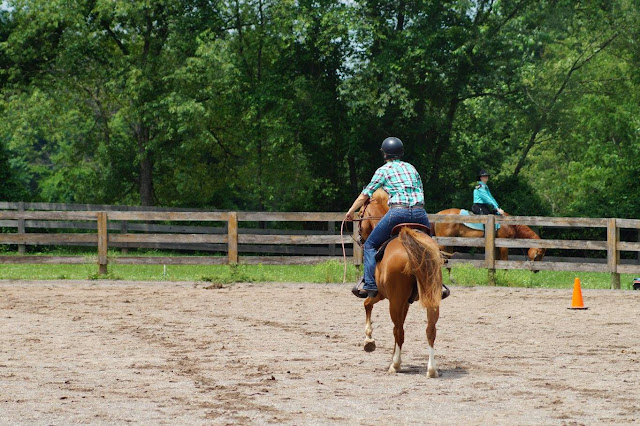 Dino was really awesome in the pattern; I would have liked the circle to be a little more consistent in pace throughout, but he was very focused and definitely got the job done. We were rewarded by moving up in the placings to 3rd out of 4! WOOHOO! He still doesn't move near as 'well' as an actual western pleasure horse, but the little dude put in a solid effort.

We stayed in the ring for our walk/jog/lope rail class, which was pretty self-explanatory. By this point I had figured out the ride I needed a bit better, and was pretty happy with our performance. Dino did break once or twice in the lope, because oh my word it is SO hard to keep him going 'western slow' without him interpreting my cues to mean 'trot'! But apparently the judge didn't see it, or other riders had even more serious errors, as we pinned 3rd out of 5. I was pleased with that!

Next up was the trail class, which I was actually a little concerned about. The course was essentially Trot Poles On Crack, the ring was REALLY small, and some of the turns made approximately zero sense. It was the first time in my life that I worried about my 14.1hh pony having a step that was TOO BIG for the required task - the trail course seemed built for a horse with a 6ft canter stride! Each obstacle was decorated with flowers, pinwheels, and other random items, and I could definitely see how some horses would strongly object to the way it looked. Behold: 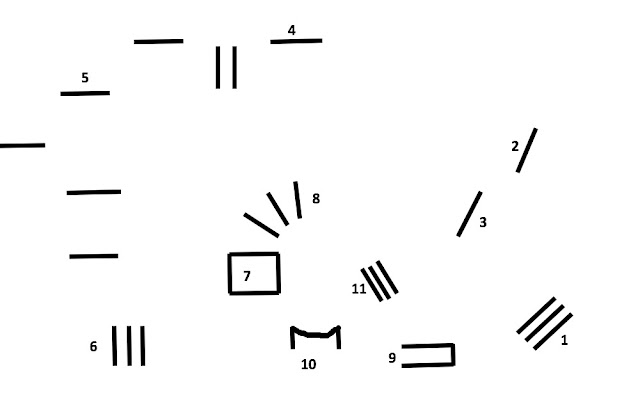 Walk over the first three poles, pick up jog. (was supposed to be a lope, but the judge mercifully changed it to an all-jog course since the footing in that tiny corner was sloppy from the previous day's rain.) Stupid right turn to a single pole, continuing around right to another single pole. Serpentine over single-double-single jog poles, jog around some more poles in a semi circle, keep going around the circle, jog through the three poles into the box. Halt in the box. 360 in the box! Jog out of the box and over the fan and back through the box, into the chute. Back out of the chute. Make a 180 turn and walk up parallel to the gate, open the gate and go through, close the gate. Walk over the last 3 poles. FINIS.

The trail judge was FANTASTIC, and he went over the pattern with me before Dino and I went in the ring, making sure I understood exactly what was expected of us. I could tell that he really wanted us to have a good learning experience, and he was so encouraging and kind to us.

Despite being overwhelming at first, the trail class was without a doubt my favorite part of the show. it was SO MUCH FUN. Dino and I cruised around over all the poles, managed to keep our 360 inside the box, our rein-back was super straight, and the gate was no problem at all. Dino was hunting down the poles, and seemed to be really interested in what we were doing now that I'd given him something to really think about and figure out. I finished the course all smiles, and the judge commented that we had done a great job and that Dino was really cute. We ended up 2nd out of 4 in trail, and I was THRILLED!

We had quite a long break before the gaming division started, so I popped Dino back on the trailer for a couple hours and hung out with my friend and the judge she was working with over in the mini & draft ring. This was my second-favorite part of the day, because hello, MINI HORSE SHOWMANSHIP, and the judge was one of the coolest people I've ever met. He's a well-known local AQHA/APHA/IHSA/everything else judge, and one of those people that you just want to be around. He is genuine, caring, friendly, and sincerely wants everyone he meets to learn and have fun. He gave my friend and I a lot of great advice about showing, shared some life wisdom and some crazy stories, and made sure we were wearing sun screen. Spending time with him was just such a pleasure! 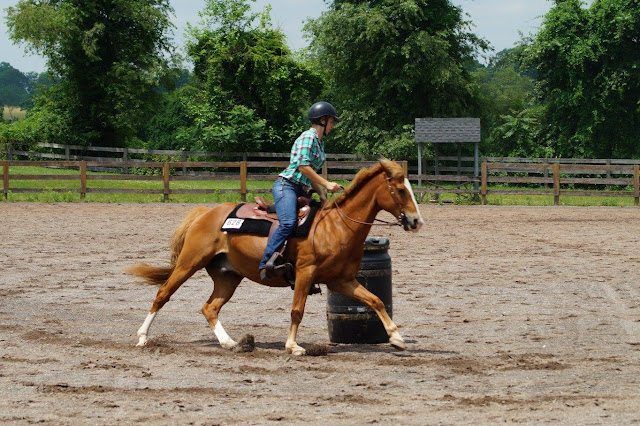 Dino and I ended our day with a couple gaming classes - cloverleaf barrels and barrel dash. It was... not successful. Dino did not see a good reason to run flat-out, or even canter in the cloverleaf pattern. We were solidly in last place in both games, and while it was fun, I'm not sure I'd pay to do it again!

I such had a great day dipping our toes into the other end of the pool and learning about western showing. One of the things that I absolutely love about horses and riding is that there are COUNTLESS ways to enjoy these animals, and there truly is a discipline for everyone. I feel so blessed to have a pony that lets me do a little bit of everything and test our mettle in lots of different disciplines. It's been such a fun and interesting journey with him trying everything from foxhunting to western pleasure! I will absolutely be back in the western show pen sometime soon, and I'm excited to give it a go again now that I know what we're in for!
SaveSaveSaveSaveSaveSaveSaveSaveSaveSave
SaveSave
Email Post
Labels: showing western