Old Friends, New Hounds: This Is Really My Life

My sweet friend Jeannette (horse mom to that fabulous grande dame, Hugs, and exceptional food culture blogger) and I have been talking about hunting together since I started getting interested in the sport last year, and we finally got our acts together and made it happen this week!

Since she has a connection with some members of a different local hunt than the one I've been riding with, we opted to cap with them this week. While I didn't know anyone else there, it was nice to drive 10 minutes down the road instead of 30, and to start at 8am instead of 7!

This hunt was different in a few ways from the one I have been riding with so far this year. The Wednesday morning field was much smaller, and a lot more laid-back feeling than what I've so far experienced. The hunt also leaves from the same fixture each week - the local hunter/jumper boarding/lesson/show barn/kennel where they are headquartered. Instead of riding spread out in a great mob where the territory allowed, the field generally stayed in a single-file line behind the MFH. We hunted territory that was mostly harvested corn fields, which was on one hand kind of a pain, but on the other it was good straightness practice as we had to ride between the rows of stubble to avoid our horses tripping. 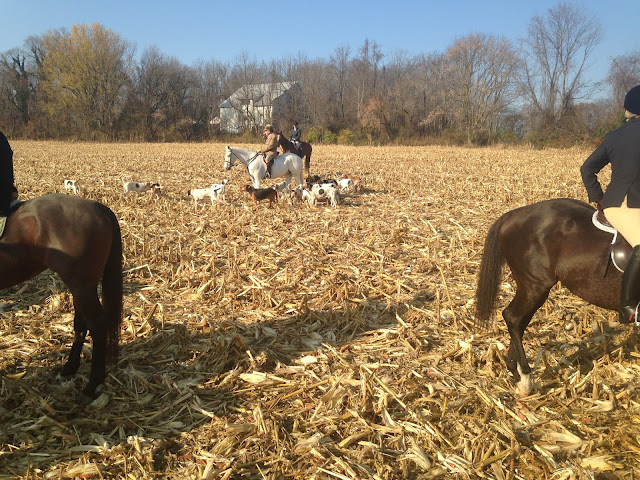 The pace of the hunt was also a LOT slower than what we're used to! We mostly walked, and I found myself reeling Dino in and half-halting all during the trot and canter, only getting to really let him go once when Jeannette and I found ourselves way behind the rest of the field and got to go a little faster to catch up. But, it was good practice for SuperStarHuntPony to have to be patient, and understand that we are not necessarily galloping off at warp speed every time the horse in front of him starts to jog. Most importantly, it was a lovely, peaceful ride in a beautiful place with a great friend.

What more can you ask for!?

The hounds were also inexperienced puppies out for their first season of hunting, and it was quite funny to see them getting sidetracked and distracted, and wandering off away from the pack! The highlight of the morning, however, was getting to watch Jeannette and Hugs be TOTAL BADASSES and go after a wayward hound that had gotten separated from the group and kept running in the wrong direction. I'd never seen Hugs so pumped up to do her job, and Jeanette was pretty impressive with her hunt whip!

Even though the hounds never quite got on a line, it was a great way to spend the morning! Dino was exceptional, as usual, and had a blast exploring some new territory and being reunited with his old trail buddy, Hugs. He was foot-perfect through every creek crossing, ditch, and little jump. He was also SO much more prompt when I asked him to slow down or stop - no discussions about "WHOA MEANS WHOA" were necessary! I couldn't help but let a huge grin spread across my face and laughter escape from my lips as we cantered along a hilltop early on in the hunt.

I was on the most wonderful pony that ever lived, cantering through a field under the bluest sky I've ever seen, next to a fabulous friend on her equally fabulous horse, chasing after a beautiful pack of hounds, and it felt like Dino and I were made for the moment.

This is my life. I really get to do this.