The generosity of my barn family knows no bounds, and these amazing women have been keeping me in the saddle while my best guy is completely out of commission and I figure out what my long-term riding life is going to look like now that Dino is retired from dressage. I can't say enough times how grateful I am for their love and their willingness to let me climb on board their lovely horses!

Next on my dance card was Peterson, a really beautiful chunk of a warmblood hunter horse. He and his mom are just starting to learn about dressage together, and figuring out the complexities of straightness and contact. They are both such hardworking, earnest beings and I love them together! Peterson's human is still figuring out her aids and timing to get him on the bit and round, and wanted me to school him a bit while she watched and videoed, and I could explain what I was doing and things I was trying in real time. It worked out so nicely - I got to ride a delightful horse, and she got to see him learn from a different perspective. 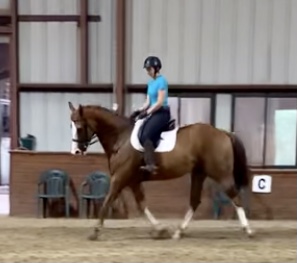 Peterson himself is SUCH a tryer. Guys. This horse is so sweet and earnest and SO BADLY wants to do the right thing, but right now at this stage in his training, he's just a little confused. He's bopping all over the place in the contact, having been ridden with very minimal feel on the reins until now, and is constantly seeking a comfortable, steady place to land. It took some good timing to be able to reward Peterson for holding the bit softly and coming up to my stable hand and body - I tried to be super clear with him when he'd gotten it right and spent a whole lot of time shouting, "Good Boy!" at him. He's also got some physical issues and old injuries to overcome, so getting him straight and forward was a big challenge. 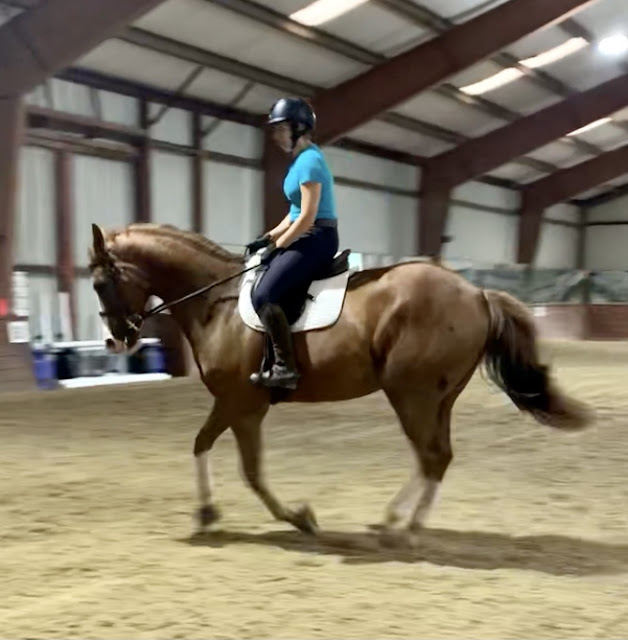 The canter, though, was the silver bullet for Peterson! Once I let him canter forward, his entire body seemed to unlock and soften, and he just flowed so beautifully over his topline to the bit! He earned so many Good Boy's! And when Peterson finally got straight and forward and connected and let me send the power from his hind legs over his back - wow that kid can MOVE! Peterson FLOATED! He is going to be such a lovely dressage horse for his mom if they keep on this positive track. I was really tickled to be able to help her out with him!

Nicky was my most recent catch ride, and without a doubt the horse most outside my comfort zone! For starters, he is ENORMOUS. He is basically an elephant. I don't know how tall he is, but it's got to be at least 17hh, and he's built like a brick house. Nicky is a big, big boy. He be huge. Did I mention this horse is LARGE, y'all?

He also has some absolutely fascinating training on him, more like a western horse than anything I've ridden since I took that one western pleasure lesson in college. His mom gave me a crash course in How To Speak Nicky before I popped on and adjusted my stirrups to allow my legs to hang as long as possible down his barrel, which was about halfway. To send him forward, tilt your pelvis down, lighten your seat, and take your leg off. If he doesn't listen, pony kick him. To slow down or stop, tilt your pelvis up and hold your abs. To turn (and homeboy can turn pretty impressively for a big dude!), twist from your seat and use your thigh to move his shoulders around. Lots of square corners are your friend to keep his hind end under him and his front end light. 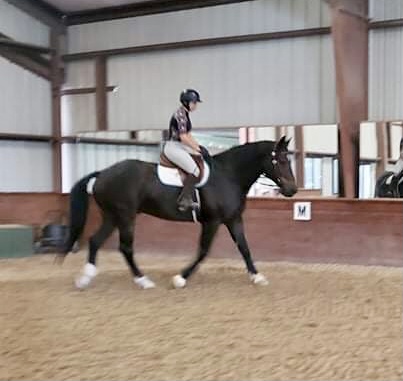 She set me loose to just play around and oh my gosh, I felt like a beginner kid! Nicky is so sweet, and steady, and lazy as all hell, so I just kind of messed around on top of his giant back trying to figure out the controls. I laughed so much - it was so fun to feel out of my element with absolutely no pressure! Eventually I got him trotting around on the bit, but could not for the life of me keep him cantering. There was so much giggling. Nicky was such a good sport for me flailing around up there like a toddler trying to figure out how to talk to him. What an incredibly tolerant, chill, sweet guy. While I don't think my next horse will be Nicky-sized, I definitely wouldn't say no to more rides on him! He was so much fun and such a good egg!

Next up, I take a lesson on probably one of the most educated horses I've ever sat on. Stay tuned!