Raising My Standards: A Lesson Recap 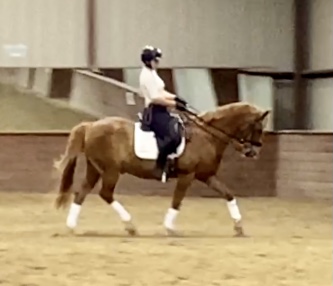 Well, at least I got to this lesson recap within the same month as the lesson! It was a GREAT one - we dug into so much good stuff, talked about show ring strategy, and got serious about upping the ante of our work. Not all of the video transferred correctly, so I don't have it to back up my memory, but I'm going to try and capture what we worked on as well as I can.

After warming up and talking about how hard it is to keep plugging away at the basics AND do all the "stuff" of Second Level on a daily basis (OMG so hard. So, so hard.), we took a look at the shoulder-in. All of our homework had paid off in a big way, and we NAILED IT. I FINALLY felt like this movement is really, really solid for us, and we were able to start making adjustments within the shoulder-in because the correct response to the aids was just there from the start. Ashley had us riding shoulder-in for several strides, and then if Dino started to lose the angle a bit, she wanted me to switch the bend and ride renvers for a few strides - so we kept the angle in relation to the rail, but challenged Dino to move his shoulders more to the inside in a different way. After practicing that a few times, we did a few mediums across the diagonal.

The big focus in the mediums was for me to keep my rein length the same, but lower and push my hands forward just about an inch as I put my leg on and lifted the front of my pelvis to ask for the medium. This gave Dino way more room to lift his withers up between my hands and really power forward through his topline without losing the uphill balance. It felt AWESOME when I got it right! 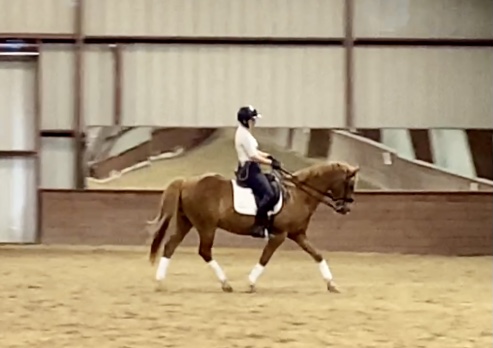 The next phase of the lesson switched from pushing forward in the medium trot to majorly increasing the collection - starting to build the serious strength we need for piaffe as well as teaching Dino how to really lower his haunches and push out of that posture. The exercise was to ride collected trot on a big circle, collect the trot as much as I could for 5 or 6 steps, walk for ONE stride, and then back to trot. Wash, rinse, repeat. This was TOUGH work but super valuable.

The exercise demanded that both Dino and I be quick, accurate, and precise in every part of every transition. I couldn't let him slow the trot and slither down into the walk - the trot steps had to maintain energy and quickness, just get smaller, Dino had to lightly sit into the walk for one step, and then energetically push back into the collected trot. It required me to raise my standards for Dino's response to the aids - he had to tuck his butt when I tucked mine, make his steps smaller when I engaged my abs, walk immediately when I asked and then trot off - with enthusiasm! - when I put my leg on and lifted my seat in that single walk stride.

The very few times I really got it - the feeling of tucking Dino's haunches under and getting him bouncing under my seat before the powerful push back forward - it was super cool, but man it was difficult! Just coordinating my aids correctly was a huge challenge. As Ashley said in our lesson, this exercise is going to become "my life" for the forseeable future, and we are definitely going to need to practice this A LOT.

Next on the list was taking a look at the canter pattern from 2-1. You know, the bane of my existence in every dressage test ever from the beginning of time. After riding it in front of Ashley once or twice, she diagnosed our issues as stemming from not having enough impulsion in the stride right after the canter depart. While the walk-canter transition itself isn't bad, literally in the NEXT STRIDE Dino loses energy and impulsion. So, without enough energy, the medium canter is flat, on the forehand, and lackluster, and when I ask for collected canter before the corner, I've got no balance and no impulsion left to work with, so we get some kind of ugly, strung-out canter that's REALLY difficult to ride a 10m circle in, or he breaks to trot because there's no energy, and the balance is really poor. After that kind of a disaster, it's just damage control going across the diagonal for the counter-canter.

So. We needed MORE CANTER!

Ashley had me pick up the canter from the walk at the top of the ring, just like in the test, and then in the stride AFTER the canter depart, boot Dino with my outside leg and get him galloping for all I was worth. The idea is to train him that EVERY time we pick up the canter, we are GOING FORWARD in a serious way. I want TOO MUCH CANTER! 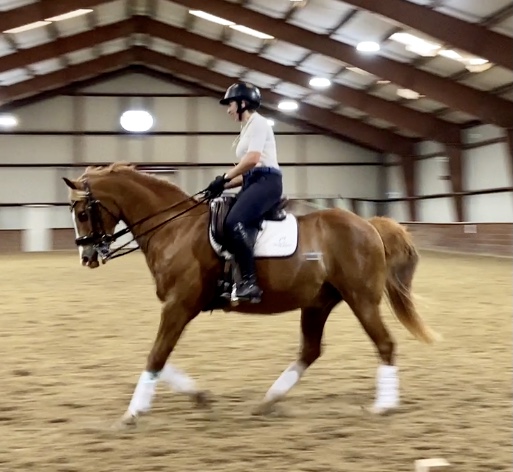 Once we got Dino past the, "Oh, shoot, she is SERIOUS!" portion of this work, we started asking for more in the transition from energetic collected canter to big, rolling medium canter. The goal was for me to just touch him with the outside leg, not even squeezing, and push my hands forward an inch, and for that to give me a huge response and a BIG canter.

Guys. We got this one right and it was freakin' AWESOME. I WISH the video had come through, because it was easily the BEST canter I have ever gotten from Dino, ever. The feeling of elevation in his front end was amazing! With more energy in the canter than I needed, it was so EASY to shape it. Whether I wanted medium or collected canter, or adjusting the straightness, or counter canter, all the buttons were right at my fingertips when Dino was propelling his own self energetically forward in the canter. That kind of big energy and hair-trigger responsiveness was what we'd been missing in the canter work all along.

When I got anything less than a really enthusiastic, expressive, super-forward response, Ashley would comment with, "Well. I mean it's fine. But it's not as good as you can do, " or, "I mean, I'd be thrilled with that canter a year ago, but now it's not good enough." She really raised the bar on the canter work in this session and what used to be acceptable isn't anymore. Being challenged for a bigger, more responsive, more expressive canter with a LOT more impulsion also showed me that Dino is easily capable of a lot more than I'm asking for - he just needs to know that's what I want! 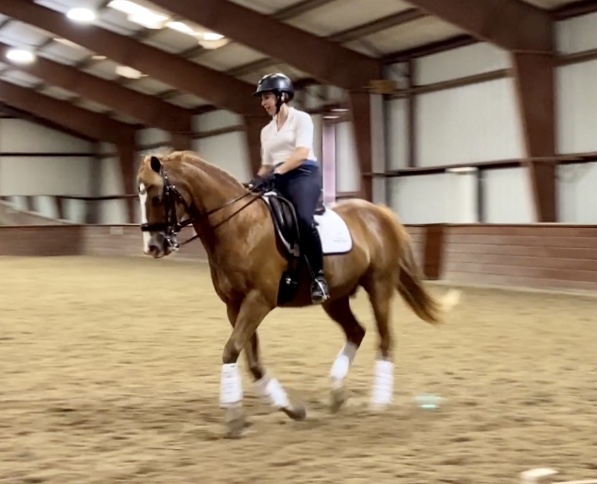 We ended the lesson with some show-ring strategy, starting with how I approach the first centerline and halt in a test. Ashley's suspicion was that I start to lose Dino's attention right in that first halt, and then the entire test devolves from there.

So, we practiced centerlines. The centerline and halt itself for us is usually pretty spot-on, but it's when I ask Dino to trot off that I find he's totally checked out. Ashley had me ride a centerline, halt, and then just sit there for way longer than the required three seconds. She had me eventually ask Dino to trot off with one soft, quiet, squeeze-release of my calves, and if he didn't shoot off immediately, he got the Pony Club Kick. The idea was to train him to remain attentive in the halt no matter how long it was, and to anticipate that we were going to trot off - with feeling! - at any moment.

After a few repetitions Dino caught on, and I had a much more attentive pony before, during, and after the longer halt! With this renewed energy and mental focus, I could also shape his attention and balance with half halts MUCH easier as I came around the first corner in preparation for the first medium trot. It turns out that more impulsion - and easy access to said impulsion - was what I needed in literally every aspect of my ride. 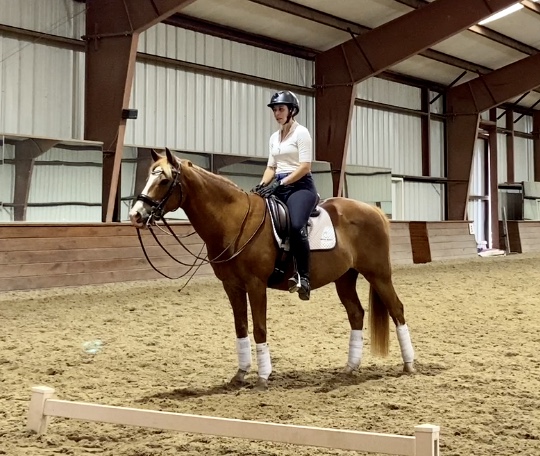 Overall thoughts and homework include:

This lesson was so enervating and really had me excited to show again the week after - I felt like I had the tools I needed to really improve my scores this time around and was eager to put it all to the test! It also showed me that we CAN perform to a new and higher standard - we aren't topping out yet by any means, and I am so ready to keep putting in the work.
Email Post