A Trip In the Wayback Machine: Rhythm & Blues 2 Show Recap 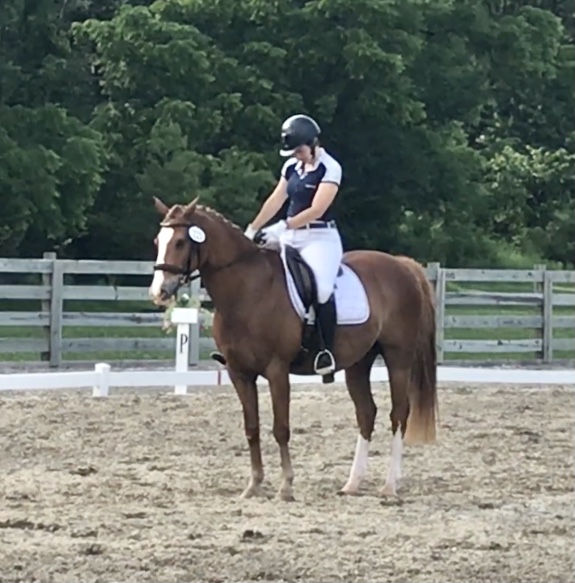 I am very slowly getting through my backlog of updates, which brings us to our June show at the very lovely Rhythm & Blues Equestrian Center! This was technically our second show of the season - in May I had entered a schooling show to knock the rust off and run through 2-1 in an actual regulation sized dressage court before doing anything rated. It was an abject disaster. I was inexplicably SO nervous and tense, Dino was totally checked out, my reins were SO DAMN LONG the entire test, and it was just ugly ugly ugly. We ended up scoring a demoralizing 54% and change, and I left that show with my tail between my legs, though I knew most of the problem was me and my tension and inability to, you know, ride the horse.

While the risk-averse part of me wanted to enter fifteen more schooling shows before throwing money at rated competition, the reality was that time wasn't slowing down for me, and if I wanted to finish my 1st and 2nd level bronze scores this year, I needed to get cracking. So, buoyed by some good lessons (during which Ashley reminded me of such things as "shorten your reins" and "the pony needs to go forward when you put your leg on") I entered Rhythm & Blues.

By the time show day rolled around I was, dare I say, excited! Dino had been going super in schooling and lessons, I had two amazing friends coming to groom for me (shout out to Becky and Chris, you ladies are superstars!), and I got to dress up Dino and myself and go ride some tests at a gorgeous facility. What's not to love?!

I rode 2-1 first, and I can't decide whether I like riding the harder test first or not. On the plus side, Dino was fresh, on the other, I hadn't gotten my "OMG WE'RE AT A HORSE SHOW!" paralysis over with yet. Despite the usual show ring butterflies, I was SO much more relaxed at this show than I had been at the schooling show the month prior. Dino warmed up pretty well - not as on the aids as I would have liked, and I still need to figure out how to get him more "on" in the limited timeframe of the warm up, but he felt pretty good in his body overall.

We started strong with a 7 on our first centerline and halt, and then went on to get a smattering of 6's, 6.5's, 5.5's, 5's and two well-deserved 4's in the canter work where Dino tripped and broke - TWICE! - because I let him get too strung out and on the forehand, and when I asked for more collection and/or counter canter, there just wasn't the balance and push available to get the job done. I had a hard time really using my corners to set us up well for the movements, and I was just hanging on for dear life a bit throughout the whole test instead of riding actively. Dino wasn't truly in front of my leg or on the aids, and it really showed! We scored a very fair 57.9%, and while it was a bit disappointing to once again miss out on a bronze score, I completely agreed with the judge's assessment. 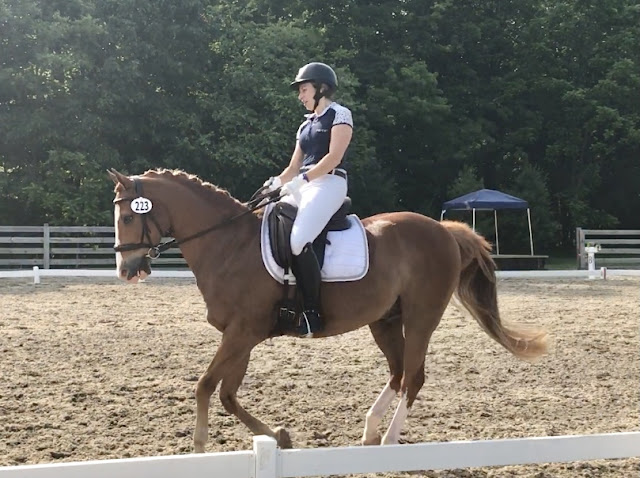 I was determined to have a better test in 1-2, and did my best to jazz Dino up in the warm up before heading back into the ring. He felt PHENOMENAL down centerline - I was giggling! - but then the test sort of devolved from there after the first halt. He kind of just checked out and we barely coasted through the rest of the test, scoring more consistent 6.5's and 7's on most movements, but again with the 4's for breaking in the canter work. (WHEN will this stop being a problem for me at shows?! WHEN???) Overall it was a less frantic, more pleasant test, and we got our qualifying score! 62.5% puts the finishing touch on our 1st Level scores, even though it wasn't the 65%+ I really hoped for.

Despite the mediocre scores, I had SO MUCH FUN at this show. It was an absolute delight to take Dino out to a beautiful venue with great friends and do our thing. I was relaxed, I had a great time, and I was able to think in the show ring way more than at the schooling show. The more "fancy" rated shows I go to, the less intimidated I am by them. The vast majority of competitors are just like me - amateurs struggling along with average horses just doing their best and having fun. I don't feel out-classed or out-horsed, and rated shows now feel like a place where I belong, too, even if we're not winning anything! 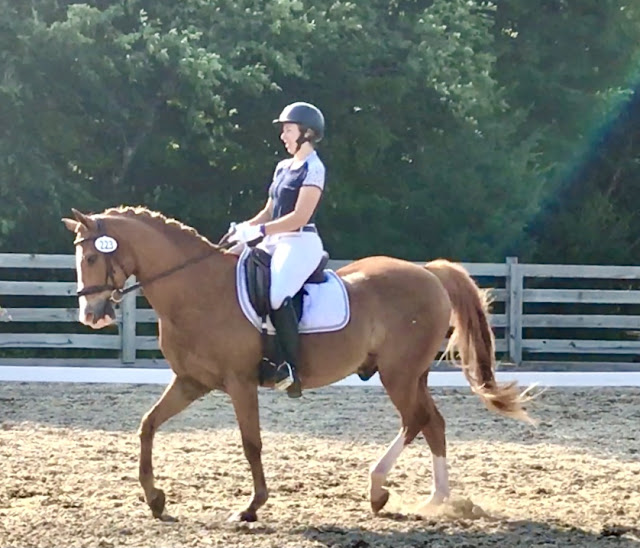 I'm sure I've said this before, but guys, 2nd Level is freakin' HARD. It's so hard, and now that I've really dug into it this past year and shown 2-1 a few times since we got Dino sound again last summer, I am forming a new appreciation for just how difficult this level is. In 1st Level, there are lots of places in the tests where you get a little break - a spot to take a breath, re-compose yourself, adjust what needs to be adjusted, and get ready for the next movement. In 2nd Level, you don't get that anymore. There are NO breaks, you have to be ON, the horse has to be ON, and you have to be SUPER ON IT for the entire 6 minute test. The kind of somewhat mentally-absent show ring riding and only semi-reliable responses from Dino that got me through Training and First just don't cut it anymore at Second, and I am feeling it! It's changed the way I've looked at schooling over the past month or so - the quality of work and responsiveness that I've been happy with from Dino just isn't good enough for the level, and I'm finding myself really motivated to raise my standards in my riding and what I think of as "acceptable" for both of us. 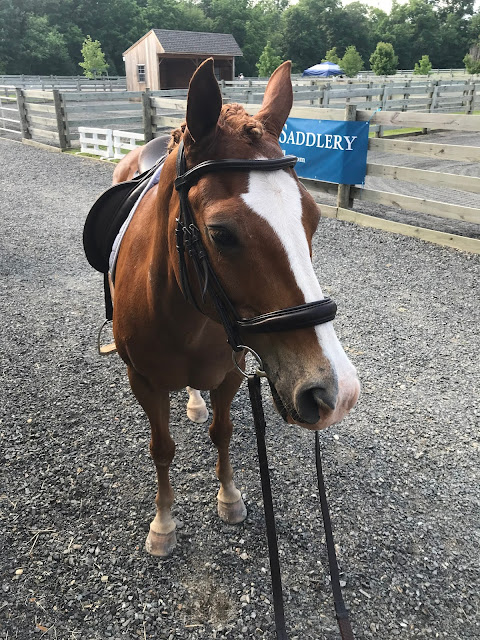 This show was such fun, and clearly gave us LOTS to work on in our next lesson in preparation for the rest of the competition season. It would inform my focus for the next few weeks - namely getting Dino more hot to the aids and keeping him focused, attentive, and ready for whatever's next! Stay tuned for more educational fun as we dig into our July lesson in an upcoming post. 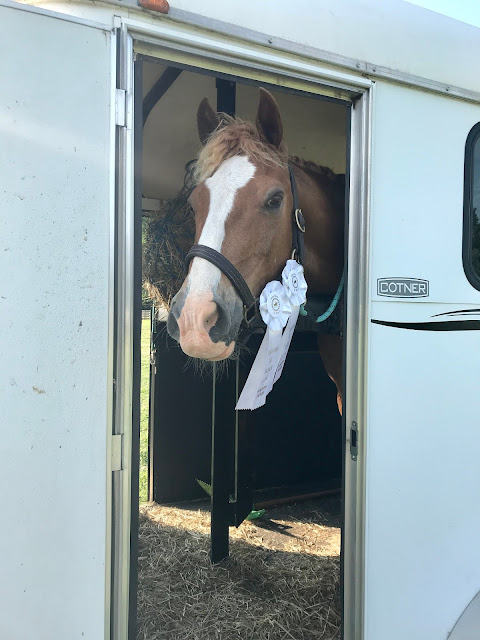