As I mentioned briefly, our last couple lessons this fall were a bit of a step back to the basics of connection and making sure that Dino's response to my leg aids was consistent and immediate. I'd been having trouble getting him off my right leg (really, off his right shoulder), as well as getting and keeping him round and through his entire topline. In our October lesson, we worked a lot on back-and-forth between the gaits, using the little space where the horse softens to change gaits as an opportunity to ask for more engagement. We also spent a good long time working on the bane of my existence, the canter-walk transition.

As you can see from the GIFs in this post, we got it right part of the time!

But more valuable than getting it right a few times was the understanding that came to me during my schooling rides after this lesson that the reason I struggle so much with the canter-walk is that the collected canter is not self-sustaining. I am doing so much to manufacture and maintain the collected canter that there is no more that I can do with my aids to ask for a walk transition. My holding and driving-under aids are already maxed out just keeping the collected canter going, so there is no clear point of release or softness from where I can ask for the walk. (or work towards a pirouette canter!)

That being said, one of the things I really want to try and work on this winter is making the collected canter self-sustaining enough that I can put Dino into it, leave him alone, and expect him to continue on in collected canter without me bodily holding him together. This of course is going to take a lot of strength building for him and a lot of discipline for me, so it will be a bit of a slow process, but one I'm confident will vastly improve the canter work.

We also worked quite a bit on canter-trot-canter transitions in October, asking for more impulsion and engagement as Dino's body softened into the new gait. This helped a TON with his balance, throughness, and freedom in both gaits. He offered some truly spectacular trot during this exercise, and it's one I have continued to use in schooling. It's an easy, not terribly mentally taxing way for me to work on Dino's strength and the quality of the gaits, as well as my own timing. 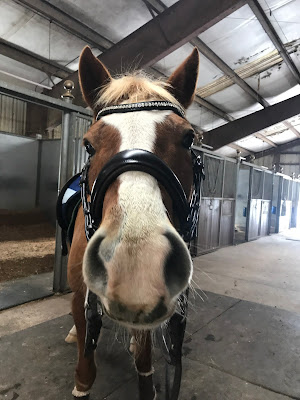 In November our focus turned more towards the lateral work, specifically shoulder-in and leg yield. I had fallen into the habit of riding the shoulder-in with too much bend and not enough angle, so we spent a lot of time just working on correct alignment in this movement. Dino was having some trouble with just keeping the right body position in shoulder-in, especially going left, so we used a leg yield off the rail out of the shoulder-in to reinforce what I wanted him to do with his shoulder.

It was tough work, but SO effective in correcting the alignment and establishing the bend and lateral movement from the positioning of my leg and seat. I've been playing with this exercise in schooling as well, and it works very nicely with the shoulder-in/renvers exercise we used in September. 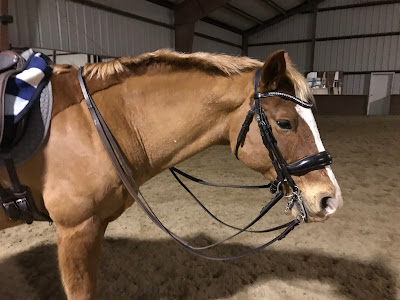 Going hand-in-hand with the lateral work is getting Dino to stand up more through his shoulders, especially the right one. He loooooves to just lean in on that right shoulder, which he has for years, but now that we are asking more of him in the lateral work and collection, it's incredibly apparent. Getting Dino's shoulders to move up and away from my inside thigh has been the bread and butter of my schooling over the past few weeks, and it's AMAZING how much more accessible his body is when his shoulder isn't blocking him! It's been a huge help with his overall alignment, the lateral work, and the collection.

Another thing I've been working on in this same vein is using a counter-yield in canter to align Dino's body. It helps SO MUCH to get his shoulders out of the way, resulting in a much more balanced, through canter. If Dino's body is aligned, his energy isn't blocked, and as a team we have access to so much more power and flexibility. I have a feeling the name of the game for the rest of the winter is going to be ALIGNMENT!