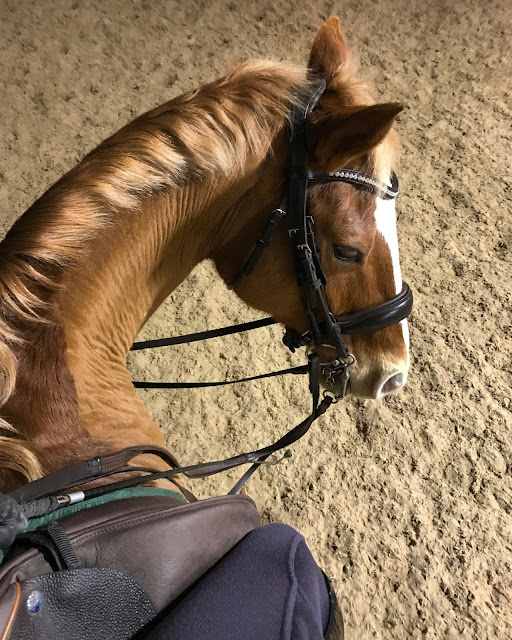 My two-month break from blogging wasn't exactly intended, and I did have a lot of things to write about, but I just.. didn't.

Maybe the exhaustion of living through 2020 finally caught up with me, but I couldn't quite find the motivation or the heart or the time or the inspiration to write over the last two months. But, I'm back! I always come back.

We did do a lot while I was away from the blogosphere, though! We had two lessons, one in October and one in November, before Ashley left the frozen north to head to Florida for the winter. The cold and dark inspired me to bust out the neck rope for some tackless riding again, which is now just so much fun with all of the dressage buttons I've installed! We took a little time off here and there, we went on a trail ride, and as always kept plugging away at the training, trying to get that 2nd Level work really solid.

There were things that didn't work out, too, as is par for the course in 2020. I had big plans to take Dino down for a training bootcamp at Riveredge - three days of total dressage immersion for both of us, with our best friends by our side for a Dressage Queen weekend extravaganza! However, right before we were supposed to head down, COVID-related restrictions ramped up in both PA and MD, including requirements to have a negative test before entering both states. Logistically, it just wouldn't work, and once our group was honest with each other about it, we confessed that the whole idea of the trip had been making us all nervous as we watched case numbers in our area climb. So we cancelled the weekend, to everyone's great disappointment. Hopefully we will be able to make it happen this spring or summer - I have my fingers crossed that I'll get a vaccine for my birthday next year!

Training has, naturally, had its ups and downs over the past two months as well. I really struggled with the connection and achieving an uphill balance during our most recent lessons, and the one comment from Ashley that has just been stuck in my brain on repeat is, "It shouldn't take a full circle for you to get him rounder." I had lost the light, fluffy, soft, lifted feeling in Dino's neck and wither, and the way I was riding didn't seem to help the problem at all. The connection honestly sucked, I was really frustrated, and it took me both lessons and some thoughtful riding on my own to figure out why.

Since starting in the double, I had gone from totally afraid to touch the reins to TOO far in the other direction, riding with a far heavier hand than was necessary as well as extremely rigid arms. It was a problem in both bridles, to be honest. Dino was clearly NOT a fan, and our rides were starting to devolve into a tense, rigid mess. So, I quickly demoted myself back to riding only in the snaffle bridle once I realized the connection was going to hell in a handbasket until I was able to work things out.

Another great Ashley tidbit - "You should be giving when his head goes down in the walk," helped me re-establish a soft, following hand, and a lift through Dino's withers in response. I had essentially totally blocked Dino's energy with my tight arms, and it was sucking the life out of him! After spending some time focusing on the moment of giving, keeping my elbows soft, lats engaged, and aids clear, I'm happy to say the connection is back to the glorious, fluffy, buzzy, playful thing it was before I started riding with an unholy death grip on the reins. I let myself swap back to the double for a couple rides each week, and over the past week or so Dino and I have both been having an absolute BLAST in our work! His whole attitude has been so cheerful and enthusiastic, and he feels really strong and wonderful in his body. We're digging into more collected work again after we took a week or so off earlier in the month, and Dino just feels so so good, and like he's really enjoying using his body in this way again.

I'm hoping to get some more detailed thoughts down about what we've been working on, things that I've learned over the past two months, and more media since Greatest Husband Ever got me a Pivo for Christmas! So, stay tuned for way more media of me actually on the pony instead of just his incredibly cute face, as well as my usual musings on riding and training.