I still have no photos from the GMO's photographer who was shooting the show, but I'm posting this recap anyway. My blog, my rules!

While our scores were certainly nothing to write home about (those lovely ribbons are my last place prizes in two very small classes), it was a great learning experience, I enjoyed getting back in the show ring, and I now have LOTS of things to work on for next time, whenever that may be!

Dino and I were the very first people to arrive at the show grounds about an hour and a half before our first test. Not even the show secretary was there. I was still very much in eventerland "MUST ARRIVE AT LEAST TWO HOURS PRIOR TO DRESSAGE" mode, and consequently spent some time napping in my truck before I even needed to start thinking about tacking up and getting on. Next time, I won't get up at 4am to hustle my butt to a schooling dressage show.

My biggest anxiety going into this show was remembering the tests. The First Level tests are a lot longer than the BN tests that I did all last year, and I was really nervous that I'd forget something in the heat of the moment when the show nerves kicked in. As I looked over at the large arena, I also realized that I hadn't practiced riding a test in a space that big since... probably 2016. Part of me feared that both my pony and I would die of exhaustion near the end of the canter work.

I was also not entirely sure about the size of the 15m canter circles, or exactly how far the 10m half circles were supposed to extend, though I had a fair idea. I was hoping to watch the rider before me (I had the second ride of the day) and look for their tracks in the footing.

And then the rider before me scratched, and Dino and I were the first ones down centerline that day. HOORAY.

The only thing I didn't like about the facility where this show was held was that warmup was in an indoor arena, with no space outside on the grass to school instead. I'm sure for 99% of the population this isn't an issue, but for a pony who really, really hates the indoor, the setup made it very challenging for me to get Dino as hot off the leg as I needed him to be.

But I did the best I could and headed out to the ring for our first crack at First.

I jazzed Dino up during our tour around the outside, blasting forward in a lengthened canter before reeling him back in to enter at A.

And my brain promptly went directly into a fit of internal screaming throughout most of the test. While I DID somehow remember the entire thing, it wasn't very pretty. I had underestimated how LONG the test was and just how much more on the aids Dino needed to be. Thankfully we had all new problems instead of the age-old late canter departs we've been battling forever, but this test definitely left me with a lot to work on!

Dino broke gait a couple times in the canter work, again due to my own anxiousness and underestimation of how forward he needed to be, garnering us a handful of 4's on those movements and the subsequent trot transition, which didn't really exist since we were already trotting before we even got to A. The canter and trot lengthenings were there, but not as much as they could have been, and we over-shot centerline on a half-circle or two. The stretch circle/free walk were okay, again not as great as they are at home due to my own tension bleeding over into my riding. I don't remember if I breathed or held my hands up during this first test, I was just concentrating on survival! 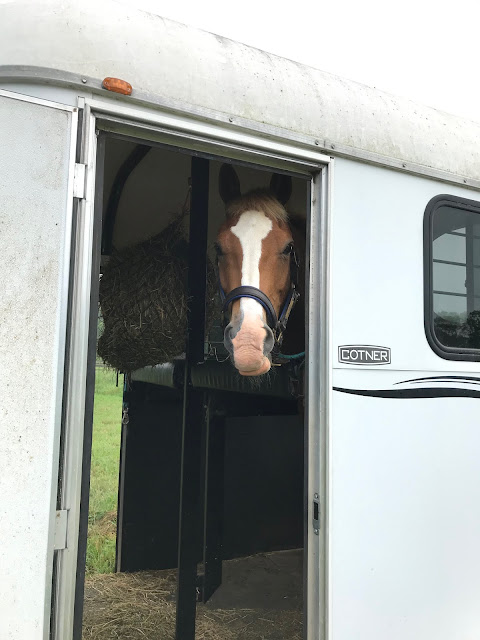 Our scores in this test ranged from the 4's for breaking gait to a 7.5 for our medium walk, but hovered mostly in the 5.5-6.5 range for most movements. I thought the scoring was very fair given our frantic, tense performance, and the judge was kind enough to share some advice with me after the test. She advised me to correct mistakes right away instead of giving up and coasting through to the next movement, which would at least save my score for the following movement instead of losing out on two scores. This is a thing that I know, but it was good to be reminded. But, overall, I just needed a whole lot MORE. More forward, more on the aids, more difference and ground cover in the lengthenings, more stretch in the free walk and stretch circle. We ended up with a score of 58.7%, which I thought was fairly earned. With that in mind, I made my plan for Test 2.

Our next test, even though it was the one I was initially more worried about, was a VAST improvement! We started off with a bang earning an 8 on the centerline, and racked up a lot more 6.5's and 7's on most movements. I only got one 4 for breaking at the end of the first canter lengthening, but overall everything was much, much better. The first leg yield was very crooked (5.5) but I fixed that in the second one to improve our score to a 6.5. The judge again wanted to see MORE in the lengthenings and stretch movements, but she rewarded me for the improvements I made both in the scores for the individual movements and in the collectives, bringing us up several points to earn a 62.3% on Test 2! When I spoke with her at the end of that test I happily exclaimed, "That was SO MUCH BETTER!" and she grinned and replied, "Yes it was! Nice job fixing those things we talked about in the first test!" The whole day was totally worth it just for that exchange - I have a way better idea of what I need to improve on to really confirm our skills at First. 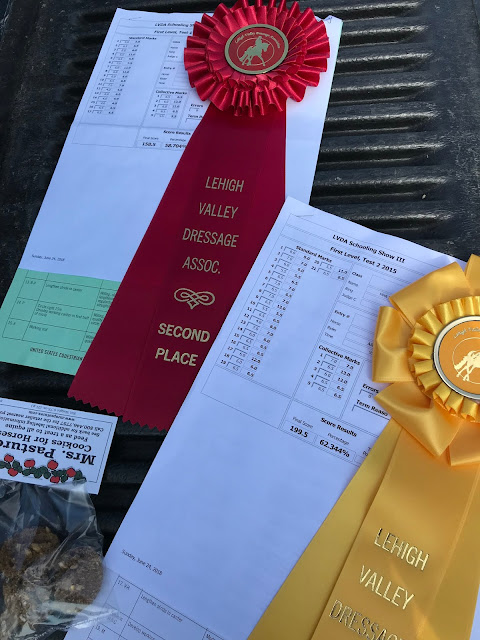 While Dino and I were absolutely not as prepared as we could have been for this show, I'm really glad I just threw caution to the wind and went for it anyway. While our rides weren't impressive by any means, I had fun, and the excellent judging was as good as a lesson in teaching me what we need to be successful at this level. First Level has been a goal I thought I might never achieve with Dino, so it feels good to have just gone in there and done it, and gotten a score over 60%! I'll be able to work diligently for MORE in every movement and making sure that Dino is hot off the leg and as on the aids as I can get him before we make our next trip into the show ring. 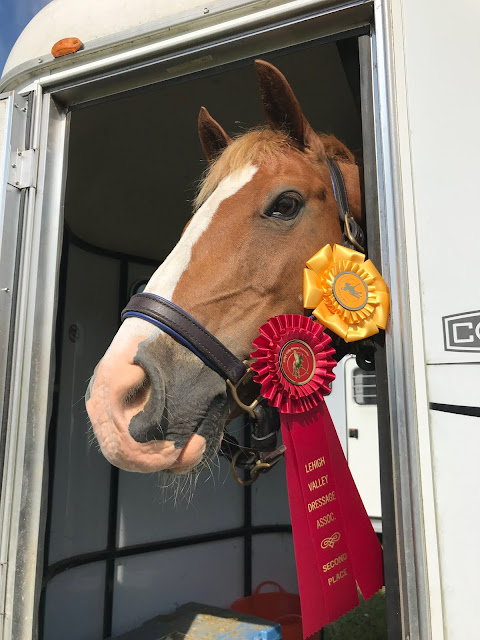 Now it's time for some body work and saddle adjustment before we hit centerline again in the fall!
Email Post
Labels: dressage showing