Jumping Our Way To Better Dressage 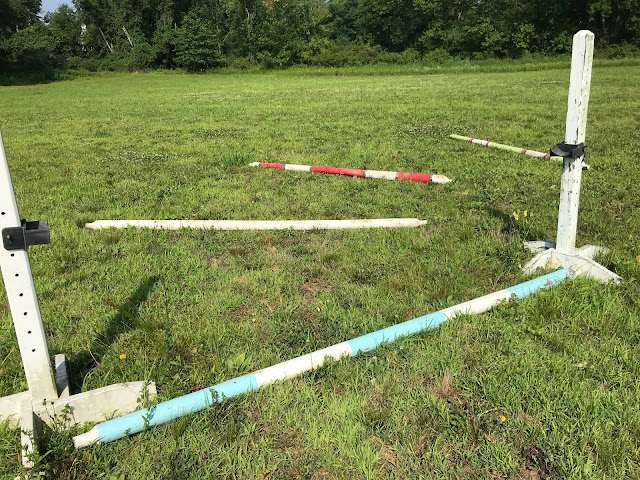 If you haven't already figured it out, my trainer is a really smart woman.

During our last lesson, what seems like many moons ago, we worked on a low-but-mentally-challenging jumping exercise with the aim of improving the flatwork. This is a bit of an opposite tack from the usual flatwork-improves-jumping mindset I'm used to, and to be honest I wasn't entirely faithful in doing the homework I was given of working more with cavaletti, poles, and small jumps in our flatwork at home.

Mostly because I'm lazy, and where are jumps are this year requires me to either walk up and down a really steep hill on foot to set fences and/or ride down and get on and off my pony several times while trying to make sure he doesn't wander away into the forest or pull me over while trying to eat everything.

It's not my favorite.

But at some point after the dressage show, the sweet French exchange student who's been riding with us this summer set up a series of trot poles with a chute to encourage straightness, as well as a series of poles on a tight curve that could be ridden at walk, trot, or canter depending on how close to the outer edge you rode. She had also slightly modified the grid I had built prior, which I further modified into a trot pole to a cavaletti bounce, one stride to a cross rail, to two canter poles. 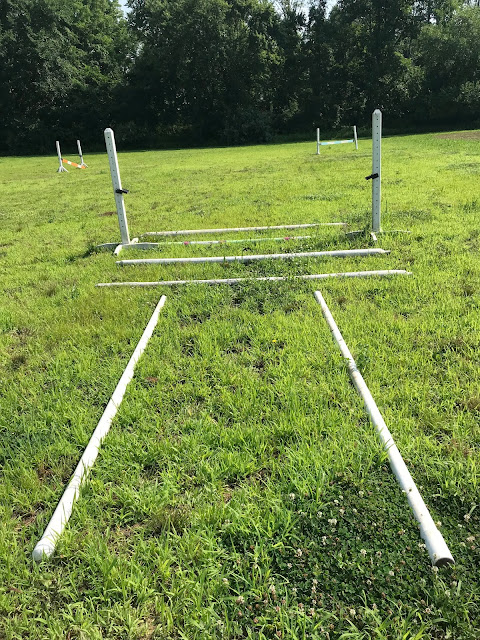 So, in the spirit of "mixing it up" for Dino and not really intending to seriously school any flatwork, we had at it over all of those exercises, throwing in precise transitions in between elements.

Aaaand it really improved the flatwork.

Going through the poles themselves helped Dino work through over his topline, stretching down into the bridle and really using his back well. Having the various exercises to think about engaged his devious pony brain, keeping him interested in the work. He especially LOVED the little grid, which did wonders in getting Dino moving very forward and tucking his hind end underneath him, giving me a great canter to work with. Adding in precise transitions in specific places in the field helped me capture the sharpness off the aids that I was lacking in our dressage tests, and using these tools gave me an overall quicker, more rideable, more focused pony. 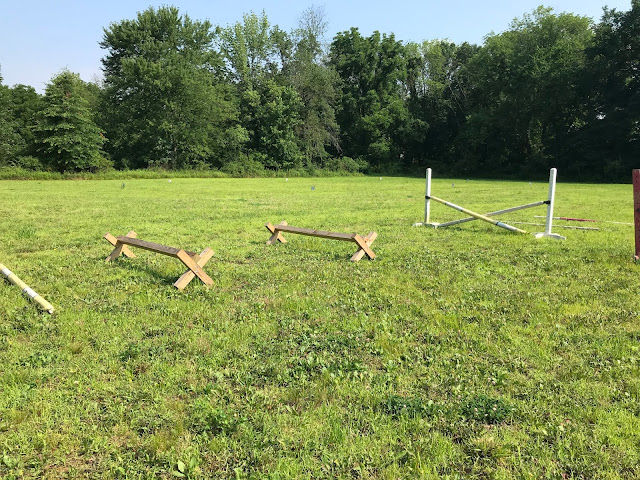 This ride was encouraging in that it showed me that everything we need to improve our scores at First is in there, it's just a matter of finding the right tools to unlock it all! Now, the next task will be to figure out how to harness the energy, focus, and precision that Dino offers over these poles and small jumps when we're in the dressage court without any obstacles in sight.

Who would have ever thought that cross training actually works?