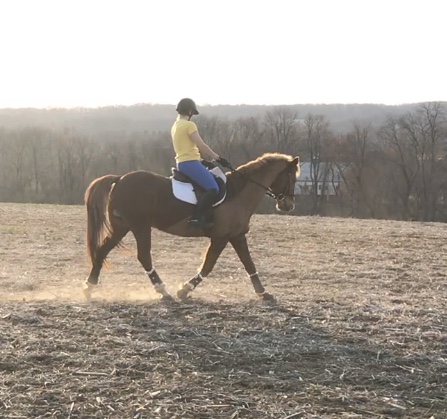 Spring is finally making an appearance here in Pennsylvania, if only for a day or two at a time. Last Friday it was gloriously warm and sunny, and my delightful husband offered to come hang at the barn with me and take some video. He's just the best.

After watching the video, I have to say that I'm quite pleased with how Dino is going at this point in the season after not working seriously since approximately October. He felt great, he looks great, and I feel like my First Level goals for 2018 are not quite as unattainable as I thought they once were. Instead of just hoping not to embarrass myself at Training, I find myself thinking that First seems downright doable.

As the years go on, springtime with Dino gets better and better. For a very long time, spring was a time I dreaded. Nearly every ride would be a fight about going forward, and Dino never took well to having to end his winter break and get back to work. But now? Now he's happy and forward, and though I still carry a whip and wear spurs almost every day, most days I rarely use them.

Friday was no exception, and after having a short canter up a big hill, Dino was ready to rock and roll. He started the ride nicely forward and pushing into the bridle, and as I schooled transitions and circles and changes of direction, Dino stepped up his game and got more and more uphill and round as we went.
While the transitions weren't always as round as I'd like, and my position definitely left some things to be desired (omg LOOK UP and get yo' leg underneath you, girl), there were some truly fabulous moments in there, too! I just can't believe how Dino keeps getting better and better every year. He's coming 20 in May, and I may be biased, but I think he looks freakin' PHENOMENAL.

These video clips are also rekindling the idea of getting a dressage saddle, so if anyone has one they wanna give me for free or any effective bank-robbing strategies, hit me up.

At the end of our ride, I rewarded Dino for all of his fantastic flatwork with a couple jumps over the little coop. He was, to put it lightly, enthusiastic about it. My trainer will be thrilled that I embraced the long spot without peeing my britches. I think we're going to have a blast XC schooling and hunter pacing this year!

Friday's ride leaves me feeling optimistic and more motivated than I've felt in a long time to keep working towards my goals for this year. The weather and Dino's inability to keep his shoes on over the past month and a half was defeating, to say the least, but after being able to get such good work from my pony after so little real training is incredibly encouraging. With a little sunshine and my pony feeling so good, things are looking up!
SaveSaveSaveSaveSaveSave
SaveSave
Email Post
Labels: dressage