PONY'TUDE Goes To An Event Derby 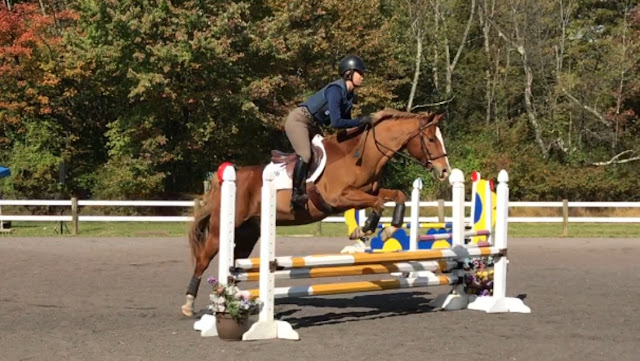 In continuation of my small steps towards regaining my general badassery over fences, over the weekend Dino and I competed in an event derby at a local barn.

I was SUPER excited for this event as a schooling opportunity for my screwy brain. Levels from ground poles through Training were offered, and once you completed your first round at a certain height, you could ride unlimited unjudged clear rounds for $5 each. The atmosphere was very casual, very fun, and very encouraging, with competitors cheering each other on after a rider got their horse over a spooky obstacle after a refusal, got back on after a fall, or completed a nice round.

This derby was essentially EXACTLY what I needed.

I entered the 2' and 2'3 classes, my intention being to give myself some confidence-boosting rounds over fences that I knew were well within my skill set, and that my pony could probably jump blindfolded and backwards with a monkey on his back. When my nerves kicked in the day before the show, complete with vivid visualizations of refusals, nausea, and a fluttering heart, I was glad I had made the decision to 'dumb it down' for myself instead of trying to test my mental and emotional fortitude with a 2'6 round.

Tacking up at the trailer on the day of the show, I muttered to myself like a crazy person.

"You can do this. You are awesome. This is going to be FUN. YOU JUMP PONIES FOR FUN. You got this. You're not going to die. These jumps are tiny."

My butterfly was having a freakin' field day, and all I could envision was freezing up on course, panicking and pulling at the base of every fence, and not being able to breathe.

So, I made myself breathe. As best I could, I pushed all of the negative thoughts out of my mind and started my warm up, focusing on riding the pony under me and getting Dino moving forward as best I could. While the warm-up area was a bit small and the grass a little slippery, I got us as close to the Magic Gallop as I could, and headed towards the crossrail.

I jumped the vertical off both leads. Dino pricked his ears and hopped over without question, moving up to the distance each time.

The (very, very small) oxer was freaking me out, but I knew I had to jump that thing. Forward canter, leg on, ride straight, count the strides, ride the rhythm. One, two, three, four, five, up and over, easy as pie. Again, off the other lead, we jumped the oxer. Dino saw the distance from a mile away and took me right to it.

I breathed. Time to go show.

The fences in the 2' division looked blessedly tiny, and the XC jumps were definitely well within my comfort zone. Dino was a bit sticky to begin the course, and I was nervous, but I cowboyed him up and over the first stadium fence. Fence 2 looked "bigger" than the others, even though it wasn't, and I caught myself staring at it, taking my leg off, and searching frantically for a distance instead of riding forward out of the OK canter that I had. Dino, ever helpful in pointing out my mistakes, declined to jump.

However, I knew that the stop was 100% my fault, and I knew what I had to do to correct it, so I just turned right around and popped over the jump from a trot. After that, the rest of the course was smooth sailing! While I was absolutely reverting to my heavy backseat-driving, long-reined let's-just-get-out-of-here-alive riding style, I was able to totally move on and jump the rest of the course clean, even the XC portions, jumping out of the ring, AND riding back into the ring for the last third of the course. 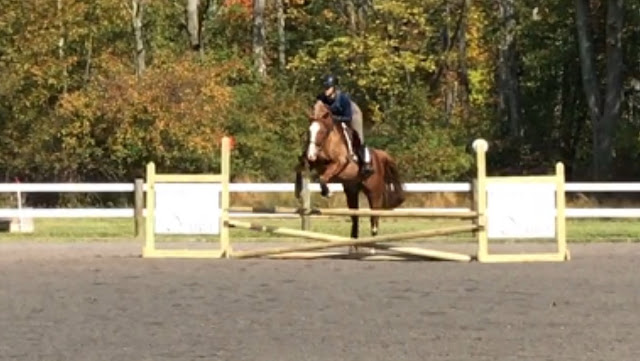 I decided to do another round at 2', just to really reinforce a bolder ride on my behalf and get super comfortable with the course before my next class. While there was a lot of trotting (grouchy pony did not want to go right back in the ring again!) we jumped clear and had a super, forward pace going by the end of the course. I was more than happy with it, and I was having FUN!

We had a bit of a break before the 2'3 class, and while I was a little apprehensive about the bigger XC fences in this round, surviving the 2' had given me a huge confidence boost.

The course had a sticky beginning, with Dino not being so keen about having to go and do this AGAIN, but I was committed to getting over those jumps, and once we cleared Fence 1 he was ready to roll! The first SJ portion of the course was awesome, and we broke down to the trot to jump the hay bale jump out of the arena towards the XC jumps outside the ring. I had been nervous about the larger, skinny coop that was the first XC fence for the 2'3 class, but I committed to the ride and Dino did just what I asked and jumped it handily. We were rocking and rolling through the XC portion until the last outside jump - a wide rolltop that looked MUCH larger than its smaller counterpart that I had jumped in the 2' course. I hemmed and hawed and tried to stare down a distance, wondering if I could fit one more stride in instead of just rolling with our good, forward pace and taking the long one.

Dino was not impressed with my riding, and once again told me that I had messed up by refusing the fence.

But, again, I knew EXACTLY what I had done wrong and was able to recover instantly, turning around and handily jumping the rolltop, going on to finish the course well without any other problems, even easily jumping the big black pipe that I thought Dino might spook at. Despite the stop, I felt VERY successful!

To top off my day, not only did I get a blue "Clear Round" ribbon, but the rounds were scored such that all penalties were converted to time faults, and compared to the optimum time for each course. We ended up 4th out of 16 in the 2', and 6th out of around 10 or so in the 2'3!

I had fun, I got to improve my confidence, AND I got to take home satin. What more can one ask for on a show day!?

Even better is that I know exactly what mistakes I made and where I can improve, and I know for sure that I need to be able to consistently achieve my Magic Gallop in the show ring before thinking about moving back up to BN. That's a concrete goal I can definitely shoot for! This show also marked the first competitive event since May that I've ridden in and completed with less than two refusals in any one course, and that's something I can get excited about! I'm also absolutely thrilled that Dino was so on point in this derby - he may not have been 100% enthusiastic, but he was completely honest and when I asked him to jump, he jumped. I really couldn't be happier with how the day went!

One small step for Team PONY'TUDE, one giant leap for my demented brain. 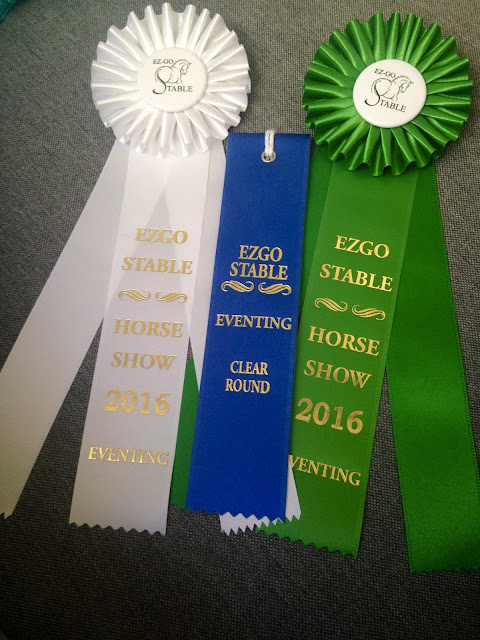