Soft, Straight, Round: A Lesson Recap

When my trainer asked me what I wanted to do in our lesson this Saturday morning and if I wanted to jump, my response was an ambivalent, "Sure? Why not? We need help with everything!" Which is true. All three phases need some serious work. I was game to work on whatever issues she happened to see crop up that day.

Well, we never got to the jumping, but we did some really fantastic flatwork that was sorely needed.

I had mentioned to my trainer earlier in the week that I wanted to work on helping Dino stretch over and through his back more in the dressage. At shows especially, I tend to clamp down with my leg and get tight in my seat, all the while being over-active with my forward aids which ends up blocking him and creating tension instead of sending him forward in a relaxed manner. I've also had a really hard time getting Dino straight lately, especially to the left, wanting to pull and push him around to get the bend and get him off my inside leg, which is not helpful! I'd had some success using the techniques from our last dressage lesson to start allowing the bend a bit more, but he still felt stuck.

At the walk, my trainer had me drop my stirrups and just feel the movement of Dino's back, letting him move me instead of me trying to MAKE him go. I practiced "injecting" and "taking away" energy from the walk using this more passive seat, and started to feel how following the motion was getting me a much better, more prompt and relaxed response than a big seat and leg aid. Dino adjusted his pace when I asked, and kept his back fairly soft in the process.

Using the same concepts, we moved up to sitting trot without stirrups, not making a big deal out of the upward transition, and using the mental image of bouncing with the motion of a trampoline to help me maintain a soft, following seat. Within the trot, we did a lot of circles and changes of direction, focusing on maintaining Dino's relaxation and beginning to take up more contact as he warmed up. We also started riding some leg yields from the quarter line to the wall, which really highlighted our lack of straightness! The first few leg yields were leading way too much with the shoulder, but once I remembered to bring the haunches with us they straightened out quite a lot, and I could feel the crossover improving as well. 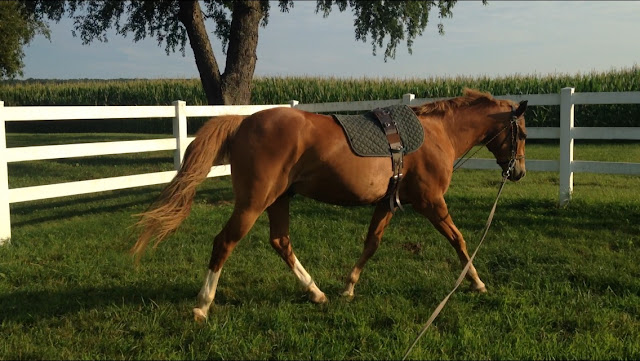 It was interesting to feel how dramatically the changes in my seat altered Dino's way of going as well. If I lost balance or got a bit tired in my core and started to bounce against his trot at all, he would tighten and hollow. Once I caught it and thought to sit more upright like a tuning fork and consciously follow the bounce of Dino's 'trampoline', he immediately softened and came through. It was a very cool thing to feel, and something I can continue to feel for at home.

My trainer very wisely observed that at this point in the lesson Dino was not ready for canter yet, but to help us get there she had me energize the sitting trot by thinking about how I would change my body to ask for the canter, but not trying to actually get the canter. That subtle change resulted in a power-trot, which was pretty cool! Without much effort, I had injected a whole lot more OOMPH into my pony's trot, and he felt so much more in front of my leg.

Eventually I had to pick up my stirrups again, but I stayed sitting for the majority of the lesson to keep the nice connection I had with my seat. Dino was starting to go quite well, especially to the right, and I didn't want to screw things up by switching to posting trot and somehow adding tension to the equation. I did eventually switch back and forth from posting to sitting, but maintaining the softness while posting was definitely challenging!

At this point, now that Dino was moving nicely forward and quite relaxed, we really started getting into the issues with our bend and straightness.

Basically, my pony is a pretzel and I completely enable him to be one.

Going to the left our problems are much more evident. Dino wants to lean down onto his left shoulder, lock the left side of the base of his neck, twist his head out to the right, and pop his haunches to the right as well as he drifts ever closer to the center of the arena, essentially totally ignoring my lateral aids from the left leg. I add resistance by trying to manhandle him out to the rail, and by allowing him to throw my body into his crooked way of going.

So, we began at the walk using my inside (left) knee to move Dino's shoulder back out where it should be. The goal was to make it really uncomfortable for him to lean on that left shoulder, all the while balancing that inside knee aid with a request for bending and softness in the base of the neck, and making sure that the haunches didn't drift too far to the outside.

This was work. For both of us.

Dino, however, put in a wonderful effort! Especially considering how ungodly hot and humid it was, the fact that we were doing dressage in the indoor (hateful), and really poking at the chinks in his armor of crookedness, he was fantastic. 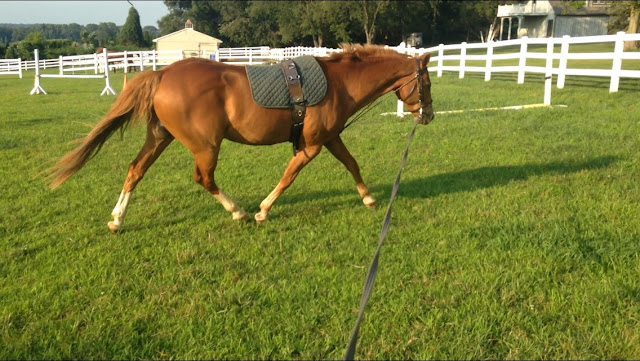 While Dino tried all sorts of tricks and evasions to get out of being straight (leaning on the wall when tracking right, holding his neck tight, popping his haunches every which way), when all the pieces clicked together it was downright magical. The difference in feel between crooked and straight was so dramatic, which was EXCELLENT for me from the standpoint of being able to replicate the work we did in our lesson in our rides at home. When Dino let go of bracing the base of his neck on the left and allowed me to push his shoulder up and move his haunches in line, I suddenly had so much more power underneath me. It was awesome.

We moved into canter once we had Dino going reliably straight, through, and soft over his back, and he was so, so polite about the transitions! Some of them were not pretty, but it was a far cry from his frequent temper tantrums when asked to canter in lessons.

The focus, again, was pretty basic. We worked on me trusting Dino to carry us forward instead of being over-active with my aids in an attempt to keep him in canter, gently molding his body and encouraging the same soft, round, connected straightness we had found in the walk and trot. It was tough for him, but he really tried, and we had some lovely moments on the right lead especially, with one absolutely fantastic depart from trot. The left lead was a lot harder, but I made a lot of progress in my ability to feel where Dino is out of whack in the canter. My trainer had me close my eyes and ride several big canter circles to the left, which was extremely enlightening in the feel department!

Eventually I was able to release the inside rein in both directions at all gaits and have Dino maintain the bend and straightness on his own, if only for a few strides at a time. It felt like great progress over the course of the hour, and I had a much deeper understanding of what I needed to do to help my pony improve.

At the end of the lesson, we took these concepts into the stretchy trot, releasing Dino down with the inside rein first, and then with the outside only so far as he could go while still maintaining a good connection and holding himself straight and moving through. I tended to drop him a bit once he started offering the stretch, but the quality was really so much better when I maintained the outside rein connection and let him go down little by little! I ended the ride feeling incredibly accomplished and motivated to continue improving in the dressage, and take these concepts over fences next week.

I also loved the conversational aspect of this particular lesson. My trainer allows me to bounce thoughts and feelings off of her as I ride; I can tell her "I'm feeling him push his left shoulder into me and while I'm trying to correct it, I'm also feeling that I'm sitting too far right. What do you see?" and we can have an active dialogue in which I can compare and contrast what she sees vs. what I feel. When I find myself shouting, "GOOD BOY!" at the same time she exclaims, "YES THAT'S IT!" I know I'm on the right track with my riding! I can say out loud, "I'd like a bit more push here in the trot, but it's straight," and have my trainer agree, disagree, or make a change in what I'm doing. This dialogue is so helpful in the learning process to me, and I'm very thankful to be working with someone who likes to talk and ride!

Do you like to converse with your trainer during lessons, keep silent the entire time, or wait until a break to chat? What sort of conversational learning relationship works best for you?