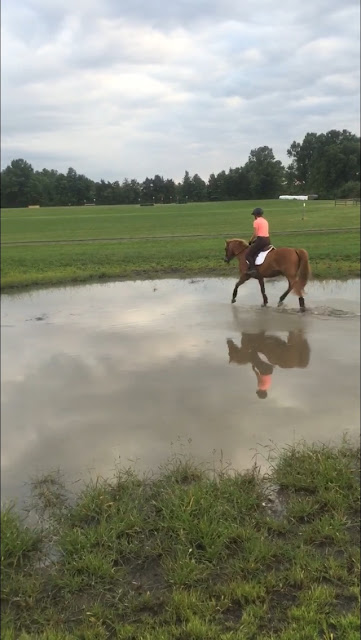 On Friday evening my barn buddy and I went over to the horse park with the intention of schooling the jumper course from the hunter/jumper show the day prior. She hadn't jumped her horse in quite a while, and I just wanted to see if my pony would jump off-property. We were both feeling timid and rusty and needed a good opportunity to just go jump some jumps!

Unfortunately, when we arrived we found that the jumper course had been mostly dismantled already in preparation for the dressage show next week, but luckily for us the hunter derby course was still standing out in the field.

It was perfect for our needs - all of the solid fences were nice and small, and the pole-and-standard jumps were already set at a friendly height. The biggest thing out there was a couple of 2'6" oxers.

Dino warmed up fairly well and was, for the most part, compliant and forward. I do think he's due for his next Pentosan injection, however, as he felt just a bit strung-out and weak throughout the ride. 4 weeks since his last shot is Wednesday, so he's really right on time with that! I'm so glad it's making a noticeable difference in his comfort.

In any case, my goal for the day was to just have him jump everything I pointed him at the first time. Trot or canter, didn't matter to me, just JUMP THE THINGS, PONY.

So we started off by trotting a tiny log on the ground.

It was, blessedly, a non-event.

I proceeded to trot him over every tiny jump in the ring, from mini-coops to brush boxes to a single layer of straw bales, and then we cantered all the tiny jumps.

And he jumped them. No questions asked.

He even jumped when I gave him an absolutely awful ride to a vertical on the outside line, waffling about whether to go for a weak, long distance or wait for a chip, and not really steering. Dino thought about bailing on me, and then HE JUMPED.

These are the kinds of miles we need - opportunities that show Dino AND me that even when we are far from perfect, we can still make it over the jump in one piece.

I was having a hard time getting a more powerful canter, so about halfway through the ride wised up and went for the smaller, add-stride canter which prevented a lot of awkward-long-distance woes.

We did also have two refusals during this schooling. One at a plain vertical at which I waffled about the distance, stared down at the jump, and then took my leg off. It was a bad ride and I deserved that stop. But I was able to make the correction and jump it successfully multiple times after that. The other refusal happened at a solid post-and-rail fence at which I, again, basically stopped riding when I didn't see a good distance instead of putting my leg on and waiting for the jump to come up. I deserved that, too. But again, I corrected my bad riding and jumped it very well a few times. We also hopped over the double stacked straw bales and a normal-sized BN coop without any issues.

Since we were at the horse park already, we decided to play over some cross country jumps as well. 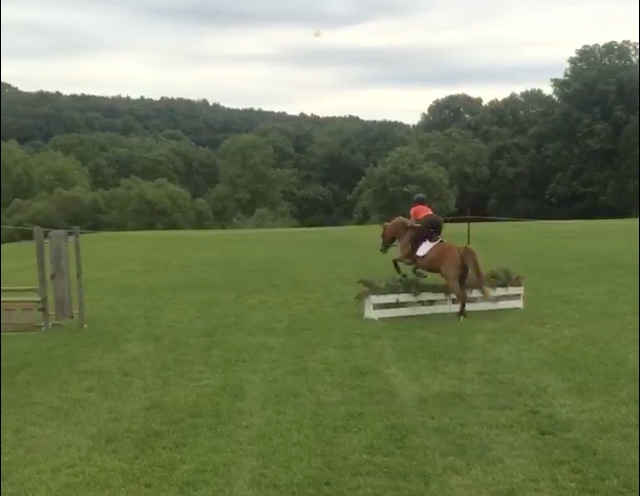 Again, my only goal was to have him jump everything on the first try, and we did it! While he was a bit surprised that we weren't done yet and gave the hairy eyeball to the first two tiny logs I pointed him at, Dino trotted right over anyway.

He got bolder and better the more we rode, and down the airstrip he burst into a great hand-gallop and pulled me to the fences! I was so thrilled, telling Dino what a good boy he was as we galloped over all the little logs. We tackled a few up-banks since he had taken such offense to the bank at Burgundy, and Dino hopped eagerly up them. I was feeling too weenie to jump down, but was ecstatic that Dino was feeling so eager and honest on cross country!

By the end of the ride Dino was hunting the jumps, and I couldn't have been happier. With a lead from our friend, he even jumped up the bank out of the water complex for the first time! I think a successful horse trial at Elementary is definitely in the realm of possibility for us by the end of the year, and I'm feeling so hopeful about our progress in building Dino's confidence and reliability back up over fences. Maybe one day we'll even get back up to Beginner Novice again! Either way, I'm just thrilled that my pony is enjoying his job again.