Surprise, I went to a clinic!

Luckily for me, Andrea Davison (formerly Andrea Leatherman before she married eventing superstar Buck Davidson) is headquartered right in my area. She holds jumping clinics throughout the winter, and after watching Windows and his person at the last one, (Andrea is also her regular trainer) I bit the bullet and signed up for the November clinic.

I liked Andrea's teaching style and the way she uses grids to develop the skills horses and riders need in the following coursework, but I was nervous about going to this clinic for a few reasons.

One: Dino is The Worst at group lessons. Like, seriously terrible. He thinks that every time we take a break for someone else to jump, he's done, and then throws a major tantrum when I tell him he's not done. Thank you, college lesson program, for completely frying his brain in this manner.

Two: Riding in front of a 3* eventer and a bunch of people I've never met before in my life. That's scary. Also, watching the Prelim level lessons last time was mildly terrifying.

My primary agenda when I got to the indoor arena at the clinic was to install the Go Button. Immediately. Being in an indoor in a group lesson was NOT going to be a cakewalk. I jogged Dino in-hand before I got on, and then sent him IMMEDIATELY into a nice long & low trot as soon as my butt hit the tack. Go button, installed!

Andrea had all of the riders in the lesson come into the middle of the ring to introduce themselves and their horses, and identify their biggest issues that they wanted to address in the clinic. I told her that my main problem was riding way too defensively and/or backwards to the jumps. With that, she sent us out on the rail for some quick warm-up flatwork.

She asked us to ride in a line and maintain the same amount of distance between each horse. This was actually really beneficial for Dino and I, since the horse in front of him "pulled" him forwards a bit without me having to completely squeeze his brains out.

Right away, Andrea called me out on my too-long reins.

Ironically, my long reins cause me to pull back MORE than I need to and get behind the motion in order to feel like I have contact. Shorten my reins, get my hands out of my lap, and voila, my upper body is on the vertical and I'm not riding backwards. I can push my pony into my hand. It's a magical thing.

Shockingly, every time I glanced in the mirror during the trot work I actually liked the picture I saw. It was weird.

Andrea had us ride a 20m circle at each end of the ring, slightly collecting the trot, and then ride forward down each long side.

After a break standing in the middle of the arena (my first mistake - not keeping Dino moving during breaks) we moved on to the same exercise at the canter, and then Dino had his first tantrum at the clinic!

He did. not. want. to. canter. There was a lot of fast trotting, and shoulder-whacking, and Andrea telling me to whack him one good behind my leg, and me being a weenie and not doing it. Eventually, thankfully, Dino cantered, and we were able to finish the flatwork exercise. It wasn't pretty, but we did it, and by the end I had Dino hand-galloping down the long sides. Yay!

This was the course that was set up for the day: 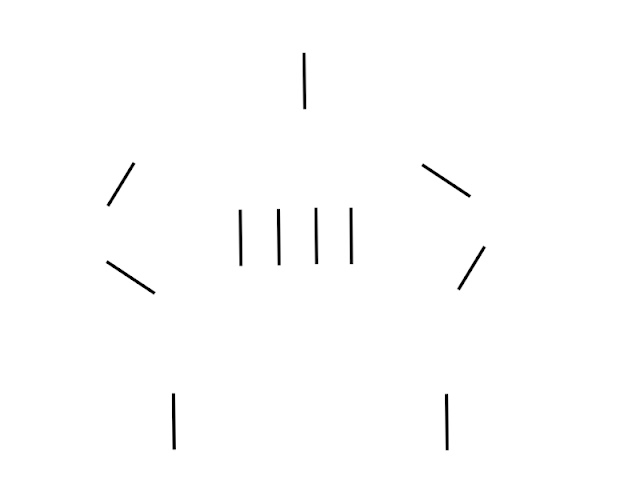 Yup, it's just as crazy as it looks.

The center line was comprised of 4 bounce fences, with the diagonal jumps on the ends set at 2 bending strides to and from the grid. The outside line was 4 strides, and then there was a lonely single fence on the other side of the arena.

All of the jumps were itty-bitty crossrails and teeny sub-2' verticals. Definitely small enough that no one had to worry about the height of the fences and could concentrate on the ridiculous turns in the course.

We started by riding through the bounce grid by itself, focusing on riding the tight turns at the end of the arena off the outside aids and riding straight after the set of bounces and not letting the horses dive in and cut the turn. Dino was a little sticky the first couple times through, but soon we found a great rhythm. Andrea wanted me riding forward, forward, FORWARD and keeping the motor running the whole time.

Then, things got CRAZY!

I tried to get Dino moving and grooving while the horse before us was jumping, using walk/trot transitions and turn on the haunches to let him know that just because we weren't jumping, it didn't mean that we were done for the day. He got better and better as the lesson went on, and while I still had to MAKE him canter, it took less and less effort each time.

The first time through, we didn't have quite enough impulsion overall and Dino broke to the trot around the (very!) tight turns, and stuffed in a third stride in one or two of the two-stride lines. Everything felt a little disjointed, but I was actually mildly surprised that we made it through the entire exercise without me doing anything incredibly stupid, missing a turn, overshooting a turn, or having a run-out. Win.

Everyone got a chance to go through the pattern several times, and Dino and I got better and better each time through. I tried to be really cognizant of keeping him forward through the turns, and keeping my reins at an appropriate length. Things fell apart and got sloppy when, surprise surprise, my reins got too long. I did manage to end each run through the pattern better than how I started, which was awesome.

Got it? It's OK if you don't. Just know it was a long, nutty pattern with LOTS of tight turns, bending lines, and related distances. Super technical.

Dino and I had pretty much the same issues as we'd been having throughout the lesson: not enough impulsion leading to an inconsistent rhythm, and my long reins screwing everyone up! The first half of our first time through the course was pretty ugly, but I managed to remember the entire thing AND redeem us by the end of it. In the second half of the course, I was actually riding forward and had my hands up and in front of me, helping everything flow better. Success!

We all got to ride the full course a few times, and the last time through Dino and I really nailed it. It took me almost the whole lesson, but I finally put my cowgirl pants on and rode the snot out of my pony starting from the way I galloped him down the long side and around to the very first fence. Andrea reminded me to ask Dino to GO on the backside of each jump, reinforcing our "Land & Gallop" practice that we've been working so hard on. And oh my goodness, what a difference that continues to make! Dino ROCKED around the course, and while I was riding hard, it wasn't a painful thing to get him to move forward. I felt that we definitely improved our performance over the course of the lesson, and while a part of me was disappointed that the fences weren't bigger, another part of me was happy that we worked over the small-but-technical exercise.

Here's a short clip of a small part of the lesson:


It was also a lot of fun riding with the group of ladies in my lesson! Everyone was so kind and supportive, and as the lesson progressed each rider was treated to clapping and cheering when they completed a course successfully. Even though I was flailing around tiny jumps, it was great to feel supported by Andrea and the other riders in my group.

The takeaways from this lesson weren't groundbreaking, and were things that I'm aware of, but they are issues that I NEED to resolve! The whole clinic was like one big DUH moment:

-Shorten your reins. For real. I can give more with my hand when my reins are short, and automatically ride more forward when my hands aren't in my lap.
-The pony needs to go when you tell him to go. This seems like such a non-negotiable, simple thing, but given Dino's history and epic temper tantrums, there is a big part of me that is just TIRED of fighting with him about forward, and a little afraid to push the issue, and lets him do whatever he wants. I know that I need to get over it and create a 99% reliable (because, let's face it, nothing in horses is ever 100%) Go Button. This is just really, really hard.
-Land & Gallop. This seriously eliminates SO many issues I have when jumping; if I can just remember to ride aggressively forward after each fence, we're in good shape!