He turned 17 this year, and I couldn't love my little buddy any more. To celebrate, he got new shoes in the morning, and then we went on a trail ride in the afternoon. Dino really enjoyed our little excursion, especially since the grass is now so tall in spots that he can eat it without even having to put his head down! 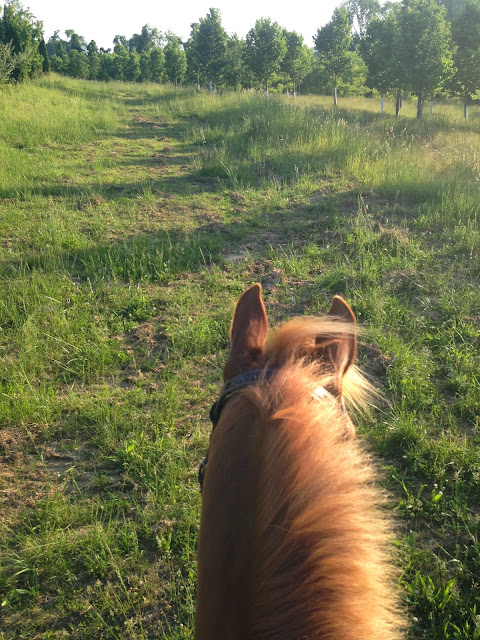 Over the holiday weekend I managed to fit in a couple rides. We did some low-key flatwork on Saturday morning, which Dino was fabulous for. We followed up some good quality canter work with a nice hack through the tree farm, and we saw our resident mama fox, Mrs. O'Brien. It's so cool to see so much wildlife on a daily basis - between the fox and her kits, turkey vultures, songbirds, deer, and woodchucks, there are tons of friends at the farm!

Dino had Sunday off, and we did a jump school on Monday since Michael and I both had the day off and I could bring him to the barn to supervise. I wanted to work on a consistent canter rhythm to build on what we did in our lesson last week, so I set up a little bounce exercise: two canter poles to three small bounce fences. The first couple times through Dino couldn't quite figure out the distances of the poles, so he trotted them awkwardly, but after the first two tries I really pushed him forward and he NAILED IT every time!

I took that good canter to a few single fences and really tried to let the canter do the work while being accurate about the line I wanted to ride. While Dino was a little pokey in the heat and needed a lot of leg, I was mentally present and was able to give him a good ride WITHOUT pulling or blocking him. Success!

We ended the ride with a few jumps through the one-stride line, which lazy pony had determined was a two-stride, so I put the first fence up a few holes and had Michael bring the second fence in about 2 feet, and THEN it was a proper one-stride.

Flora Lea seems like it's coming up WAY too fast and I'm hoping I feel ready by the time it comes around! There's never enough time to prepare...