This past week Dino has been feeling a little... shall we say... defiant. I think he's gotten to the point with the canter depart that he's learned how to do it the "new" way, which is kind of hard, but he's figured it out, so he's trying to get away with doing it the "old" way. I.e. not transitioning up to canter at all, and/or flinging his head in the air like a carousel horse on crack, because that doesn't take as much physical effort.

On Tuesday I made things worse by getting into my Perfectionist Emotional Dictator Mode and quite honestly starting a fight with Dino. The only thing that did was get him even more anxious about the canter depart, and then we fought about him moving away from my right leg and actually bending instead of acting like his body was a 2x4, and the whole thing just turned into a big fat mess. I managed to calm down and end on a somewhat good note, but it was not my finest moment.

Wednesday we rode western and just got out of the ring and played in the turnout fields, around the round pen, and took a nice walk down the road. No real "work". It was fun, and I think we both needed the mental health day after over a week of hardcore dressage.

Thursday he had the day off, and yesterday and this morning brought us some okay rides. Not as fabulous as last week's work, but I had a lot more success with getting a good right bend, and some nice round canter departs. We did, however, need to have the "leg means go" discussion a few times. This morning I also popped him over a few jumps, and it turned out to be a nice confidence-builder for me. My barn owner had put up some fences in the 2'3-2'6 range to tune her mare up for their show next week, and the weenie in me was TERRIFIED at the thought of jumping them.

So I started small. I trotted and cantered the one crossrail that was set up, and was highly successful. Dino was hunting for the jumps this morning, which gave me a huge confidence boost! Then I jumped the crossrail to a small vertical, and was successful again! No stops, no freakouts, even when Dino decided to take the flyer of a long spot. I jumped the line a few more times until I did it in a nice compact 5 instead of 4, and called it a day. Progress! I'd like to try to get in another jumping lesson with Elissa within the next week or two and have her tune us up a bit, and get her input on how my work on the canter depart is going.  But for now, we're looking fabulous in our new open-front boots (courtesy of my brother Greg!) while we school around at home: 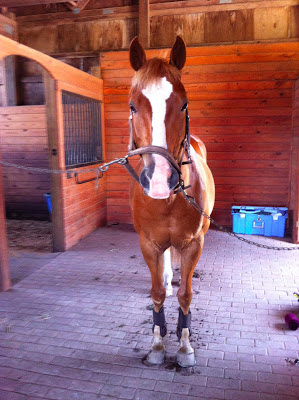