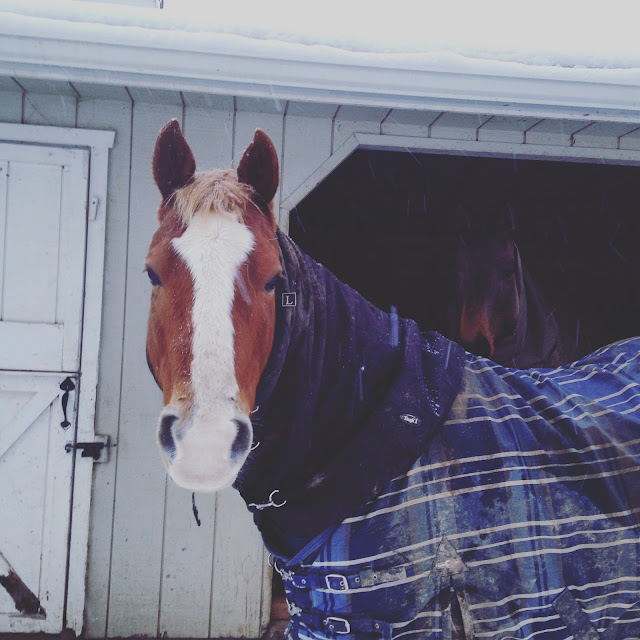 On the days we don't ship over to the indoor (read: pretty much every day) it's been really difficult to get motivated to ride. When the ground isn't rock hard and frozen, it's slick mud, and when it's not slick mud, it's deep mud, and when it isn't any of those, it's covered in deep snow.

Jumping has been totally out of the question since November, and getting any kind of productive flatwork done has been incredibly difficult.

Essentially, the only thing we've been able to do lately is walk.

And not even walk anywhere interesting, since the footing in the vast majority of our 50 acre property is unsuitable even for that. Even with a couple inches of good snow cover it's still dangerous since the snow obscures the gopher holes, and no one needs to get their pony's leg stuck in one of those. So we've been walking around the perimeter of the pasture fence and up and down the driveway ad nauseum.

Yesterday we trotted up a hill. Twice. Yay.

The thing that's been getting me in the saddle each day despite the seemingly endless boredom and frustration is Denny Emerson. If you don't follow him on Facebook under his page Tamarack Hill Farm, you should. The man doles out a dose of tough love, inspiration, training wisdom, and good common sense on a daily basis.

Denny is a huge proponent of two things: Fitness and Hard Work.

Day after day I read him espouse the values of getting out there, swinging a leg over, and riding every single chance you get, especially on the days when no one (including you) wants to ride. Those 20 minutes of walking your horse up and down hills in the bitter cold, in the snow, when you'd rather be warm and snug on your couch are 20 minutes your competitors aren't putting in. They're 20 minutes towards your and your horse's improved fitness. Those 20 minutes, despite how futile they may seem, are a deposit into the account of your next successful endeavor.

And so, every day, I listen for Denny's words in my head as I trek out to the barn, brave the cold, deal with the poor footing, spend the time to tack up and get dressed, swing a leg over, and put in my 20 minutes. It may not feel like much in the moment, and I may desperately want to be warm inside my cozy apartment, but Denny assures me that because of this effort I'll be miles ahead once spring finally rolls around.
Email Post
Labels: fitness motivation