Expect the Best: A Lesson Recap


I love that I come away from every lesson more encouraged, determined, and motivated than I was before! Our latest session with my fantastic trainer has given me a lot of food for thought, and set us on a path towards continued improvement.

I didn't get Dino quite as warmed up as I wanted to before the lesson, and had only done some walk work and slow stretchy trot by the time my trainer got off the horse she was on and came in to get started on the lesson. My pony was, however, not cranky at all, just a bit behind the leg at the beginning.

We started getting down to business at the trot, generally getting Dino to loosen up, stretch over his back, and start carrying himself forward a little more enthusiastically. He was tough to get motivated that afternoon, and I was having to use a LOT of leg to get him pushing from behind and into the bridle. We worked mainly on the rail, giving Dino the visual space to GO forward, and once he was a little more reliable off my leg my trainer had me add in some 15m circles at each end of the ring and in the middle of the long side, asking Dino to collect himself more, and then as we left the circle to go back on the outside track, she had me really push FORWARD to engage his hind end.

Dino responded really well to this exercise! Despite being a bit behind the leg, he really brought his A game to the flatwork in this lesson, and after a little while we were cruising around in an awesome, balanced, straight, through trot! The hardest part for me was to keep my hands low and still, giving Dino the responsibility for staying in self-carriage.

We continued the exercise in the canter, and it was literally THE MOST CANTER WORK we have ever done in a lesson before! Dino was awesome but wasn't giving anything away - I had to work hard for the roundness and self-carriage to happen, but IT HAPPENED and I'm so excited that my pony showed our trainer his Dressage Skillz. It was great to have her input on the latest and greatest iteration of Dino - he changes and develops just about every month or so in such away that I have to figure out how to ride him all over again. She gave me some great input on how to get the good canter to be more consistent and through all the time, which has a lot to do with me expecting it from Dino and riding to that expectation. We ended the flatwork portion with what was one of the best canter to trot transitions of my life, which my trainer described as, "That was an 8! At least! That was lovely!" I'm really feeling confident about our dressage lately! 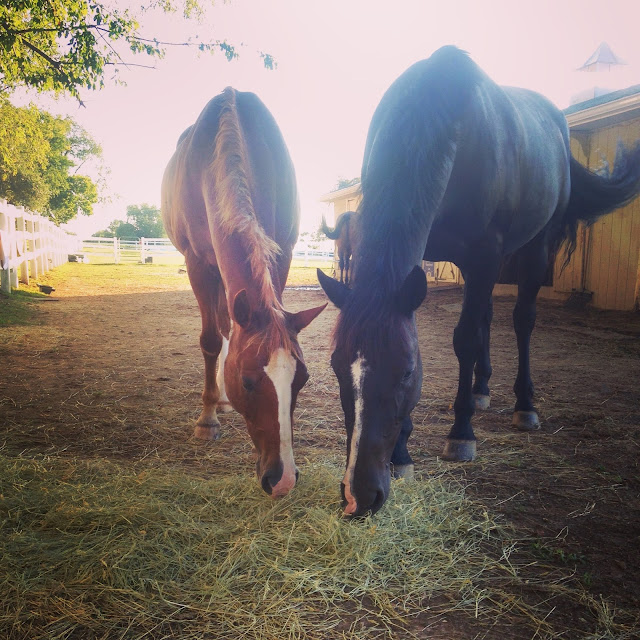 Because writing out every detail would take ages, here are my main takeaways and "challenges" from my trainer from our flatwork session:

-Challenge: Keep hands quiet and outside rein steady - pinkies on the fuzzy half pad and LEAVE THEM THERE!
-Dino no longer needs such a giving outside rein to bend right, left rein can stay steadier and right rein can be quieter; he is capable of maintaining bend by himself without so many reminders.
-Challenge: Sit like a 'real' dressage rider in the sitting trot. (chest and chin up, out of driving seat) and let Dino maintain self-carriage without over-riding every step.
-When Dino wants to get heavy in the contact, maintain 'dressage seat' and hands - don't start getting active or throw away the contact because he is being heavy or resistant. Expect him to come back to you.
-In canter: "slow down the inside hand" - essentially be quieter with the inside hand, don't feel that you need to be 'breaking up' his resistance all the time. Keep inside hand up to encourage bend, but more than that is not needed. To the right especially, outside rein STEADY to avoid over-bend in the neck.
-Also in canter, 'sit like a dressage rider' with the expectation that Dino will carry himself, shift seat to neutral. Don't work so hard and let Dino meet you halfway in the canter.
-In canter depart, MAINTAIN CONTACT. Pinkies on half pad!

The jumping portion of the lesson was filled with just as many excellent tidbits. Dino was in a testing frame of mind after our last lesson when I had a mini panic attack and repeatedly turned him away from the jumps to the right, so his gears were definitely spinning and the right runout was an option that he considered - and took - a few times. We started jumping with a big, loopy figure-8 pattern over a crossrail with a placing pole, around to a plain vertical. We did this a few times both ways, and Dino tried to exit stage right the first time I presented him to the pole-to-crossrail bounce. But this time, the difference was that it was Dino's idea, not mine! I spun him back around to the left, gave him a smack on the right shoulder, and re-approached. He popped over just fine, the stinker.

I was having a little trouble getting the pony to be quite forward enough, and while we didn't have any 'bad' fences because of it, he was just a little bit long, flat, and on his forehand coming around the turns. My trainer pointed out that Dino doesn't have a problem with getting flat when he's motoring along at an appropriate speed, but defaults to getting heavy on his front end when he's not going fast enough.

So - a little more speed was the name of the game.

After a few rides through the figure-8, my trainer asked me to concentrate on what was happening on the backside of each fence. She wanted me to land and GALLOP Dino into the corner before making my turns. This had a few different effects: I got 'with it' more quickly on the backside when I had to sit up and GO instead of taking my sweet time to recover on landing. The Land & Gallop also gave Dino a sense of purpose and an indication that we were not done jumping. Because the indoor is so small and closed, the horses can't see where the next jump is until after they've made the turn, so by riding a little more aggressively after the jumps, I helped clue Dino in to what was happening next. The Land & Gallop also established a better pace that could then be managed and balanced before the next fence.

We then incorporated those two fences into a little course: The vertical into the bottom right corner of the ring, left turn up the diagonal to the crossrail with placing pole; this time riding it so that the pole was on the backside of the jump. Right turn to a skinny barrel on the quarterline, right turn to a two-stride vertical-to-oxer combination on the opposite quarterline.

The first time around, we had some trouble at the barrel. Dino swiveled his ears and wiggled and looked and eventually bounced to a stop right in front of it. Even so, both I and my trainer were pleased that it was a STRAIGHT stop instead of WonderPony exiting stage right. We came around to the barrel again, and I concentrated on our straightness instead of the distance, and Dino jumped the barrel beautifully. Unfortunately, when we came to the two-stride for the first time I hadn't galloped into my corner before the turn, so we came in on a half stride and clever Dino decided that he'd save us from that uncomfortable distance by - you guessed it - running out to the right. Another quick left turn and a tap on the shoulder, and we re-approached and jumped through successfully. 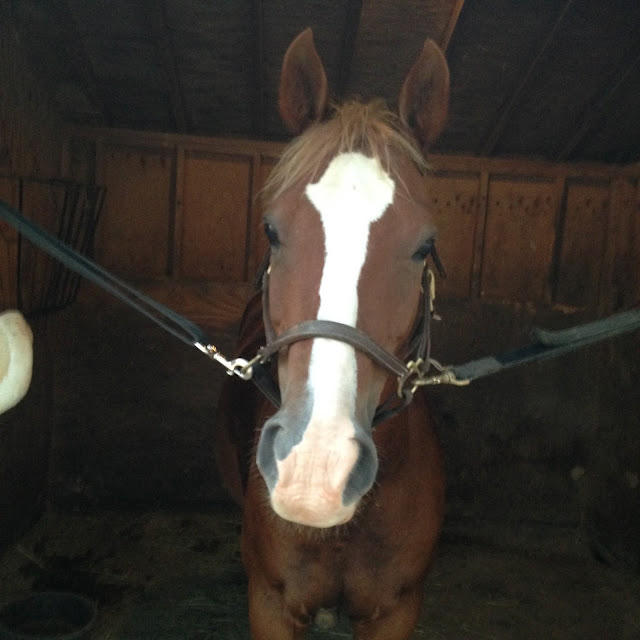 At this point in the lesson I felt like my legs were going to fall off, but we really needed to jump the whole course one more time. While it wasn't absolutely 100% perfect, we successfully negotiated the entire thing, and I managed to keep it together and keep coming even if I didn't see the perfect spot to every fence. Dino was jumping a 10 over everything with his knees to his eyeballs and his withers making serious impact with my stomach in the air over each jump! Both my trainer and I were THRILLED with how well he was jumping.

Here I give you the Reader's Digest version of the key themes of the jumping session:

-No matter what happens, KEEP COMING. Focus on straightness instead of a distance.
-Land and GALLOP INTO THE CORNER - the indoor ring is so small that the next fence is not visible until after the turn; Give Dino purpose and a lighter, more balanced landing with 'land & gallop'
-Keep going straight! The straighter you are, the more powerful your canter, the better your approach.
-On skinnies: Straightness, again! It's OK if he bounces to a stop right in front of the fence, come again and funnel him straight in. Don't let the wiggles become a run out.
-More on land & gallop: helps with track by putting my focus on riding the line with intent, which can prevent coming in on the half stride/runouts
-Dino sees the right runout as an option if the distance isn't coming up perfectly, focus on riding a bit left for now until he gives up on that solution.
-Ride strong until you feel him lock & load on the next fence.
-If a fence worries you, pick a spot on the jump and stare at it and keep coming. Skinnies are easier for this because there is a smaller horizontal face to focus on; wider jumps provide 'too many places to look'.
-It's OK that Dino is sometimes seeing the longer one and I am still waiting for the add - that's where we are right now as I develop my ride and nothing to get upset over.
-Dino is jumping VERY WELL!

My lessons have been so exciting this year, because each time I go Dino has improved and changed so much that I need to learn new techniques to help me bring out the best in him. We went from being essentially unable to bend or weight the right hind leg at the beginning of the spring season, nevermind consistent contact, to now working on transitioning myself to doing less and less to "help" my pony maintain self-carriage. I am SO excited about our dressage, and how fun Dino is getting to ride on the flat. And while there are definitely kinks to work out in the jumping, the quality of Dino's jump has increased tremendously this year. He's always been a talented jumper, but the way he's using himself over the fences now - on a consistent basis - is absolutely awesome. I'm getting more and more comfortable with trusting the right canter and track to get us over the fence, and having a heck of a lot of fun doing it.
Email Post
Labels: dressage jumping lessons