Last night's ride was almost not, but I managed to hop on the pony before the torrential downpours started.

Originally the plan was to jump, but my jumping buddy's plans changed, so I rolled with it and decided to go for a dressage school since I have a new test to learn for Flora Lea next weekend.

They're using USDF Intro C for the Elementary dressage phase, which is kind of a silly test in my opinion since it's only just introducing canter, but Dino and I have a much better groove going at the trot anyway, so I'll take it.

I used my newly-shortened reins for the first time, and it was kind of awesome to not have over a foot of excess dangling from my hands and getting stuck under my saddle pad and threatening to wrap itself around my toe. Y'all - 60" is not an appropriate rein length for a large pony. I had 8" taken off each rein and it made a HUGE difference! Plus it only cost me $15, which is way cheaper than new reins. I also figure that giving myself less physical rein length to work with might help me keep them at a reasonable length. 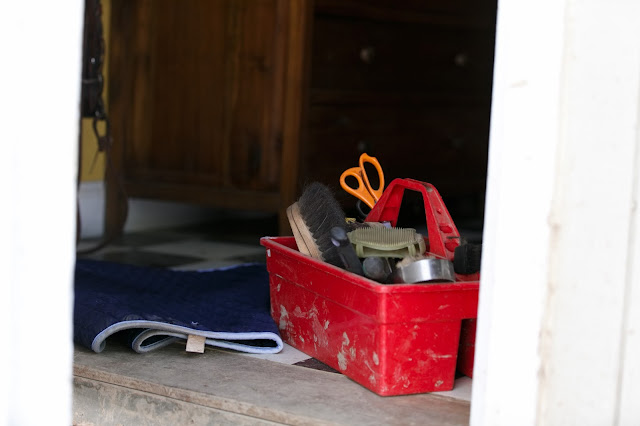 Dino was really up, shockingly! There was a storm rolling in, so I'm sure that had something to do with it, but I had a LOT of pony on my hands. And he was literally on. my. hands. Homeboy was SO heavy for much of the ride, and my decision to not wear gloves was a poor one.

I did a lot of big circles and serpentines trying to get Dino to relax a little and start shifting his balance back and using his inside hind leg. It was tough work, as he wanted to rush forward and lean into my hands instead of sitting and slowing down. In hindsight, I should have half-halted more strongly in my core and used some smaller circles to get Dino's body aligned, but I spent much more time bracing against him than I should have. Remember that whole 'push the bit forward in his mouth' thing? Yeah, didn't really accomplish that. Let's not even talk about keeping my chin up because that was a major failure yesterday! I did, as the blisters on my fingers will tell you, keep my reins short and keep the contact the entire ride! 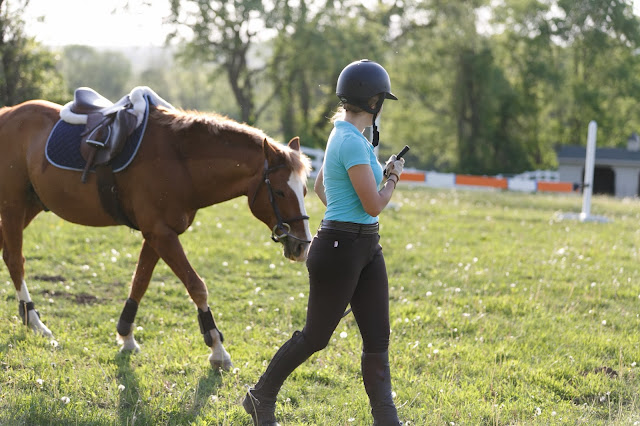 Once he wasn't quite so tense, I ran through Intro C. It wasn't the worst test ever, but man do I really have to focus on BENDING the entire time! Now that I know it's an issue for us, I'm really starting to see how much I don't think about my pony's bend except when I'm doing lateral work. It was quite eye-opening to realize that I'm so unconfident in Dino's ability to stay on the line I put him on that I sacrifice bend to 'keep' him on the rail, or on the circle, or whatever. Whereas if I would just ask for proper bend to begin with, my pony would be more engaged, straighter, and better able to go where I want him to in balance.

I also really noticed that most of the time, my body is not saying "bend" save for my hands, so Dino (rightly) gets a bit offended! We did have some good moments in the ride when I got my act together, though they weren't consistent. After I practiced the test once I really got down to work doing lots of transitions to get Dino to focus and balance back. He was very forward and very sharp off my leg, but getting quality transitions and gaits was the challenge of the day. We were able to end on a good note, and I let him gallop up the hill to the barn when we were done dressaging.

And man did he GALLOP! I don't think he's gone that fast since before we moved!

So, homeboy, don't lie to me when you say you can't keep cantering. I know you have a few extra gears in there.
Email Post
Labels: dressage