Dressage at the Park - HPNJ

Since we are currently on a brief hiatus due to some farriery issues, I've got plenty of time to write up our July show recap from the Horse Park of New Jersey!

On the Thursday evening before the show, I had just finished my (not-great) last ride before the show, and was watching Dino in turnout to see if he would attempt to remove his grazing muzzle. It was then that, at the slowest of slow walks, he stepped on the heel of his right front shoe and I saw him pull it straight off his foot. Two days before a show.

After a drama-filled day of trying to work with our regular farrier to tack the shoe back on, he ended up being unavailable, so I went with Plan B, which was to enlist the help of the on-site farrier at the show. We ended up pulling into the show grounds a little over an hour before my test, whipping Dino off the trailer, and having the show farrier tack his shoe back on in about five minutes. He didn't do as great a job as our regular guy does, but the shoe was on and we could compete! 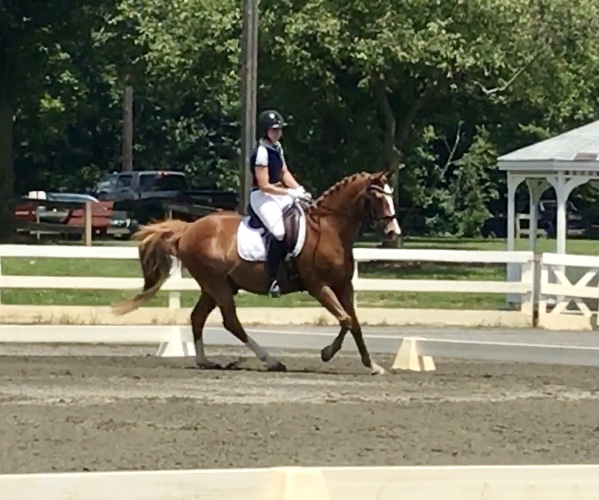 I was feeling a little harried after that whole ordeal, but thankfully had lots of help and support from friends to get Dino and I dressed and ready for warm-up. My mental state at competitions has also improved SO much this year - while I was definitely a little tense and worried after the stress of getting the shoe back on and worrying if we would be on time, I wasn't freaking out. My brain didn't get stuck in the endless loop of, "I can't," I could still THINK, I could still BREATHE, and I was feeling relatively zen about it all.

Our warm-up for our test, another crack at 2-1 for a bronze score, was just okay. I was still feeling the after-affects of our stressful arrival, Dino was feeling pretty tight in his body, and HPNJ has a pretty big atmosphere with three show rings, a loudspeaker, stabling nearby, lots of people, and a busy warm-up complete with fractious stallions. I never got him truly relaxed and through before the test, and wasn't super enthused about his response to my forward aids. I tried to use some passade turns to get him working more on his hind legs, but with the amount of tension he was carrying they just weren't helpful. I did practice some centerlines and halt-trot transitions to get him a little more tuned up, which did make a positive difference, even though I definitely didn't have my best pony going into the test. But, that's horse showing, and I went in the ring with the best I could muster.

The test, while not mind-blowing, was absolutely better than our last attempt at 2-1 in June! Overall I felt it was vastly more consistent, and the only blips we had in the canter work were not holding the counter-canter long enough. We survived the transition from medium to collected and the 10m circles just fine! And there was not a 4 to be found in the entire test, which is a big step forward in our scores. 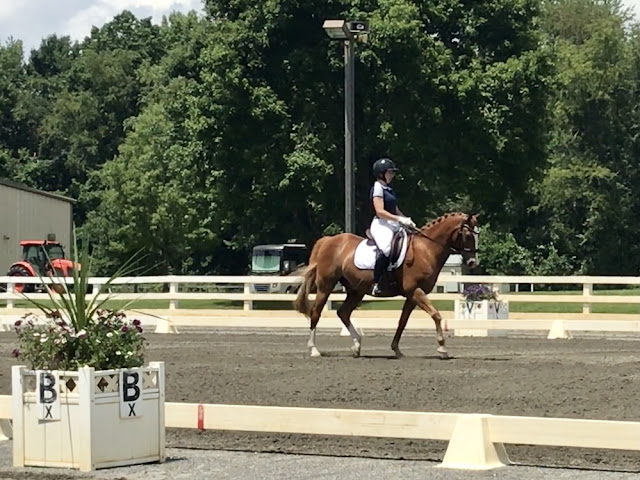 Since I never got Dino fully on the aids, we got nailed with 5's for our drifting shoulder-ins and incomplete counter-canter. However, we were also rewarded with 7's for free walk, the canter-collected trot-medium walk transitions, and some of our collected trot work. The rest of the work garnered us a pretty consistent smattering of 6's with the occasional very acceptable 6.5, or a deserved 5.5 for some of the canter work and our last medium trot where I was majorly running out of steam. We got 6's and 6.5's in the collectives, which honestly at this point I'll take!

The judge wanted to see more collection, connection, and power from Dino, which I absolutely agreed with, but said he was "lovely" and commented "pure" on his gaits. She noted that I was "crooked" in my position, which was probably influenced by the way I very conspicuously hauled myself back to the middle of the saddle right in front of her to prepare for the rein-back. All in all, the judging was very fair and we scored a MADDENING 59.595%, missing the qualifying Bronze score by a literal half a percentage. While I was really pleased to have improved our score from last time, missing the 60% by such a small margin drove me insane! 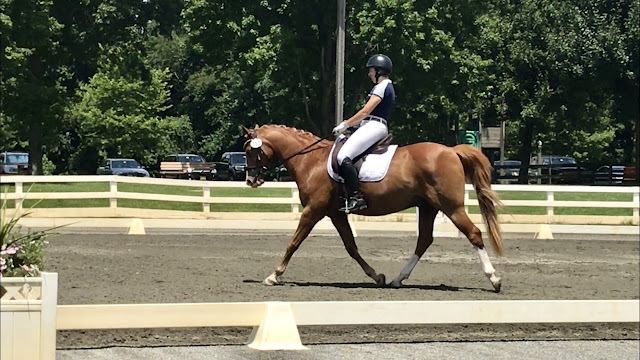 Despite not having a great test, it was such a fun day with friends. I really enjoy showing these days even if I'm not lighting the world on fire with my scores! It also gave me a ton of food for thought about showing Second Level and how much more demanding it is, and what needs to be in place for Dino and I to score better at this level.

Looking at the media, I see a pony who is way, way too long in his frame, and a rider who needs to shorten her reins. He looks like an absolutely adequate First Level horse, but nowhere near as balanced and collected as he is at home. If I'm going to have any hope of getting my scores, I need to really shorten up my reins and ride Dino's wither up between my hands. You know, like I do on a daily basis in schooling and lessons.

Second Level also demands that he be completely on the aids throughout the test, which is something I have a really difficult time achieving in the show ring. He checks out as soon as we complete the first halt, and while practicing centerlines definitely helps, it's not enough. I want to haul out to school in different dressage arenas as much as I can and practice getting after him in the "show" ring. Dino knows I won't nail him with the whip or give him a big correction when we're showing, and he absolutely takes advantage of that. I think I also need to re-examine how I warm up, and what I need to get across to Dino before we even head into the ring.

And lastly, more fitness for both of us would absolutely help us out. These tests are LONG, (about 6 minutes) and I feel both myself and my pony running out of gas in the last third of the test. I need to be intentional about working for longer periods of time and not taking quite as many breaks, as well as making time to hack out more and get in some longer big trots and canters. 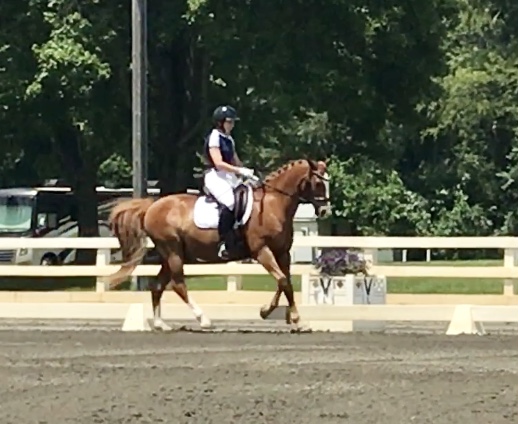 We may not have won the day, but I had a blast and learned a lot, and for me, that's what showing is all about anyway!