It's been... actual years since I've long lined my pony.

While I learned to long line in college, I am not particularly good at it. Managing two lines plus a whip plus trying not to trip over anything and die while the horse I learned on made his best effort to bolt off into the sunset with me water-skiing behind him was... not a great experience for me. And while Dino is The Best Most Tolerant Pony Ever TM , our previous attempts at long lining left both of us confused and frustrated, and it wasn't really the helpful training tool I hoped it would be. I stuck with lunging in a chambon. Much easier.

But, when Ashley recommended that we do some long lining (and with the sparkly promise of maybe learning piaffe dangled in front of me), I dusted off my lines and surcingle and decided to give it the old college try.

True to just about everything else, dressage has somehow had made us both magically better at long lining despite not having picked up the lines in years. Dino was understandably a bit confused as I fussed with everything and got tangled a few times, but as per usual he tolerated his crazy lady like the gem he is and just waited patiently while I got my act together.

Pretty much right away I was able to ask him to change directions at the walk and swap between moving around me on a circle and ground driving with me behind him. We worked in walk, trot, and canter in both directions, and Dino did great! The real sorcery though, was in figuring out how to ask Dino to adjust his body position and balance.

Turns out, it's half sorcery, half using the same skills I use in the saddle. 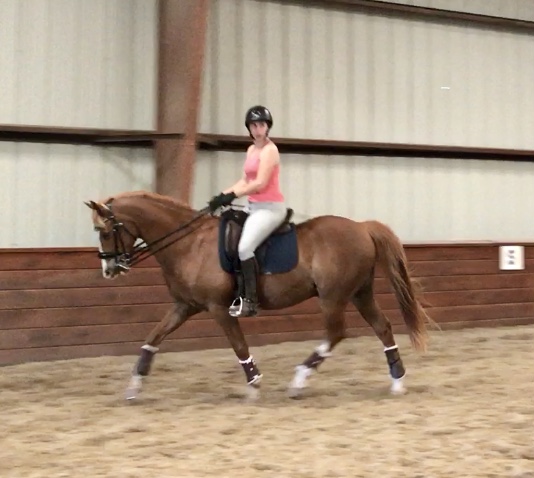 SOMEHOW, (I am pretty sure via actual magic) Dino is able to feel and respond to my upper body position from ten feet away.  As soon as I locked into "riding position" with my shoulders back and open, elbows dropped and bent, and my core and lats engaged, Dino moved into the contact, went on the bit, and lifted his frame. If that isn't legitimate sorcery, I don't know what is. Days later, I am still absolutely gobsmacked by it.

He even offered me a few steps of VERY lofty and collected trot - like thinking-about-half-steps trot - and I was totally floored at how much influence my body had over his without even sitting on him. Horses are amazing, and magical, and 25 years into this whole riding and training thing, I still have no idea how any of this works.