Put It In Drive 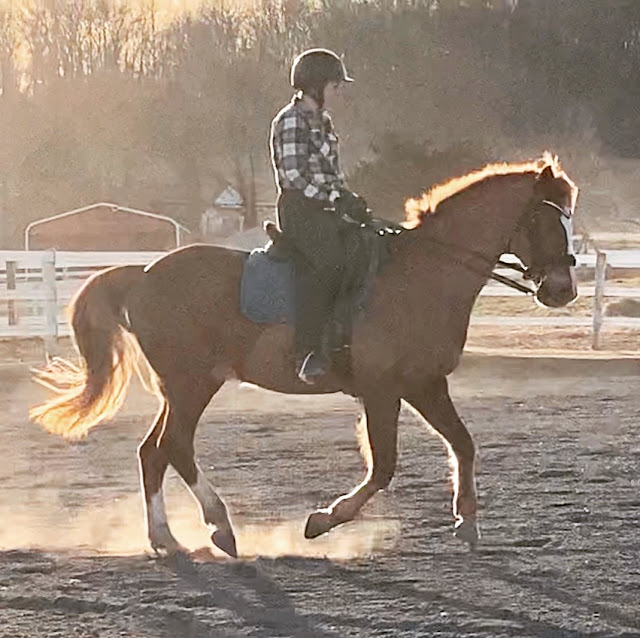 The past month in our training has been one of me getting frustrated in a movement or some aspect of Dino's response to the aid, and then realizing days or weeks later that the problem came down to a fault in my position.

Why is that always the answer?

In working with the Equibands a few days a week, I really battled with Dino's forward response. They are HARD work for him - imagine engaging all your core muscles like you're about to lift a heavy barbell. Now imagine someone's asked you to go for a jog while maintaining that posture and engagement. That's basically what working in the bands asks Dino to do, and while they made a big difference in his core engagement and posture, some days it was just tough to get him in front of the leg.

When I corrected this by sitting more towards the pommel and tucking my seat under me so that my seat bones now were plugged into the saddle, it was like I had put my pony back in "Drive". All of a sudden my forward aids were more effective because I wasn't blocking him, I could influence his back more easily, and I felt WAY more secure in the tack - especially in sitting trot!

I'd also been struggling a ton with any and all lateral work to the right - honestly just getting the right bend had devolved into a hot mess by the beginning of April. I was beginning to wonder if Dino's right stifle was out of whack again already - maybe we needed to inject the other joint compartments, or perhaps he needed a chiro adjustment. I was ready to do whatever he needed, but I wanted to see if I could fix it with training first.

The solution ended up being 50% revisiting the lateral response to my right leg, and 50% fixing the position of my godforsaken seatbones. I had an INCREDIBLE lightbulb moment this week where I realized that MY SEATBONES CONTROL WHERE THE HIND LEGS GO. Like, they are directly correlated. If I move my right seatbone forward or back by a fraction of an inch, Dino's right hind leg moves laterally exactly in response. I realized that a big part of the issue had been that my seat was blocking his body from performing the bend, and adjusting this tiny aspect of my position totally fixed the issues I was having with him coming off the rail in shoulder-in right.

This discovery is AMAZING, but it also reinforces what I learned in my last post - I have to be WAY more stable and WAY stronger to be able to have the body control I need to make these minute adjustments in my seat. The movement is one of a literal inch, and that kind of precision requires a kind of strength and stability I don't quite have yet.

Time to hit the gym!