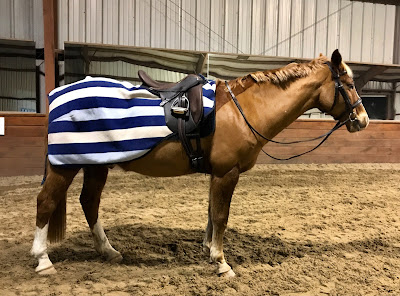 We're two weeks out from Dino's stifle injection, and I have to say I think it may have done the trick! He's felt incredibly sound since I hopped on for the first time last Wednesday. While the 2nd Level work is still not within his capabilities right now, he just feels like he's lost strength vs. being uneven and crooked and completely unable to engage his right hind leg, or bend, or connect. Interestingly, his shoulder has even improved drastically since we injected the stifle! After our ride this past Monday, there were barely any visible or palpable knots, and the fasciculations had completely stopped. Now I'm wondering if an ouchy stifle was the root cause of it all! The shoulder will still spasm, especially if it's cold out, but it's much less dramatic than before, and it seems that Dino has regained his full range of motion there again.

I'm still taking it really easy with him, but over the course of the last week I've been able to increase the amount of time that Dino works on the bit vs. on a loose rein during our half-hour rides, and he's been doing a great job stepping back up to the work. He reaches a point where he gets tired more quickly than usual, but he can DO IT! It's such a wonderful feeling to be able to influence Dino's body again, to suggest to him straightness and impulsion and to have him respond as best he can. The short bits of canter I've asked for are no longer a hot mess, and I can actually touch the outside rein in the left lead to straighten and balance him without Dino breaking to the trot, which is just such a MASSIVE improvement from where we started! He's taking full advantage of stretch breaks, and working really well over his back for the entire ride again. His energy is flowing all the way through his body again, and both of us are pretty pleased about that!
I plan on taking it slow for the rest of the winter, working mostly in the walk until Dino is strong again. Hopefully we'll be able to hit the centerline again this summer, but for now I'm just enjoying having a sound pony who can be happy in his work again.