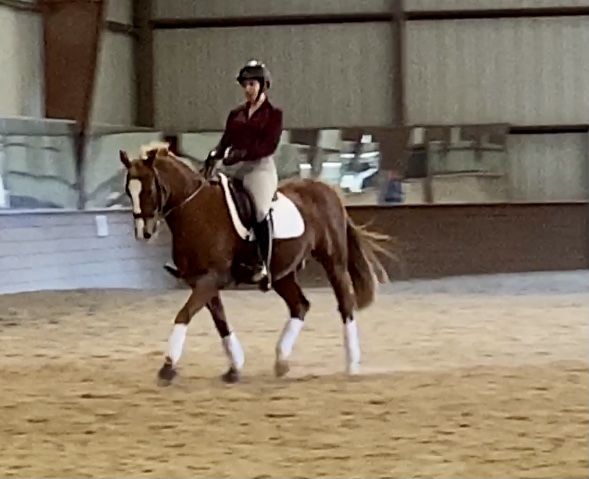 Three weekends ago we had a phenomenal first lesson in the double bridle, which you can read about here. Dino worked his round little redheaded butt off, and I was a little concerned he wouldn't be up for much on Day 2 of our back to back lesson weekend. He had worked really, really hard in a much more elevated and engaged frame than usual in the double, and even though he got an extra Equioxx in his dinner and a liniment rubdown after our ride on Saturday, I fully expected him to have much less gas in the tank on Sunday. I was planning to just see how he felt and go from there - if he was sore and tired, we could just work on my position and that would be fine! That pony owed me nothing after the work he'd put in on Day 1.

And at first, Dino warmed up pretty stiff and cranky. I had him back in his snaffle bridle, since he definitely did not need two days in a row in the double! He felt OK in the walk, but when I started to ask for trot and canter on a long rein I got a lot of pony'tude as he encountered all his sore muscles for the first time. I did just enough to get him forward, and then hung out in free walk for ten minutes or so, changing the bend and bouncing his ribcage back and forth, getting him to stretch over his back, and generally trying to help Dino feel a little looser and more comfortable.

By the time Ashley was ready for us, Dino was feeling much better! All the loosening up we had done at the walk really helped him, and he felt happy and comfortable and ready to rock and roll. I asked to work on the lateral work, which we hadn't touched on in the double the day before. I showed Ashley a bit of shoulder-in at the walk, which had definitely improved since the last time she saw it, and then we got to work on making Dino's hind end response snappier in the turn on the forehand.

It was here that I heard, "Keep your whip over your thigh, woman!" for the first of many, many times during this lesson. Part of the issue with my slow timing in reinforcing the responses I want from Dino is that it just takes me way too long to get my aids (or whip or spur) where I need them to be. So we worked for a bit on me keeping my whip up over my thigh (instead of down by his shoulder) and tapping Dino on the bum as his inside hind leg started to lift up and cross over into the turn on the forehand, encouraging a snappier response and a quicker hind leg action. Ashley wanted me to be really picky about how snappy his hind leg came up off the ground, and not accept a slow, slithery movement. My timing was, as usual, not great for a lot of it, but when I got it right Dino responded really well. The turn on the forehand continues to be a place where I can have a lot of really productive conversations with him about lateral work and responsiveness, and this exercise set us up very nicely for the rest of the lesson. 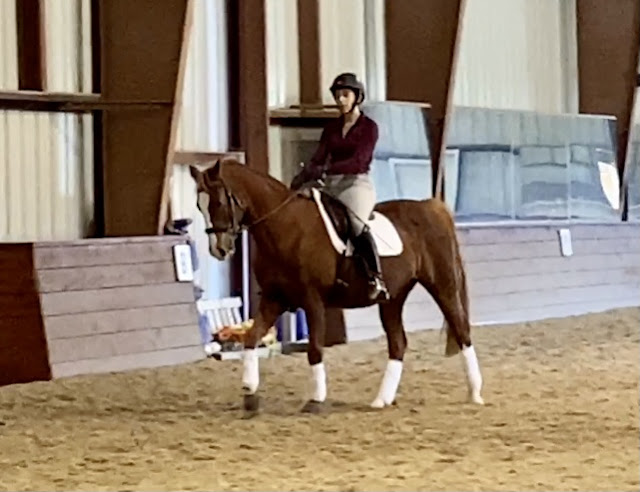 I also noticed in the initial walk work how much I needed to still keep a good solid hold of the reins even in the snaffle bridle - when I didn't have that steady contact that I had established with the double the day before, Dino bopped his head all around looking for it. It wasn't a matter of me pulling the reins to establish contact, but making the bit a stable place for Dino to rest and for us to communicate with each other. Working in the double definitely made me much more aware of how the connection should feel, and the kind of stability in the reins that Dino needs me to maintain! Keeping everything solid helped Dino stabilize himself on the bit so that he could really lift up through the base of his neck and his withers,

I had mentioned to Ashley that while I had recently had a REALLY good session with Dino on the subject of haunches-in, it was still a difficult movement for us, so we played around a bit with different ways to encourage him in the movement and explain it more thoroughly.

We started with shoulder-in to renvers, which really confused me at first and I tried to go from shoulder-in to shoulder-out. (I don't know the fancy French word for that position.) But once I got it in my brain that we were going from shoulder-in to haunches-out - instead of thinking "shoulder-in but swap the bend," it made way more sense. I practiced a bunch at the walk until I was able to coordinate the movement, and it was a great exercise to reinforce for both of us that my leg positioning changes the bend, and helped me move the shoulders and haunches independently, which had been improving with practice on my own but I definitely needed help with!

Next was haunches-in, which is still the lateral movement I struggle most with, especially to the right. I had to work to get Dino a little softer and rounder in the base of his neck as we started this work; when he got tight in that area his whole body got a bit blocked and I had less influence over his bend and the position of his haunches. I had to explain to him a couple times via almost halting and asking for a step step of turn on the forehand that I wanted the haunches to move to the inside, and it was slooooowww going to work through getting a good response, but it was really excellent, productive work and I was glad to have Ashley's supervision as I worked through it. Once we had had some success with that method, Ashley asked me to walk on about an 8m volte, keeping the bend as we came through the last 1/8th of the circle and riding straight in haunches-in position. I found this exercise MUCH more difficult than working this movement on a straight line, and Dino seemed to have a harder time holding the position for more than one step, but it was good to have another tool in the lateral work toolbox!

At this point Dino got a little sticky off the leg, so I moved him into trot and he gave me a SUPER LOVELY trot! So we just went with it and started doing al our lateral exercises in the trot. I found it a little easier to work in trot - the added impulsion and clearer rhythm made it all a bit easier to ride. 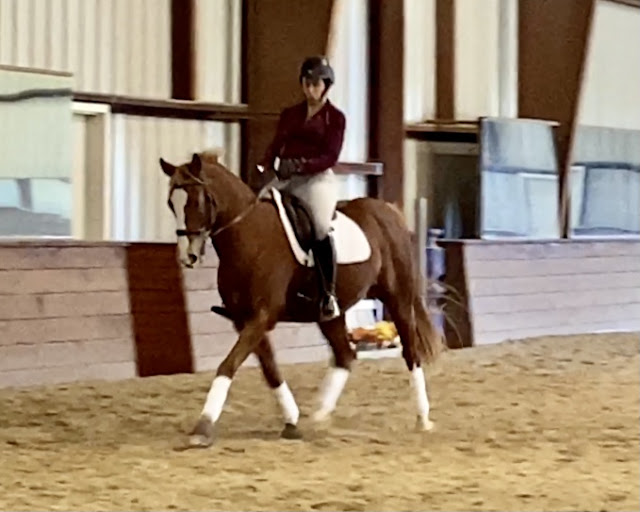 Dino also began to really shine in the trot! He seemed relieved to leave some of the more tedious positioning work behind and I think he was really having FUN in the trot work! We practiced shoulder-in to renvers in trot, which Dino absolutely NAILED, and then after coming around the short side Ashley had us come across the long diagonal in medium trot, downshift back to collected trot, then back to shoulder-in to renvers on the next long side.

It was some of the most phenomenal work I've ever felt out of Dino, ever, and it was SO COOL! He was light and bendy off my lateral aids, perfect in the connection, and in the medium trot he grew ten hands in his withers as he blasted across the ring. The down transition to collected trot was so strong and balanced, and Dino just powered right back into the lateral work. Video clip below of one of the greatest, most fun moments of our dressage journey so far!

After a short walk break we worked the canter for a little bit, just to touch it. Dino was, of course, absolutely perfect in canter and very willing to work a bit of shoulder-fore and leg yield. This was harder for me than in trot, but when I got the angle of the shoulder-fore right and the leg yields steep enough, I could really feel the collection improving and his hind legs coming up under my seat. It was also just a great exercise for straightness and control of the haunches in canter, which we'll definitely need as we continue to improve and learn more difficult movements. Dino also gave me a SUPER canter-walk transition when we changed direction - unsurprisingly because the canter was so balanced and collected it was just right there. I ended the lesson absolutely BEAMING, and Dino was so proud of himself!

Our homework was to continue practicing the renvers, to get Dino stronger in that position so it will carry over into the haunches-in, as well as work on getting the leg yield in canter to be a bit steeper to truly get the benefit of that exercise. But, overall, Ashley was thrilled with us and I've just got to keep on doing what we're doing! I'm so, so proud of Dino and how far we've come in the last year or so, and am just having an absolute blast learning dressage with him. He is so special, such a gift, and I am just constantly amazed by how he keeps blowing me away. Thank you, buddy. 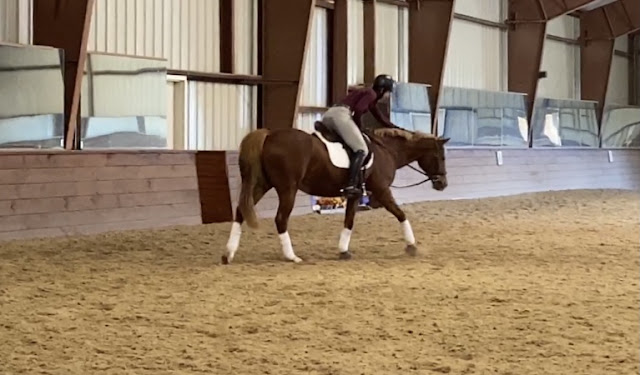